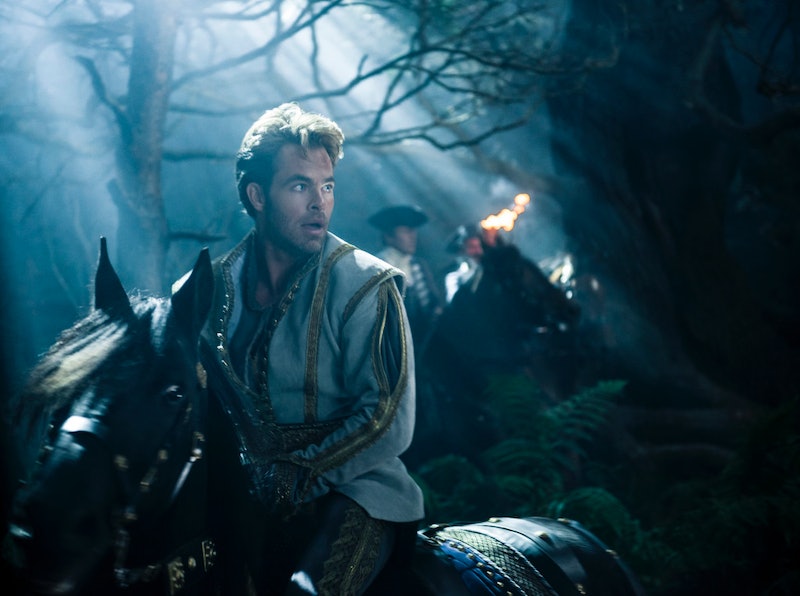 Chris Pine is an attractive lad, to state the obvious. He's also really good at playing a douche-y bro, hence his casting in 2014's musical epic Into the Woods . For the uninitiated, the Rob Marshall directed film pokes fun at classic fairytale tropes, and is "a modern twist on the beloved Brothers Grimm fairy tales in a musical format that follows the classic tales of Cinderella, Little Red Riding Hood, Jack and the Beanstalk, and Rapunzel — all tied together by an original story involving a baker and his wife, their wish to begin a family and their interaction with the witch who has put a curse on them." Pine takes on the role of Prince Charming (simply credited as Cinderella's Prince), while Billy Magnussen plays his brother, Rupunzel's Prince.

The brooding and blonde royal bloodline beauties (sorry) share a song in the Broadway play called "Agony", perfectly adapted for the film. The song follows Cinderella's Prince and Rapunzel's Prince meeting and comparing the misery of their new-found and unobtainable loves. Prince Charming's love is Cinderella, a princess who can't make up her mind, and runs away from the Prince after every evening they spend together. Slightly more palpable, Rapunzel's prince must deal with the impossibility that his love is locked in a tower with a rope ladder for hair.

But who's love is stronger? Who is in deeper agony over their circumstance? And most importantly, who can rip his shirt open wider? Some choice lyrics include:

[RAPUNZEL'S PRINCE]You are everything maidens could wish for!

It is the most satirical and enjoyable bit of the film — akin to Channing Tatum's first big dance number in Magic Mike — all excess and fluff, save the very serious matter of Chris Pine's chest hair. Featuring the two princes splishing and splashing in a waterfall of their misery, some very, very tight pants, and a general stench of frat boy mentality, it is a musical number not to miss.

Though you'll have to wait until December 25 to see Pine's exceptional rendition of Stephen Sondheim's "Agony" in theatres, here's another version, with Chuck Wagner as Rapunzel's Prince, and Robert Westenberg is Cinderella's Prince to tide you over: