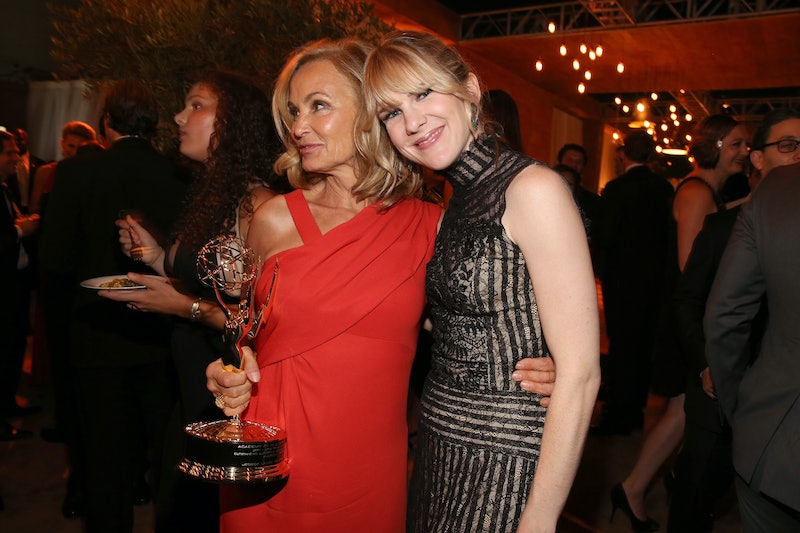 It's something we've waited all season long for, and now the moment is finally upon us: Lily Rabe will appear in AHS: Freak Show 's tenth episode "Orphans," where she'll reprise her role as Asylum's sweet nun, Sister Mary Eunice. (Remember, these are her pre-devil possession days.) And while we can all surmise that Pepper is the main cause for Sister Mary Eunice's presence, very little is known as to what exactly happens during their actual interaction that officially collides of these AHS worlds. Is Rabe there to take Pepper away to Briarcliff? It's definitely possible, given that Wednesday's episode synopsis states that "the death of a Freak sparks troubling behavior in Pepper." Sister Mary Eunice may be forced to step in and take Pepper from her Freak Show family for good.

However, I was originally under the impression that Pepper was sent straight to Briarcliff after being accused of drowning her sister's baby (even though her brother-in-law was the true culprit). So there's an equally good chance that this horrific event has yet to happen. After all, Elsa recently revealed in "Bullseye" that she found both Pepper and Salty in an orphanage. "Even your sister didn’t want you anymore," Elsa angrily recalled. "Your family sent you away. You’d still be lying there, in that urine soaked mattress, starving, gnawing on rats if I hadn’t pulled you into the spotlight.”

If Pepper had already been accused of that murderous crime, her sister's logical next move would've been to send her away to a mental asylum or jail, not an orphanage. So I'm betting all of that has yet to transpire. This means Sister Mary Eunice may actually be behind reuniting Pepper with her family, eventually leading into the storyline we've come to know in Asylum. Either way, though, I'm fairly certain this will all culminate in Pepper's departure from Freak Show. (Sad face.)

But surly Pepper won't be the only AHS: Freak Show character Sister Mary Eunice will interact with during her Season 4 stay. (I mean, what fun would that be?) And I just so happen to have a few suggestions of which co-stars I'd love to see Rabe go toe-to-toe with.

Aside from the fact that it would be downright amusing to see Sister Mary Eunice come face to face with a Sister Jude look-alike (please have her mention the similarity!), it would also make complete sense for these two to meet and discuss Pepper's future. For all we know, Sister Mary Eunice was associated with the orphanage Elsa "rescued" Pepper and Salty from way back when. (It would also help explain what a Massachusetts nun is doing in Jupiter, Florida.) She may have made it her mission to track Pepper down and return her to either the orphanage itself or her family. And I'm sure Elsa will have a few words to say about that. (Don't make her get out her S&M cane!)

Last we saw, Jimmy wasn't doing too well what with being thrown in prison after being wrongfully accused of Dandy's "Tupperware Party Massacre." What if he's given the death sentence and someone from the sideshow asks Sister Mary Eunice to go perform his last rites? It'd be a nice twist to see Ryan Murphy use Rabe for more than just one storyline here, and this presents him with the perfect opportunity. Though, I must admit, I hate the idea of anything else happening to Jimmy. Poor guy has been through enough already.

OK, fine, I highly doubt this interaction will happen, but oh man would it be amazing. To see the show's most innocent character collide with its most villainous would truly be a glorious sight to behold. Plus, it would give Sister Mary Eunice her first taste of evil, which we all know will play a big role in her future. Dandy may consider himself a God among men, but this nun is just mere years away from being possessed by the Devil himself.

More like this
Here’s What 'Sister Wives’ Star Christine Brown Has Been Up To Since Leaving Kody
By Grace Wehniainen
Mike Flanagan Teases 'The Midnight Club' In This Exclusive, Creepy Clip
By Grace Wehniainen
Paul Mescal, Man Of Mystery
By Samantha Leach and Heather Hazzan
Caleb McLaughlin Details Racism From 'Stranger Things' Fans
By Radhika Menon
Get Even More From Bustle — Sign Up For The Newsletter