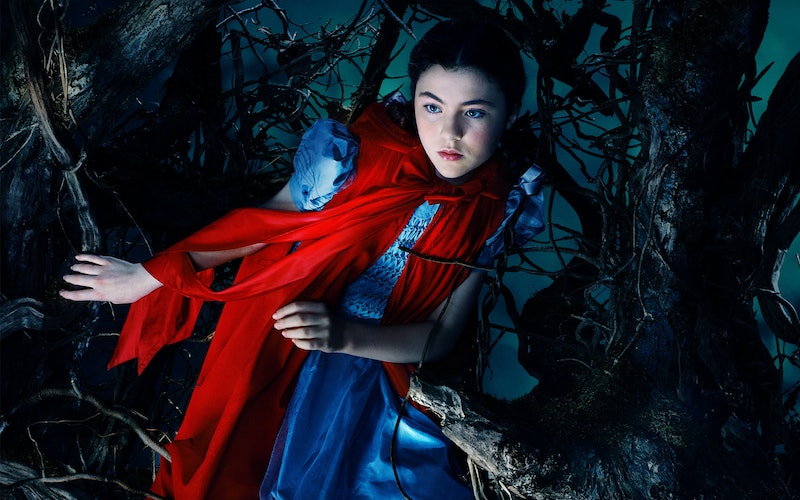 I loved almost everything about 2014's big screen adaptation of Broadway's Into the Woods . From the epic musical numbers to the undeniably perfect casting (Chris Pine as Prince Charming, anyone?), the Disney-fied iteration was everything one could hope for in a Christmas Day release — save one scene. For the most part, the could-have-been cheesy adaptation strayed away from anything too cutesy (it is a satire, afterall), but one scene, in which Red Riding Hood is eaten by the Big Bad Wolf (played by a very creepy Johnny Depp), had me cringing. It also made me wonder how Little Red Riding Hood survived being eaten by the wolf.

After she arrives at Granny's in the house in the tree in the woods, Red is shocked to find her grandmother looks a little odd: Big eyes, big ears... you know how it goes. And once she steps too close, the Wolf devours her whole. Yikes. That should be it, right? Red's in the Wolf's stomach and is dead and gone. But lucky for Red, the Wolf's digestive system proves to be a perfectly livable place, and she even finds dear 'ol Granny in one piece.

I'm very curious to know how long the two could have survived in the pit of the Wolf's stomach (with it's billowing sheets as stomach lining, looks eerily similar to that love-making scene in Pearl Harbor). But Red and Granny are only in Depp's digestive track for a brief time, as the Baker comes to the rescue, cutting open the stomach of the Wolf and pulling out the pair — because apparently that's just how things work in the woods. Perhaps if Red had been swallowed with a knife on her person, she could have cut herself out? But I think we're all thoroughly nauseated exploring these options.

Go see Into the Woods, out December 25, because almost all of it is better than this one confusing and silly scene.