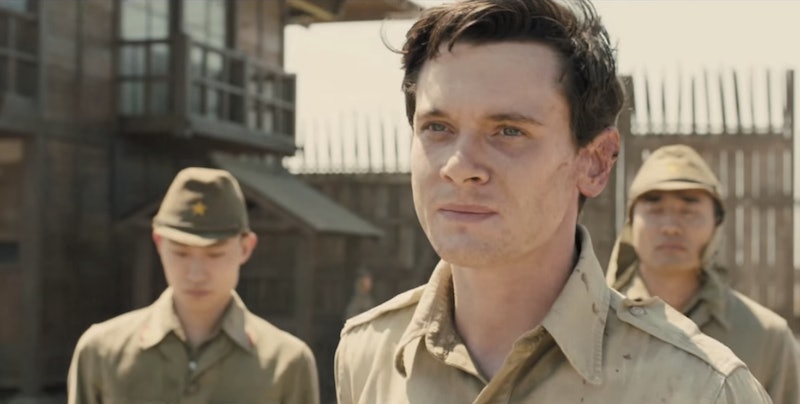 I'm sure that Unbroken will be haunting everyone's dreams — and hearts — for many months to come, but the film is noteworthy for more than just being directed by Angelina Jolie. It tells the true story of Louis Zamperini, who passed away in September 2014, and with him went the final survivor of the plane crash depicted in the film. Without his words and his memories, all we have are books and photographs, and now this film, to help us piece together the true story of what happened. In Unbroken, Jack O'Connell, as Zamperini, is interned at Ōfuna POW Camp and left at the mercy of Mutsuhiro "The Bird" Watanabe. But what did Ōfuna POW Camp look like in real life?

There are very few pictures of the inside of the war camp, which was, at the time, a secret POW camp that was never officially reported as such and was run by the Navy instead of the Imperial Japanese Army. It was also only one of the many camps at which Zamperini was interred in Japan, but it's certainly one of the most memorable. Zamperini was also far from the only high-value POW being kept at the camp; combat pilot Pappy Boyington and submarine commander Richard O'Kane were held there as well.

The few photographs that were found of the Ōfuna Camp were found at Mansell, a website devoted to hosting the research about World War II prisoners of war. One particularly haunting photograph shows POWs being released from Ōfuna Camp and bowed to by the same Japanese officers who reportedly abused them during their time there.

All the remaining pictures that Mansell has of Ōfuna Camp feature the POWs leaving it, waiting for a train that will finally take them home, and there don't appear to be many pictures of the camp itself — at least not from during World War II. For that reason, it's a blessing that Jolie had resources like Zamperini himself, as well as the novel version of Unbroken, to guide her in recreating that horrifying time in Zamperini's life for the audiences.

Check out more of the haunting photographs below.