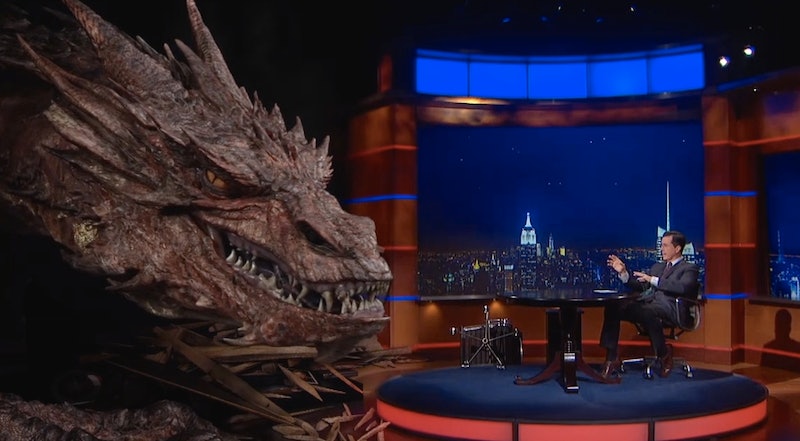 As a celebration of the last new episodes of Colbert Report ever (sob), Stephen Colbert covered Entertainment Weekly dressed as Lord of the Rings characters like Legolas, Gandalf, and his other favorite characters from J.R.R. Tolkien world. Even though the Report skewers American politics, for those who watch the show, it came as no surprise that Colbert would choose to wear his Middle Earth finery to commemorate his final appearance on Comedy Central. Colbert is a HUGE Lord of the R ings fan, and he's even incorporated Tolkien into his show many times. It's fitting that the final Hobbit movie and the last ever episodes of Colbert are happening concurrently — just as the beloved fantasy series releases its final volume, The Colbert Report will air its final new episode on Dec. 18.

And as we go into 2015, it will be the first year since 2001 that we haven't had one or both of those beloved franchises to look forward to. Peter Jackson's original Lord of the Rings trilogy made way for other fantasy to be cool, like the TV adaptation of Game of Thrones. And Colbert has blazed the way for political satire to lean hard into the fear mongering of the 24-hour news cycle, adding a fantastic false pundit to the airwaves that truly does take aim at both sides of the aisle.

So to honor the man who loves Middle Earth and its eons of history, here are the Colbert Report's most memorable Tolkien homages:

Honorable Mention: His Appearance at Comic-Con

This wasn't a moment from the show, so technically it shouldn't count, but it's too eloquent and heartfelt to leave out — the rare genuine moment from a devoted satirist.

British author and actor Stephen Fry appeared on the show to discuss a trivia contest that went down on the set of The Hobbit between Colbert and screenwriter Philippa Boyens. The bemused Fry then breaks the news: somehow, Colbert won.

Here's one for the book fans. One of the more popular characters from the Lord of the Rings book series, Tom Bombadil, was excised from the movie version to save time. When author Neil Gaiman mentioned that he wasn't a fan of the Bombadil.com, Colbert casually proved his nerd bona fides by busting out some of Tom's song like it was nothing.

5. Colbert and Back Again

You might be wondering why this isn't rated higher. A whole week devoted to The Hobbit, complete with a new set and Hobbit themed interviews? It's not that this wasn't filled to the brim with Tolkien references, but it ended up feeling a little like a super-long commercial for The Hobbit… which any Tolkien fan could tell you is a little self-indulgent compared to the fast-paced novel.

4. His Showdown with James Franco

Ahh, James Franco, what a dilettante. You can't beat Colbert at the LotR game! He lives and breathes this stuff. So he totally schooled Franco with a few well-chosen tidbits from The Silmarillion.

Of course, the Colbert character played it off as a trifle, but the actual Stephen Colbert must have been thrilled beyond belief to receive what looks like a genuine copy of Andruil, Aragorn's mystical sword forged from the shards of Narsil.

Some breathtakingly beautiful CGI and Benedict Cumberbatch recording some voiceover made what could be hokey into a jaw-dropping visual spectacle. Whoever decided to interpret Smaug as a hardline fiscal conservative is a genius. And whoever threw in the "Stand Your Ground" joke? They're certainly not ball-less.

It's not just the nerdiest entry on the list, it also proves just how well Colbert was able to weave his love for Tolkien into a salient political critique. And he did it all with action figures — that's the dream.

More like this
The First 'Percy Jackson & The Olympians' Teaser Comes With An Ominous Warning
By Grace Wehniainen
Margot Robbie Breaks Her Silence On *That* Viral 'Barbie' Moment
By Maxine Harrison
Harry Potter's Viktor Krum Has Undergone A Huge Transformation Since Hogwarts
By Sam Ramsden and Meguire Hennes
Nicola Coughlan Shared A Lady Whistledown Excerpt From ‘Bridgerton’ Season 3
By Grace Wehniainen, Alyssa Lapid and Sam Ramsden
Get Even More From Bustle — Sign Up For The Newsletter