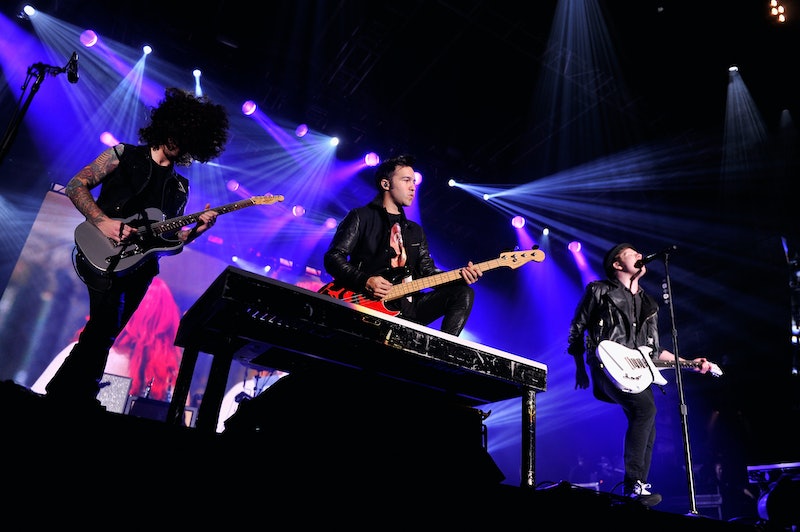 In case you didn't see it, Fall Out Boy's performance on The Voice finale was one of their best live performances in a long time — and Matt McAndrew completely held his own. To everyone's dismay, the four members of the 13-year-old rock band decided to take a break at the end of 2009, but now that their hiatus ended, Fall Out Boy is back with a vengeance. Their Voice performance could have been a crucial turning point in the band's comeback career and I can't wait to see what 2015 has in store for them.

Tuesday marked The Voice finale and for the first time ever, four unbelievably gifted artists have a shot at the title. After FOB singer and lead guitarist Patrick Stump guest-mentored for the contestants earlier in the season, the American rock band was added to the list of performers to join force's with Team Adam's own rocker Matt McAndrew. The five of them absolutely killed Fall Out Boy's newest single "Centuries," and the song rocked even harder than last album's smash hit "My Songs Know What You Did in the Dark (Light 'em up)."

Since Matt's performances have been topping the iTunes charts each week, this performance could end up being a major catalyst for the success of Fall Out Boy's sixth studio album. The video for their next single "American Beauty/American Psycho" also debuted this week. So with any luck, the collaboration will direct fans of the rock band to the music video so that it may have as much success as "Centuries" has this year.

Regardless of who wins the title, Matt's collaboration with one of America's favorite bands was an unforgettable Voice moment. Videos will be posted as soon as The Voice has a winner and NBC gives us the go ahead to watch and re-watch the finale online.

More like this
Kesha Is Down To Be The Next Bachelorette
By Jake Viswanath
How Ghosts Inspired Kesha’s New Music
By Jake Viswanath
Jason Derulo Is Launching A New Singing Show In The UK
By Maxine Harrison
The 'Love Is Blind' Season 3 Trailer Teases A Possible Fiancée Swap
By Kadin Burnett, Grace Wehniainen and Gabrielle Bondi
Get Even More From Bustle — Sign Up For The Newsletter