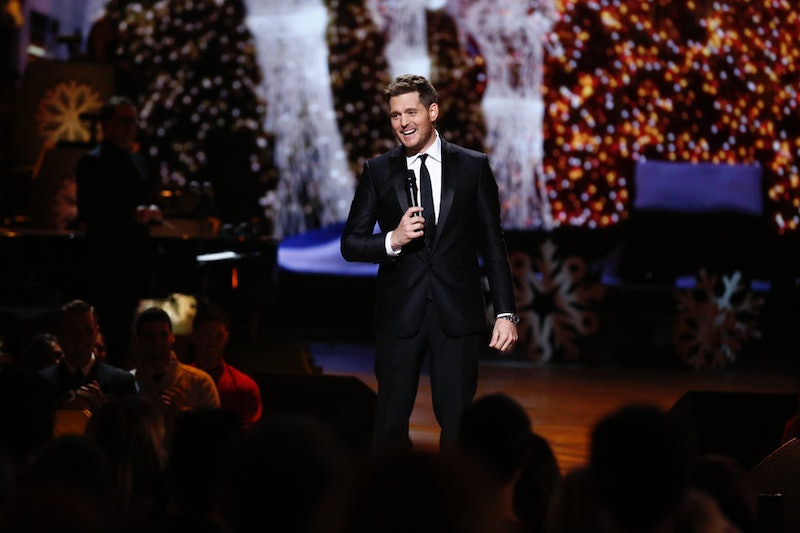 If you're one of those people who NEEDS more Christmas music in your life all the time, don't worry, more is coming your way. On Wednesday night, NBC will air the fourth annual Michael Bublé's Christmas in New York special, because we can never have enough Michael Bublé in our lives. He will be bringing you all your favorite Christmas music, as sung by the adorable crooner and his very special guests (like, Miss Piggy and Barbara Streisand). So, when all is said and done, where can you download the Michael Bublé's Christmas In New York songs?

Thankfully, you won't have to wait too long for many of these Christmas songs to drop — a lot of them are already available on iTunes. If you're not a Bublé devotee, you might not realize that the man already has a Christmas album out, appropriately titled, "Christmas." There are of course different versions of that album, like the one you can buy only at Target (fine, I'll go shopping at Target again, OK?) and the deluxe edition that dropped in 2012. Obviously, all of these are available on iTunes right this very instant for your Christmas music fix. You can literally have his whole Christmas collection downloaded to your cloud in less than five minutes.

But, how about the songs from the Christmas special?

That one might be a little bit trickier. In years past, Bublé's collaboration for his specials haven't been released in any format — whether on iTunes, CDs, or even on NCB's website. So you might be stuck just watching the videos of the performances. There is always the hope that the singles could be released for purchase, whether it be on his website or through NBC, but it doesn't look likely as of now. Unless someone can persuade Miss Piggy into giving up those musical rights.

Also, anyone else kinda mad that Idina Menzel isn't one of the special guests for this event? How are we supposed to see her and Bublé perform "Baby It's Cold Outside" with their adorable child counterparts? At least that's 100 percent available for download, though sadly it might be our only new Bublé Christmas tune this year. Bah humbug.