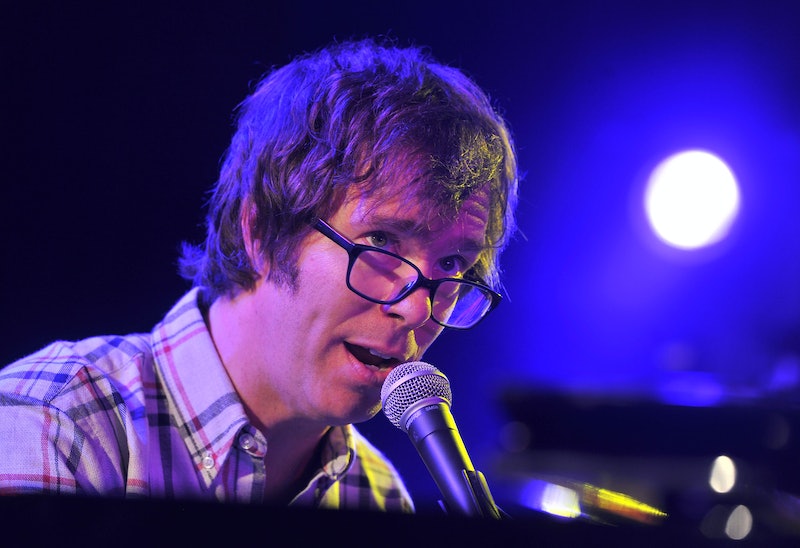 The Sing-Off has gone through some serious changes. The NBC a cappella reality competition started off as a limited, December-only event, then grew into a full fall series, and now has shrunken down to a one-night-only special. With that, there's been some lineup changes as well. The judges are now Jewel (Sara Bareilles is still gone), Shawn Stockman (of Boys II Men), and Patrick Stump (of Fall Out Boy). But, hey, why isn't Ben Folds returning to judge The Sing-Off ?

There's a simple explanation: Ben Folds is on tour — and not anywhere close to where The Sing-Off tapes, either. If you want to see him this week, you have to head down under to Melbourne, Australia. And this isn't just any tour, either: The singer/songwriter has undertaken what's been called "a tour of symphonic proportions," where he'll be backed by different orchestras and will perform his own piano concerto. That's not something you can ditch to do a one-night gig on The Sing-Off.

Still, it's a bummer. I'm only mildly interested in a cappella — though I have seen Pitch Perfect about 400 times (but that has more to do with the fact that it seems to be playing on a loop on HBO) — and I still watched The Sing-Off, mainly for Folds. Here's what made him the best Sing-Off judge ever.

He Knew What He Was Talking About

Folds was into a cappella, even before The Sing-Off. How do I know? He produced an album, Ben Folds Presents: University A Cappella, where a cappella groups from different colleges arranged and sang his songs. So Folds actually knew what he was talking about. When he judged on The Sing-Off, he went deeper than just talking about whether or not the singing was sharp or flat. He was so technical about the arrangements that sometimes it confused the other judges (or host Nick Lachey).

I found that refreshing, though — it made the Sing-Off different from other singing shows, where they talk about the performers' "spirits" in an abstract way. If you watch about five minutes into the clip above — and you should, because it features everyone's favorite Sing-Off alums, Pentatonix, in their first performance on the show — you can see what I mean. Way to not dumb it down, Folds.

And it sounded great. I mean, he already thought about the best ways of arranging his music so it would sound good when performed a cappella

. Doing it again for live TV is only natural. I may be biased because I'm a fan, but, when they'd get the groups to perform songs by the judges, his songs always sounded more layered than the others. I've seen Folds divide the audience for his concerts into three parts and do three-part harmony, so he's definitely into it, and it sounds even cooler in person.

He Would Crack Up Shawn Stockman

Don't get me wrong: I am glad that Folds took the music seriously, and got down to business to mentor the different a cappella groups. On the other hand, though, music should be fun. There's just something about seeing two grown men giggling at a judging table is a good reminder of that.

More like this
Jason Derulo Is Launching A New Singing Show In The UK
By Maxine Harrison
18 Years After 'American' Idol, Jennifer Hudson & Simon Cowell Reunited On Her Talk Show
By Radhika Menon
Kathy Hilton May Not Return To 'RHOBH' — At Least Not Full Time
By Jake Viswanath
'Big Brother' Is Already Looking For New Houseguests To Compete In Season 25
By Brad Witter
Get Even More From Bustle — Sign Up For The Newsletter