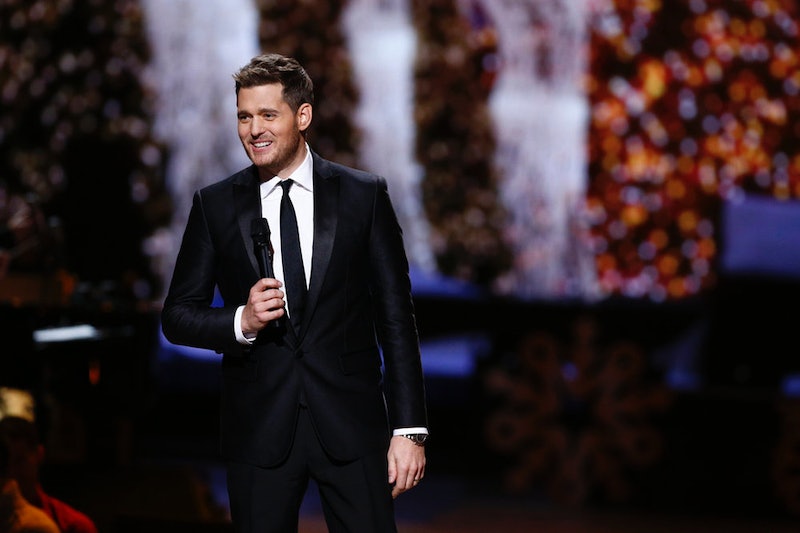 I'm all for starting the holiday season early, but for me, early is the week before Thanksgiving, not before Halloween. Unfortunately, Michael Bublé’s Christmas in New York television special doesn't prescribe to the same beliefs as me, since the holiday special, which airs Wednesday, Dec. 17 on NBC, was filmed at the end of October. So when you were dressed as Elsa letting it go, or as one of the Game of Thrones characters, Bublé and guests were singing holiday songs, dreaming of a white Christmas.

This year is the fourth annual Christmas special that Bublé has hosted for the network. If you are a holiday-obsessed, Whoville wannabe, the Christmas in New York special should definitely be put on your calendar. Not only is Bublé the king of Christmas songs, but he has a slew of talented guests joining him on stage this year to really ring in the holiday.

Among the star-studded lineup this year: Barbara Streisand, Ariana Grande, Miss Piggy (...?), and the Radio City Rockettes (which is where the special is being held). The hour long special will consist of some of the best holiday songs like "It's Beginning To Look A Lot Like Christmas," "Christmas (Baby Please Come Home)," "All I Want For Christmas Is You" (Oh, please let Grande sing this one), and more.

The special, although being filmed in October, was filmed in front of a live audience. So while we won't get to enjoy the idea of everything happening live, at the very moment it hits our television screens, we will get to feel the energy that a live audience brings to a taping (as long as there aren't too many HAHAs at bad jokes, I'm OK with a live audience).

Because the show is of the variety sense, any small malfunction that could occur during the hour broadcast could affect the run time of the show. We couldn't possibly miss seeing Miss Piggy do whatever she is set to do on stage if a microphone goes out, right?

The most reasonable explanation to the show being filmed in October is the fact that getting stars like Streisand, Grande, and Bublé (sorry, and Miss Piggy — I'm sure she's very busy) together in one place is probably a chore in itself. Scheduling performers like that isn't easy, and October — no matter how un-merry it is — might have been the only option.

No matter the time they filmed the special, the Christmas spirit that Christmas in New York brings will surely ring true to those of us shivering with excitement and dangerously low body temperatures.

More like this
We Still Have A Few Unanswered Questions At The End Of 'The Suspect'
By Sophie McEvoy
10 Stranger Things-Inspired Halloween Costumes For True Fans
By Emma Carey
Gisele Bündchen Appears To Address Those Tom Brady Divorce Rumors
By Radhika Menon
Paul Mescal, Man Of Mystery
By Samantha Leach and Heather Hazzan
Get Even More From Bustle — Sign Up For The Newsletter