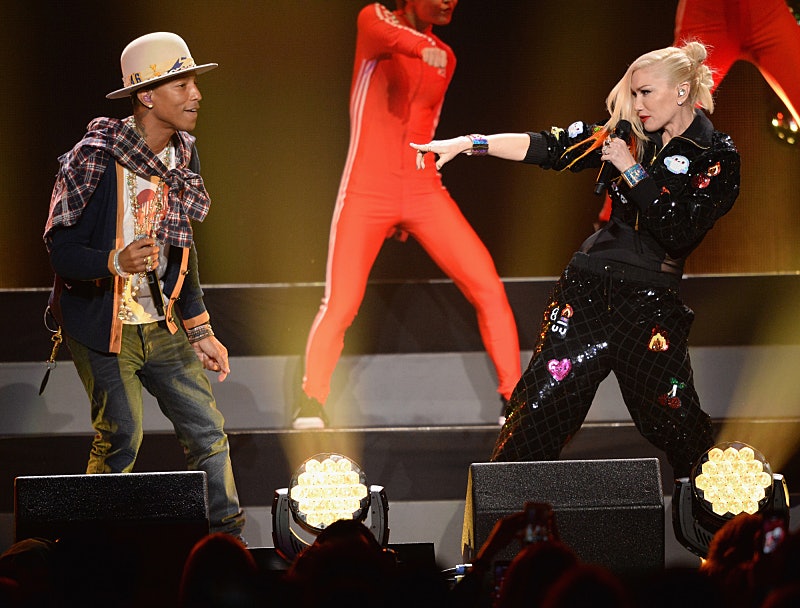 December is a month of so many holiday traditions that sometimes, it's hard to keep up. You've gotta cook some latkes and light the candles on the menorah during Hanukkah. You have to put up a Christmas tree, deck it out, and post a photo of it to Facebook. And New York City radio station Z100 has it's annual iHeart Radio Jingle Ball concert at Madison Square Garden, featuring only the biggest names in music from the past year. The concert already rocked MSG last Friday, but don't fret — you'll have another chance to watch the iHeart Radio Jingle Ball on The CW on Thursday night.

Unfortunately, The CW's airing of the sold-out show will only show two hours of highlights from the four-hour concert. But still, you'll be able to enjoy awesome performances from Taylor Swift, Ariana Grande, OneRepublic, Maroon 5, Iggy Azalea, Sam Smith, Meghan Trainor, Jessie J, Pharrell, Calvin Harris, Rixton, Rita Ora, Shawn Mendes, 5 Seconds of Summer, Charli XCX, Nick Jonas, and others. And you'll be able to do it from the comfort of your own home (and pajamas, if that's what you're into). Here's where you can and can't stream one of NYC's biggest concerts and Christmastime traditions.

As I mentioned above, the network will air highlights of the concert — essentially half of the whole show. This was also an event in which folks kept promising that we should all expect the unexpected and lots of surprises, so you have to wonder what will make the cut on Thursday night. And is it still a huge surprise if the people at the concert were there to see it? One day we'll know the answer.

Last week, Yahoo live-streamed the iHeart Radio Z100 Jingle Ball exclusively. Unfortunately, now that the live event is done and over, the site has taken the video down and replaced it with a video called "iHeart Radio's 5 Things You Need to Know About Jingle Ball." It's actually not very interesting and the site won't let me embed it, but it does feature Ariana Grande, if that matters to anyone.

But who knows? The stream could show up on Yahoo again.

During the megaconcert last week, NYC's Z100 and iHeart Radio stations across the country broadcast the concert live. Once again, those radio stations didn't archive the streams nor the broadcast. This literally forces those of us who couldn't be in the MSG crowd on Dec. 12 to watch The CW's concert highlights on Thursday night. But again, maybe the archived streams will show up again at a later date.

Images: Jeff Kravitz/FilmMagic via The CW, The CW; Jason Merritt/Getty Images for iHeartMedia (2)