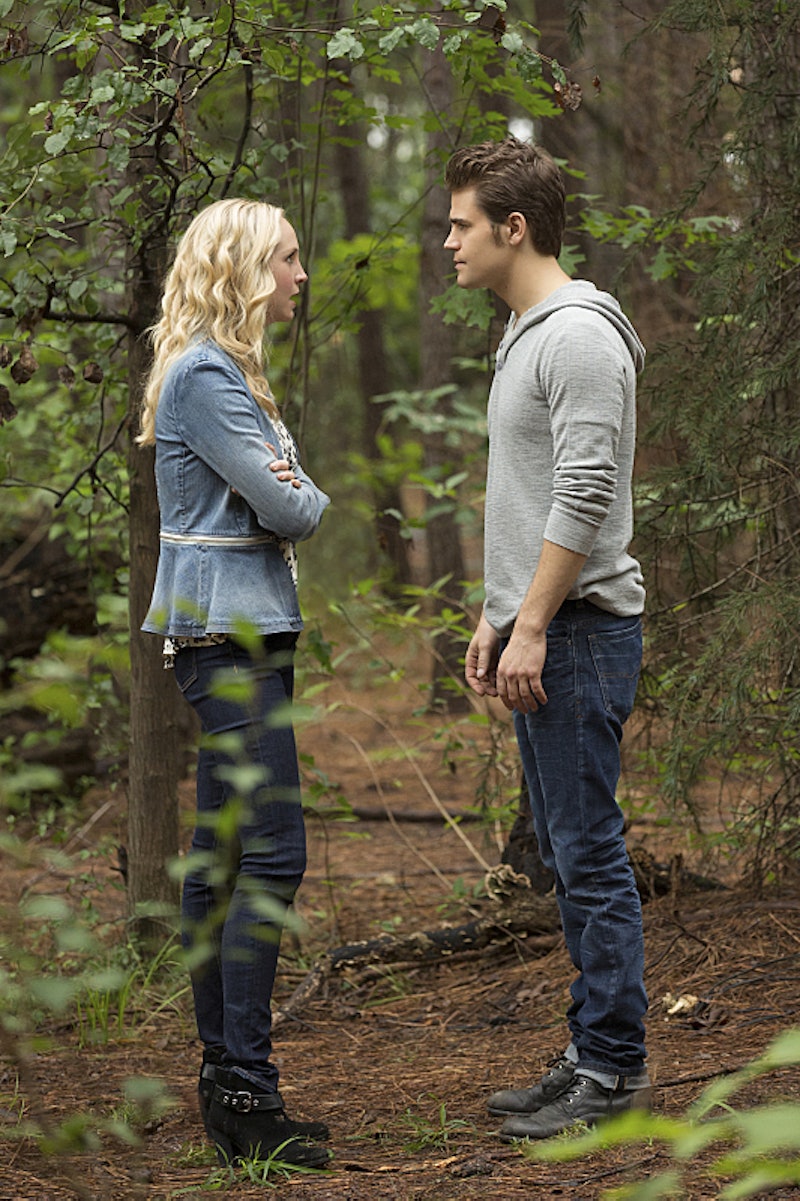 Could the wait finally be over? For years fans have wished, hoped, and prayed to the God that is Julie Plec to make Steroline happen, and it looks like 2015 may be the year she decides to make that dream a reality. (Quick, somebody pinch me!) Gone are the days of wondering, "Will Stefan and Caroline ever hook-up?" We know they will, so now it's just a matter of narrowing down exactly when, though I'm nearly 100 percent confident it'll be by the end of the season. What makes me so sure? Let's just say a little birdie suggested as much.

After The Vampire Diaries ' midseason finale last week, Plec took to Twitter and began divulging a ton of TVD -related spoilers to her followers about what they can expect in the coming year. And boy-oh-boy were they full of some telling implications.

Not only did she confirm that Bonnie will return to present day Mystic Falls, but she gave multiple clues that a Steroline romance was on the horizon. And I'm not talking vague clues either. "Stefan Salvatore fixes a friendship…and then some," Plec quipped, clearly indicating that forgiveness might not be the only thing Caroline offers to Stefan. (Hint, hint. Wink, wink.) Then there was this promising little tidbit…

Followed shortly by this intriguing tease…

So yeah… clearly this is going to be a fantastic year and all roads seem to lead straight back to Caroline and Stefan. And while I admit, I've never been a huge Steroline supporter myself (mostly due to the fact that I'm a non-recovering Klaroline addict), I'm intrigued to see how their chemistry will play out on-screen. After all, it wouldn't be the first time TVD surprised me with an unlikely but dynamic couple. But, of course, it's impossible to completely confirm that Stefan and Caroline fall under the "hook-up" section of that sentence. However, given everything else Plec's indicated about them, it feels like a solid assumption.

With that in mind, I thought it would also be equally helpful to try and narrow down the other parts of Plec's cryptic statement. So who's in for a make-up and who's gunning for a break-up? There are a few clear possibilities.

Clearly, Stefan and Caroline don't fall under the "break-up" category (you can't break up if you've never been together). However, given the way Plec phrased this particular tweet — stating that these three events don't "necessarily" describe just one couple — leads me to believe that there's bound to be at least a bit of an overlap. Otherwise, why mention it at all? I would've just assumed each hint was describing a different TVD duo. Plus, having Stefan and Caroline make-up is what would eventually lead to a hook-up, so the two kind of go hand-in-hand anyway. And since no one else on this show is fighting (other than Damon and Alaric, who already seem to be patching things up, bro-style), Steroline seems like the best fit.

Granted, they're not really spending a ton of time together as it is due to the fact that one of them is currently taking up residence in 1994. (And you thought your long distance relationship was hard.) But when you take into account the many other spoilers Plec revealed, no other Mystic Falls couple makes as good of a candidate. For one thing, Plec says that "Alaric Saltzman falls in sweet sweet love" (with Jo?), while "Tyler Lockwood takes a stand on behalf of his girl," which I think we all can assume is Liv. So clearly these pairings seem to be on solid ground.

But then there's Bonnie, who will return, but be significantly changed. Maybe so much so that she no longer wants to be with Not-So-Little Gilbert? And then there's always this to consider…

Perhaps to get away from a certain ex-girlfriend? Either way, this relationship has pretty much run its course and I think we're all ready to see it come to a close. (Sorry, Jeremy, but I like Bonnie way better when she's single.)

So rest up, folks, because from the looks of things 2015 is going to be one very action-packed year. And to all you Steroline fans out there… I have a feeling your patience is finally about to pay off.

More like this
Kaley Cuoco Was Set Up With Her New Boyfriend Tom Pelphrey By Her Manager
By Hugh McIntyre and Jake Viswanath
These 'Bridgerton' Continuity Errors Are Almost As Infuriating As The 'GoT' Coffee Cup
By Jake Viswanath and Meguire Hennes
This House of the Dragon Character Will Create Another Scandal For Rhaenyra
By Kadin Burnett
Nicola Coughlan Shared A Lady Whistledown Excerpt From ‘Bridgerton’ Season 3
By Grace Wehniainen, Alyssa Lapid and Sam Ramsden
Get Even More From Bustle — Sign Up For The Newsletter