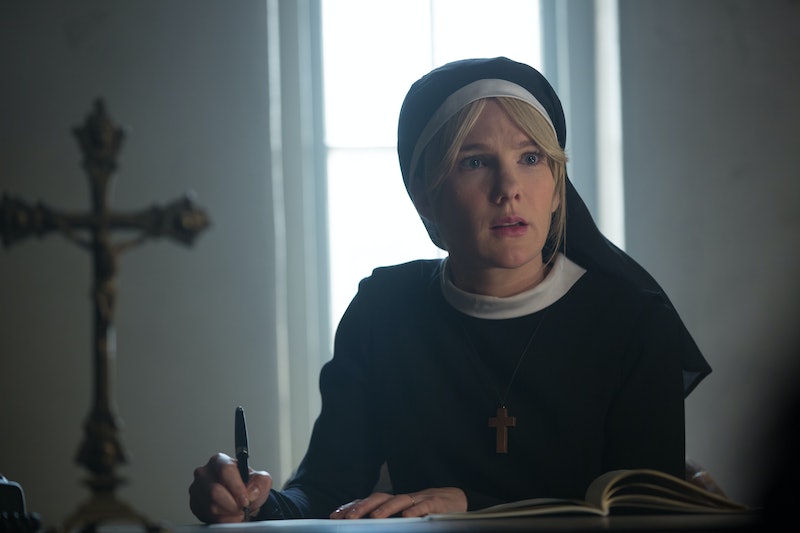 Viewers of FX's American Horror Story have been waiting with bated breath for fan-favorite character Sister Mary Eunice McKee to pop up on Freak Show ever since it was announced two months ago that actress Lily Rabe would be reprising her Asylum role in Season 4 of the horror anthology. But the actress has some other big projects coming up, so it makes you wonder, is Lily Rabe leaving AHS after Freak Show?

For now, we'll see Rabe on Season 4. And since Freak Show takes place before Asylum, that means we'll be seeing Sister Mary prior to her possession, which is what made her character so much fun. But even without the devil inside, having Rabe back on AHS is a boon for the show. She's been in every season since the original Murder House, and to not have her in Freak Show at all would have been a disappointment. Of course we all wish she was coming back for more than just a one-episode guest appearance, but it's better than nothing, right?

Since Season 4 deprived us of Rabe's prodigious talents for far too long, is there any chance we might see her return to the show full-time next year? We may not know exactly what Season 5 will be about yet (although fans have some theories), but surely it's not too soon to start lobbying for our favorite AHS mainstays to return. (I'm still hoping Connie Britton will find time away from Nashville to revisit the horror show sometime.) But there's a very specific reason Rabe is only in one episode of Freak Show, and that reason may also prevent her from rejoining the show as a series regular anytime soon.

That reason is a show called The Whispers , a thriller starring Rabe as Claire Bennigan, a detective investigating a string of violent crimes carried out by creepy children, who helps uncover the truth: aliens are controlling the susceptible minds of these children to carry out their invasion for them. The Whispers will debut as part of ABC's 2015 midseason lineup (it has no specific premiere date as of yet), and her commitment to filming that series is what kept Rabe from joining Fraulein Elsa's Cabinet of Curiosities... and is what will likely keep her away from AHS for good if it proves to be a success and gets renewed for more seasons. This doesn't rule out future surprise guest roles like Rabe's Freak Show appearance, but the days of Rabe being a major player on AHS are likely over for good.

Of course, if The Whispers were to wind up getting the axe, then it's possible Rabe could return to her old stomping grounds. But there's something about wishing for cancellation — and the subsequent job losses for everyone involved in the production — just to have one actress's time freed up that feels karmically dubious. Instead of praying for her new show's failure, we should hope for its success; a starring role for Rabe on a hit show on one of the Big Five networks would certainly be nothing to shake a stick at.

But even if The Whispers does well, it's hard not to feel a little bummed... especially since AHS isn't the only one of our pop culture obsessions to have lost Rabe to another commitment, either. The actress previously had to drop out of The Hunger Games: Mockingjay — Part 2, in which she was set to appear as District 2's Commander Lyme, because her role in Much Ado About Nothing at NYC's Shakespeare In The Park conflicted with filming. Game Of Thrones ' Gwendoline Christie took over the part, which is an awesome choice. But while I'm excited to see GoT's Brienne on the big screen, it's unfortunate that Christie's feature film breakout had to come at the expense of Rabe's.

More like this
How Ghosts Inspired Kesha’s New Music
By Jake Viswanath
At 14, Jurnee Smollett Was Taking Meetings With Missy Elliot & Lauryn Hill
By Chloe Foussianes
Shonda Rhimes' Net Worth Makes Her One Of The Wealthiest People In TV History
By Hugh McIntyre
How Much Are The 'Schitt’s Creek' Stars Worth?
By Hugh McIntyre
Get Even More From Bustle — Sign Up For The Newsletter