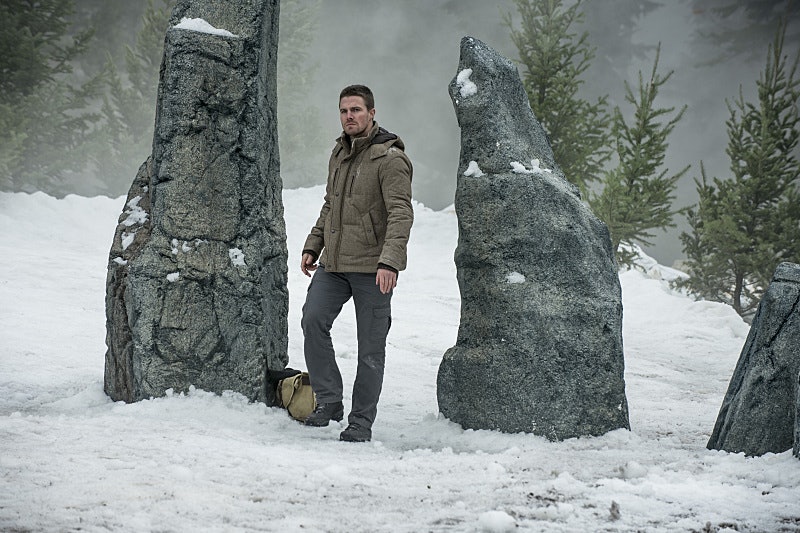 Oliver Queen can't be dead... right? TV shows love to pull stunts and give us incredible cliffhangers, but Arrow wouldn't outright kill off its main character midway through its third season, would it? I'm going to go with a hearty, "nah, probably not" for this one, even though it really appears that Oliver Queen is dead, I think we can bet against that. The Starling City vigilante isn't dead — he could be mostly dead, but not completely dead. With that being said, who approaches Oliver in the "Left Behind" Arrow promo?

The midseason finale, "The Climb," ends with Oliver being defeated by Ra's al Ghul. Then he's stabbed through the chest and pushed over the side of a cliff to really show us that he's been defeated. He falls for a bit and then ends up among the rocks and the snow as the episode ends. But if you've happened to catch the preview for the next episode, "Left Behind," there's someone who actually comes across Oliver — is it by accident, or is this person actually looking for him? We don't know, and we won't know until Arrow returns on Jan. 21. However, we can speculate as to who this person is, found at the end of the 20-second promo below.

Yeah, he's a bad guy and continues to be a thorn in Oliver's side for just about everything he's ever done. Because of that, he just might be the perfect person to come along and rescue the fallen Arrow. We know that the only reason Oliver even stood up to Ra's is because of the threats Merlyn made against him, all regarding Thea. All of this is kind of Merlyn's fault, so it'd be a nice gesture if he travels out in search of Oliver, knowing he'll be defeated, and rescue him. Maybe that could actually bridge the gap between these two.

Could that figure be Laurel? Considering we have little knowledge of what she's been up to for the last handful of episodes — aside from the fact that she is totally training with Ted to become a fighter, masked vigilante, etc. — she could be the one to save Oliver in a nice little role reversal. We know that Laurel's big introduction as the Black Canary is coming up, and Arrow could use Oliver's fall as the jumping off point for that.

Oliver was quite surprised to see Maseo hanging out with the League, which means that there's still way more to their story that we haven't seen yet. In flashbacks, we know that Tatsu has been taken (apparently) by China White. In the present, we know that Oliver and Maseo had to deal with some sort of "incident" that they're both being quite vague about. What is it, and is Tatsu dead? Could she be someone fighting against the League herself, and could Maseo be helping her?

Just because you've died on Arrow, it doesn't mean you're really dead. More than likely, whoever finds Oliver is taking him to the Lazarus Pit, which requires a very long explanation. But know that the Pit is strange, mysterious, and magical, and even though it might sound crazy, it would be completely believable if the ghost of Sara Lance came and took Oliver there. Or, the Ghost of Tommy. Or, the Ghost of Moira or Shado or literally anyone else who has died on the show.

Oliver is on the verge of death but — we're going to assume! — he comes back to life somehow, and he might not be able to explain it himself. The split-second look at the leg that approaches him doesn't reveal much. Honestly, I'm really pulling for Oliver to be saved by the Ghost of Black Canary Past.