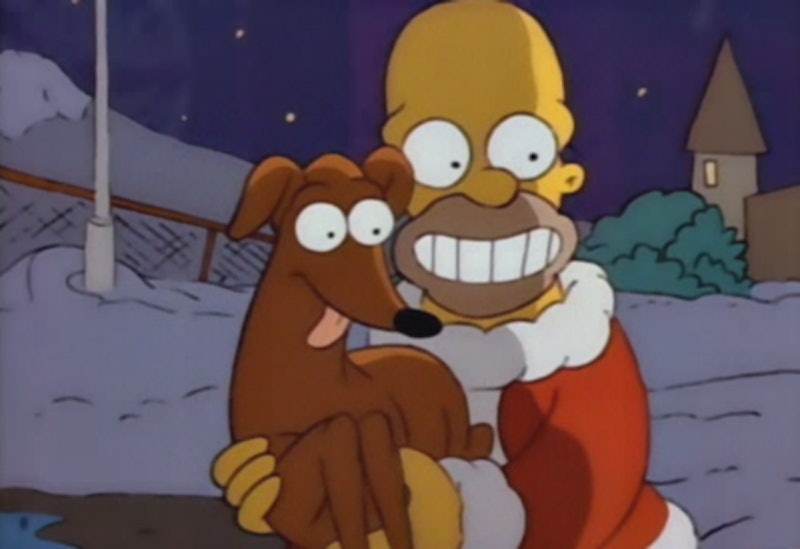 Every holiday season, my dad shows The Simpsons Christmas pilot "Simpsons Roasting on an Open Fire" to his students. Shoddily animated and weirdly stilted, it may seem wildly outdated now, and in fact the pilot (and subsequent series) is celebrating it's 25th anniversary on Wednesday. But no matter how many times I've watched the episode, or how antiquated the phrase "Don't have a cow man" is, it still remains a Christmas masterpiece. And the reason it's so incredible is because of Santa's Little Helper, the literal underdog of the series.

Let's revisit the episode itself. Bart, starting a long-standing holiday tradition, nearly ruins Christmas when he gets a tattoo, and the removal uses up the family's scrounged funds. Homer's Christmas bonus is revoked by the ever-generous Mr. Burns, so he's forced to take a side job as a mall Santa. On Christmas Eve he finds out the job pays barely anything and in a last ditch effort, Bart and him take to the race track to bet their money. Enter Santa's Little Helper, a last minute switch-in who Bart believes is the Christmas miracle television has led him to believe in.

Bitterly disappointed and flat broke, Homer and Bart look dejectedly for winning tickets in the parking lot, when Santa's Little Helper gets kicked out by his owner for losing again. Then, the most heart melting moment in television comes with this wide-eyed animated dog runs into Homer's arms. "He's a loser! He's pathetic! He's ... a Simpson," Homer relents. And when he brings the dog home, all other presents are forgotten, as the family falls in love with this silly little pup. Santa's Little Helper couldn't run a race to save his life, but he did save Christmas for the Simpsons.

Now, that's great and all, but you may think it's still a bold statement to give credit to a wordless, scrawny greyhound, the second of two Simpsons pets. First of all, Snowball II is kind of an asshole, let's be honest. And second of all, the introduction of Santa's Little Helper meant so much more for the series as a whole.

We forget, sometimes, that The Simpsons is really just the world's most successful spin-off, originally appearing in shorts on The Tracey Ullman Show. Those shorts show a sillier world, one-dimensional and ridden frosty chocolate milkshake. The "new" show had to offer a little more depth than that to stick around primetime television.

And over the years, it has. The Simpsons consistently offers so much more than your average cartoon, more than your average sitcom. Within it you have biting postmodern satire, you have a strong female role model via the wonderful Lisa, and you have absolutely hysterical songs (Monorail! Monorail! Monorail!"). You can credit that to good writing, of course, but nobody reads a think piece called, "The Simpsons Has Been Around For So Long Because of Good Writing."

But December 17, 1989 was a monumental day for two reasons. It was the day American became complete by embracing the Simpson family. But more than that, it was the day the Simpson family became complete by embracing Santa's Little Helper. Santa's Little Helper is the first indicator that the show was more than just another dysfunctional family. He's proof that the show has something much more important than that: it has a heart. And without that heart, I don't think the show would've lasted 25 years.

So thank you, Santa's Little Helper, for bringing that important emotive quality that made The Simpsons an American institution. You're truly a Christmas miracle.