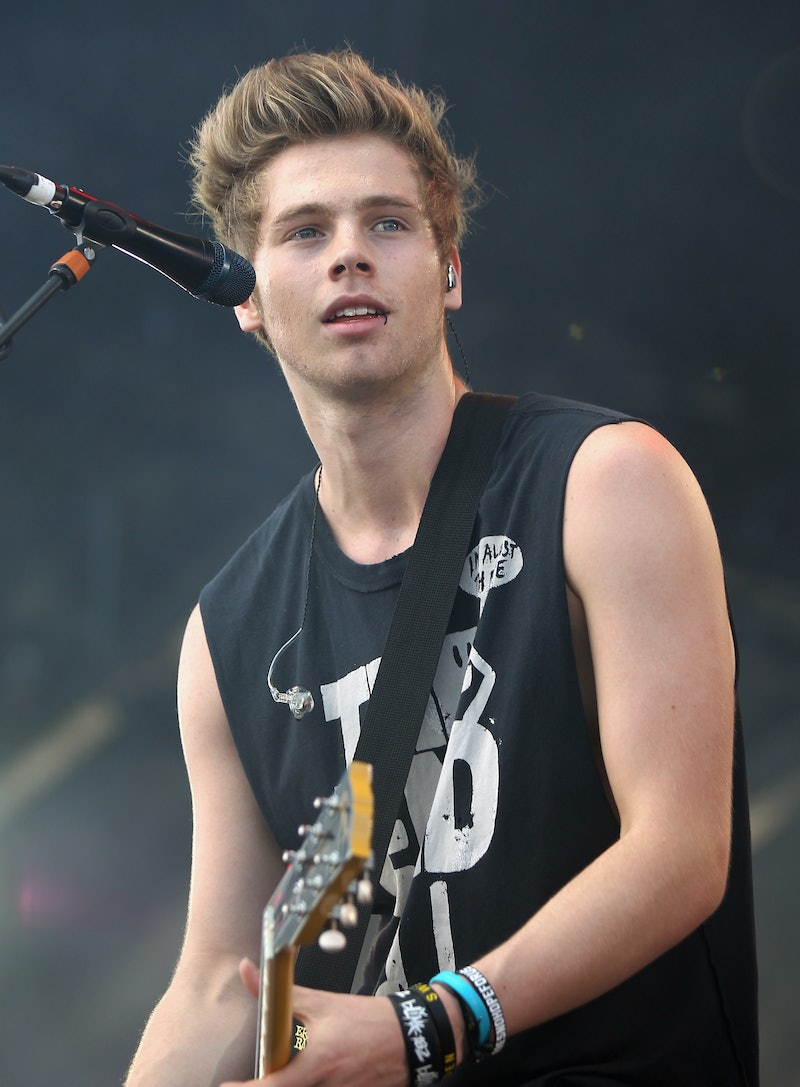 It's pretty obvious that Luke Hemmings is the leading man in the band 5 Seconds of Summer. He's the lead singer and guitarist, sure, but I have another way of justifying this: he has the most Twitter followers with a solid 4.85 million. Not too shabby. This must mean that Hemmings has swarms of fans lusting after him. Plus, he has been single for a little while now. So, if you're a fan, you might be wondering what Luke Hemmings looks for in a girlfriend. Well, I'm here to let you know.

But first, a bit of background. Hemmings split with his former girlfriend Aleisha McDonald in the summer of 2014, so now we are all left wondering what's next for him in the romance department. Sadly, this is unclear, but he seems to be very single these days. Seeing as you probably don't know him, this might be jumping the gun, but you may have a shot at dating him.

He's really not looking for anything too complicated. In fact, there is a very real possibility that you embody all of the qualities that Hemmings desires in a lady. No, I'm not kidding. You could be traveling on the tour bus with 5SOS before you know it. Do you have what it takes to nab Luke Hemmings? If you meet the following criteria, you have a shot.

You Are a Fan

Rejoice! If you are into 5SOS, you have a chance. Luke Hemmings has said, "Yes I’d date a fan. People talk about fans like they’re mystical creatures, but they’re just normal people.” Well, this is promising. In fact, it's almost a prerequisite to win over the singer. Hemmings would find it hard to date someone who was not a fan of his music. He admitted, “I’d be a bit upset, but I’d get over it.” Who isn't a 5SOS fan? All of their songs are just so catchy. I don't think the singer will have any issues finding available fans to date.

You Have a Great Sense of Humor

Laughter is the key to finding love with Luke. He told Seventeen magazine, "[I want] a girl with a good sense of humor who doesn't take herself seriously. Australians are naturally sarcastic. Witty jokes work well on me." If you can crack jokes with ease and spew out sarcasm like it's second nature, you're good to go.

He spends a lot of time with his 5SOS bandmates, so it makes sense that he would want to be with someone a little more ladylike. During an interview with the group, Hemmings joked, "I want someone that smells nicer than you guys!” I don't think that's really asking for much. Plus, I assume that most women smell better than a tour bus full of guys. Hopefully...

You Would Ask Him Out

Don't be intimidated by Luke Hemmings. Yes, he wants to date a fan of his music, but he does not want a woman who bows down to him. Hemmings loves a girl who is not afraid to make the first move. He confessed, "I’d very much prefer [to be asked out], because I’m not much good at it.” Aaaaawww. That's actually very endearing and adorable. Maybe he is single because none of you have asked him out? It's possible, right?

You Are a Little Weird

He is not looking for a girl who is perfectly poised and has said, "I like band tees and ripped jeans. [And she should be] a little bit strange.” If you are an oddball who can rock the denim and a t-shirt, you may be the one. It's nice to see that he does not have impossible standards to meet. He really is accessible. Minus the whole international, traveling musician thing.

You Are Ellen DeGeneres

This is the one requirement that most of you cannot meet. After all, there is only one Ellen DeGeneres in this world. Hemmings has confessed that DeGeneres is his celebrity crush. Well, this won't work out. Obviously, DeGeneres is already happily married to Portia de Rossi, so I am not sure that Hemmings could sing his way into her heart no matter how hard he tries. Maybe he would settle for a girl who looks like Ellen, dances like Ellen, and is funny like Ellen?

You Never Got with His Friends

Hemmings takes bro code very seriously. In an interview with his band mates, Calum Hood declared, "Dating your best friend’s ex is a no-no. I hate people like that. I could not hang around such a person.” Hemmings jumped in and agreed saying, "Yeah, that’s so disgusting!" So if you are trying to get with a member of 5SOS, choose wisely because you cannot go back on your decision.

Aside from being in a highly popular band, Luke Hemmings seems to be a pretty accessible guy. If you meet these seven requirements, you could be his next girlfriend. It's pretty unlikely, but a girl can dream.

More like this
Rhys Ifans Has A Good Reason For Keeping His Love Life On The DL
By Maxine Harrison
Gigi Hadid’s Dad Shared What He Knows About Those Leonardo DiCaprio Rumors
By Brad Witter
Who Is Nick Cannon Dating & How Many Kids Does He Have?
By Jordyn Tilchen and Radhika Menon
Cynthia Addai-Robinson’s Husband Is The Hype Partner We All Need
By Darshita Goyal
Get Even More From Bustle — Sign Up For The Newsletter