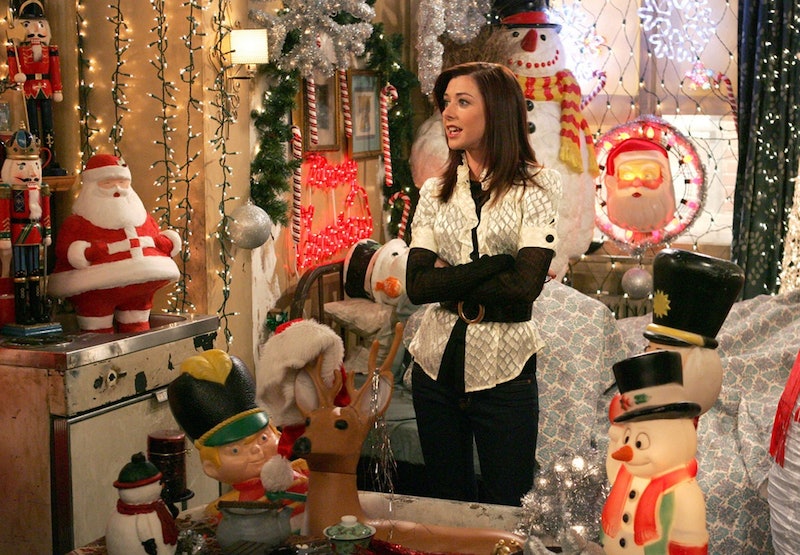 It is the right and privilege of any American sitcom to up the ante on the schmaltz come time for the holiday season, churning out what we all know and love to be the “Christmas episode.” Granted, not all comedy series’ yuletide endeavors are sappy and sentimental — quite often, in fact, a show will opt to delve even further into the black pit of its cynicism as a counterbalance to December’s saccharine festivities. We’ll take it either way. Just as long as it’s funny.

Naturally, some programs are better than others at pulling off Christmas episodes. Certain sitcoms have made the ritual an annual tradition, ensnaring their characters in frazzled gift exchanges, worrisome eggnog binges, or the odd quest to save Santa year after year. But among these many that return to the plate for new holiday adventures each season, we wonder which ranks as the strongest purveyor of Christmas episodes.

We’ve taken a look at some of the top contenders from the past 20 years — series that have turned over the sorts of holiday entries you always hope to catch during your winter break channel surfing. Of course, even the greats aren’t exempt from a few clunkers, too. So which of the following shows averages out to the best player in the Christmas episode game?

How many Christmas episodes? Eight.

How many good Christmas episodes? As with many series, not all of Friends’ Christmas episodes are altogether “Christmasy,” losing it points in this competition. The most memorable of Friends’ holiday festivities come in the form of Phoebe’s lyrically tepid carol in “The One with the Girl from Poughkeepsie,” and — of course — Ross’ stab at Jewish pride: the Holiday Armadillo.

All in all? Friends already has stake in a holiday: Thanksgiving. Christmas is hardly its claim to fame.

How many Christmas episodes? Six.

How many good Christmas episodes? I dare you to find a single episode of Seinfeld that you wouldn’t qualify as “good.” That said, as with Friends, most of Seinfeld’s Christmas eps made only passing mention of the holiday. The chief exception: “The Strike,” which introduced the world to Festivus.

All in all? Although it might rank as the show’s sole “Christmas success,” Festivus went a long way. Enough to lift Seinfeld above the Central Perk 6, but not much further than that.

How I Met Your Mother

How many Christmas episodes? Six.

All in all? Although How I Met Your Mother had fewer Christmas highs than Friends did, the entries average out to a more festive embrace of the holiday overall. Ted and Lily’s delicately censored holiday fight (“How Lily Stole Christmas”), Marshall’s December homesickness (“Little Minnesota”), and Robin’s immaculately decorated apartment (“Symphony of Illumination”) all make for relatively, if not too impressively, decent Christmas cheer.

How many Christmas episodes? Fourteen, plus a Christmas-themed episode that aired, curiously, in April, and two holiday-themed shorts.

How many good Christmas episodes? Now here’s a show that celebrates Christmas with vigor at every outing. Among the most iconic of the lot include The Simpsons’ pilot (“Simpsons Roasting on an Open Fire”), Bart’s bout with shoplifting (“Marge Be Not Proud”), and Lisa’s conversion to Buddhism (“She of Little Faith”).

All in all? The vast majority of The Simpsons’ Christmas eps are forgettable (though this has more to do with the well-documented decline in quality and popularity that hit the show around its 12th or 13th season). But the good ones are that special Springfieldian combination of caustic and sweet — exactly what you want come December 25.

How many Christmas episodes? Four.

How many good Christmas episodes? One good one, one great one (that being “Abed’s Uncontrollable Christmas”).

All in all? It might seem odd to rest a show’s entire Christmas reputation on a single exemplary episode, but “Abed’s Uncontrollable Christmas” is such a strong entry that it sweeps almost everything else on this list. The stop-motion animated half-hour is more vehemently about Christmas than any aforementioned episode, epitomizing Community’s golden era strength for using television tropes to say something about society and the human condition.

How many Christmas episodes? Five.

How many good Christmas episodes? “Ludachristmas,” “Christmas Special,” and “Secret Santa” are all terrific (and each one festively inclined). “Christmas Attack Zone” is… okay. And I can’t be bothered to remember any episode that centered around the travesty that is latter day Jenna (“My Whole Life Is Thunder”).

All in all? 30 Rock’s three splendid (and one altogether decent) outings may not be as innovative or thematically rich as “Abed’s Uncontrollable Christmas,” but they are each colossally, rewatchably funny.

How many Christmas episodes? Seven.

How many good Christmas episodes? Seven. Even during The Office’s weaker seasons, the show always managed to strike up ingenuity when it came to throwing its Dunder Mifflin Christmas party. Of course, some stand out above others: “A Benihana Christmas” and “Secret Santa” are two personal favorites.

All in all? The unabashed, undeniable winner of the Christmas episode game, perhaps of all time. Bravo, Michael Scott.