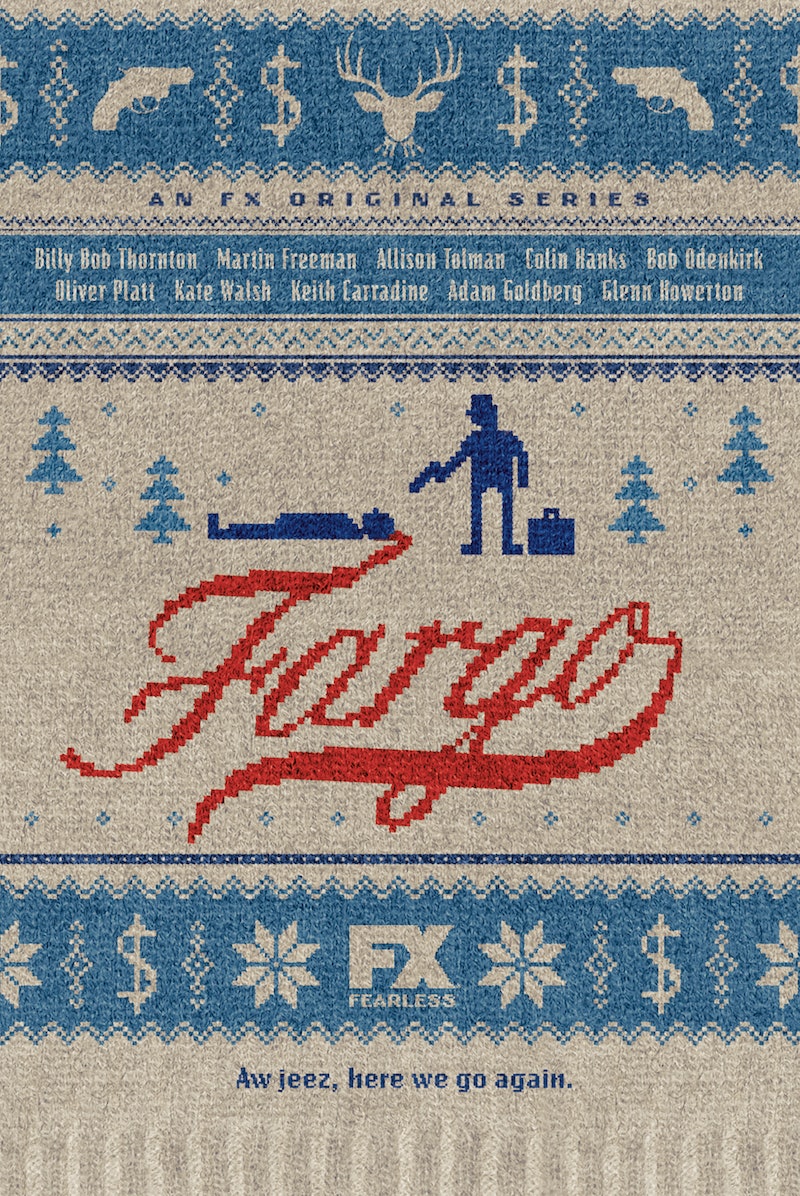 I recently took it upon myself to rank all 85 pilots that premiered throughout 2014, and FX's Coen Brothers-esque crime anthology Fargo nabbed the #2 spot — just behind Amazon's quietly affecting Transparent, but above HBO's own much-lauded crime anthology, True Detective. So to say that I'm stoked for Fargo Season 2 would be an understatement. Creator and showrunner Noah Hawley did such a spectacular job with the freshman season. Remember when news first broke that somebody was doing a television adaptation of the Coens' most beloved film, and everyone was outraged because nobody could imagine how it could be any good? I'd say Hawley put those fears to rest, wouldn't you?

Season 1 focused on Deputy Molly Solverson (Allison Tolman) and Officer Gus Grimly (Colin Hanks) teaming up to investigate a series of shockingly violent crimes spanning from Duluth to Bemidji, perpetrated by malevolent hit man Lorne Malvo (Billy Bob Thornton) and amoral insurance salesman Lester Nygaard (Martin Freeman). It featured several memorable guest appearances from the likes of Key & Peele, Breaking Bad's Bob Odenkirk, Private Practice's Kate Walsh, and It's Always Sunny In Philadelphia's Glenn Howerton. But, Fargo being an anthology show, you can expect all that to vanish in Season 2 like the Minnesotan snows in... July, since it's basically winter there for 11 months out of every year.

Here's everything we know about the second season of Fargo :

It Will Still Be 10 Episodes

Occasionally, when a new show with a limited number of episodes is successful and picked up for a second season, it might be granted an expanded episode order. Think of HBO's Looking, which went from 8 to 10, or FOX's Sleepy Hollow up to 18 from Season 1's 13. No such luck with Fargo, I fear. Season 2 will be as brief as Season 1 — although I expect that has more to say about Hawley's artistic integrity than FX's faith in the show.

You read that right. We still have almost a full year to go until we'll see a new episode of Fargo. Although the show debuted on Apr. 15 of this year, it won't be keeping a spring premiere date for Season 2. This is likely due to the unusual length of time it took for FX to announce the show's renewal. While HBO barely waited 24 hours after Game Of Thrones's Season 4 premiere to announce that they had renewed the show for Seasons 5 AND 6, FX took almost a month after Fargo had aired its season finale before making the renewal official. As Hawley explained it, "My experience with FX is they’re very proud of the quality of the work, and their biggest concern is if we were to do it again, could we make it as good or better."

It Will Take Place in Sioux Falls, South Dakota, in 1979

For Season 2, the show is traveling backwards in time to 1979, 27 years before the events of Season 1, which took place in 2006 — but only eight years before the events of the film, which took place in 1987. Additionally, it will be expanding from the primarily Minnesotan locations of Season 1 to include South Dakota — specifically, the show will take place in the towns of Sioux Falls, S.D., and Luverne, M.N., located just across the state line from each other. You know what else is in South Dakota? Mount Rushmore, our country's most singularly odd monument. Could we be seeing a North-By-Northwest-esque literal cliffhanger of a finale?

As the clock has been rewound 27 years, none of Season 1's actors will be popping up again in Season 2. But there is one character who is making the transition: Lou Solverson, the diner owner and father of Deputy Molly, the older version of whom was played by Keith Carradine. If you remember, before he got into the restaurant business, Lou was himself a state cop who got embroiled in a particularly nasty case shortly after arriving home from fighting in the Vietnam War. Supposedly we'll also find out what happened to Molly's absent mother. (Spoiler alert: probably nothing good.)

It Will Star Kirsten Dunst

While an actor for young Lou has yet to be found, FX has announced some exciting casting news. Kirsten Dunst has joined the cast in her first-ever series regular role on television. (Her previously longest-running part on TV was as teenage prostitute Charlie Chiemingo in six episodes of ER's third season.) Dunst will reportedly be playing Peggy Blomquist, a beautician "trying to figure out who she really is and what she really wants as she struggles with traditional societal expectations." Dunst should feel right at home in a role and setting not unlike her part in the 1999 cult classic comedy Drop Dead Gorgeous , where she starred alongside Brittany Murphy, Amy Adams, Denise Richards, Kirstie Alley, Allison Janney, and Ellen Barkin as a participant in a homicidal beauty pageant.

Of course, Dunst isn't the only person who's signed on to Season 2. Jesse Plemons (Friday Night Lights, Breaking Bad) will play her husband, Ed. Jeffrey Donovan (Burn Notice) has been cast as Dodd, although we don't know anything about his character yet, and an offer has been made to Nick Offerman, aka national treasure Ron Swanson — although he has yet to officially join the cast.

Hawley is Keeping Everything Connected

Although Fargo is an anthology show, each new season will not be 100 percent distinct from all the others, unlike True Detective (or American Horror Story until Ryan Murphy decided this year that, just kidding, all of his seasons are connected after all). Obviously, Seasons 1 and 2 of Fargo will be specifically linked by the character of Lou Solverson... but the entire Fargo franchise, including the film, is also connected in a more general sense. "I like the idea that somewhere out there is a big, leather-bound book that's the history of true crime in the Midwest," explains the showrunner in an interview with Zap2It. "The movie was Chapter 4, Season 1 was Chapter 9 and this is Chapter 2. You can turn the pages of this book, and you just find this collection of stories. But I like the idea that these things are connected somehow, whether it's linearly or literally or thematically. That's what we play around with."

It's Inspired By a Different Set of Coen Brothers' Films

Obviously, most of Season 2's inspiration will still stem from the film that shares its title, but that's not the only Coen Bros. movie Hawley is looking at for ideas. For Season 1, the showrunner also drew inspiration from 2007's No Country For Old Men and 2009's A Serious Man. He has stated to EW that with Season 2, he's looking more towards the Coens' earlier works, like 1990's Miller's Crossing and 2001's The Man Who Wasn't There. So what does that mean for the show? "The scope of the story-telling this season is a lot bigger, it has more of an epic feel to it,” Hawley said. "The earlier time period and even more rural setting gives the show an almost Western-like quality."

You Can Read Part of The Script Now

In that same interview with EW, Hawley also provided the publication with a page from the script of the Season 2 premiere, which takes place about halfway through the episode. The scene features Dunst's character examining a bloodstain on her shirt. How did it get there? Why doesn't she seem more concerned about it? It obviously has something to do with how Peggy and her husband "find themselves caught in an escalating war between a local crime gang and a major Mob syndicate," but how does a small town beautician get embroiled in such a nasty mess? Sadly, we'll have to wait until next fall to find out.

More like this
'Line Of Duty’s Jed Mercurio Has A New Crime Drama In The Works
By El Hunt
'Elite' Season 6 Is Arriving Sooner Than You Think
By Gretchen Smail and Grace Wehniainen
The ‘You’ Season 4 First Look Shows Joe’s New Identity And Potential Victims
By Bustle Editors
The ‘Emily In Paris’ Season 3 Release Date Is Here, Plus The First Footage
By Bustle Staff
Get Even More From Bustle — Sign Up For The Newsletter