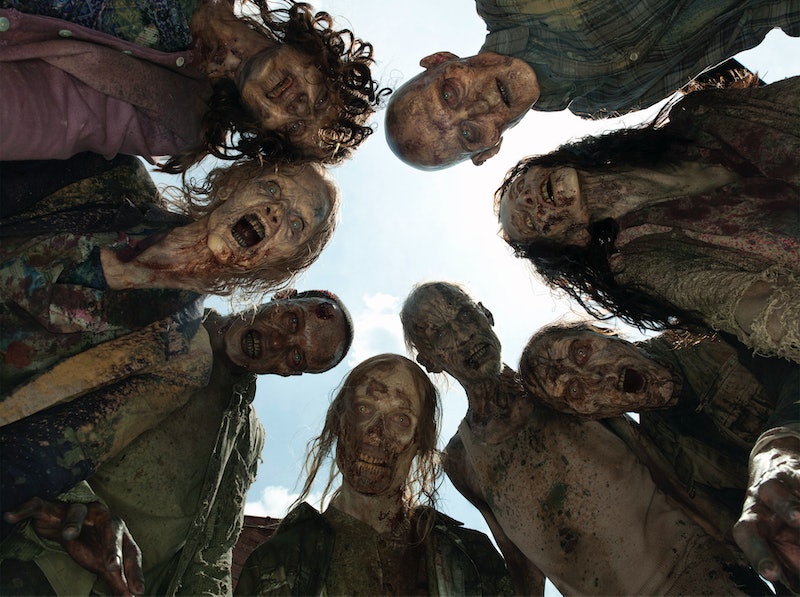 Through five years of wandering the post-apocalyptic landscape of the American southeast, fans of AMC's The Walking Dead have encountered a huge cast of characters populated by people of all shapes and sizes from all walks of life: men and women, young and old, good and evil, living and dead. But there is one specific subset of our country that has been under-represented... until now: the LGBT population. Last season, we met Tara and her girlfriend Alisha — although Alisha was shot dead by little Lizzie during the Governor's attack on the prison before we really got to know her, and nobody would argue that Tara is anything more than an expendable supporting player at this point. So it's encouraging to hear that TWD is going to introduce its first gay male character later this season: Aaron.

It's fortunate timing since, in practically the same breath, Robert Kirkman debunked one of the show's most popular and longest-running theories: that Daryl Dixon might be gay. The sexuality of this fan-favorite character has long been up in the air; legions of fans have shipped him alternately with Carol and Beth, but the crossbow-wielding badass hasn't made a move on either of them in five seasons. And since he's an original creation for the show, there's no source material to look to for answers about his past.

The revelation that Daryl is, in fact, just another cisgender white male was especially disappointing considering the fact that his portrayer, Norman Reedus, has openly admitted that the original plan was for his character to be gay. "I remember Frank Darabont, after the first season we were at a party in L.A., He said, 'I've got an idea for Daryl. He's gay. Would you be interested in that?'" recalls Reedus during an interview with GQ . "I was like, 'Let me hear you out.' He said, 'Well, he's prison gay — like, you'll catch him looking at a member of the same sex, but if you mention it to him, he'll just stab you and be like what the fuck? — he will never admit it.' I was like, 'That'll blow minds—let's do that.' And he said, 'I knew I hired you for a reason.'"

Darabont (The Shawshank Redemption) is TWD's creator and served as showrunner for Season 1 and part of Season 2 before he was fired by AMC over budgetary concerns. He was replaced by Glen Mazzara through the end of Season 3, who was himself replaced by Scott M. Gimple, the show's current head honcho. It appears that plans changed somewhere throughout those multiple transitions, and Daryl lost potentially his most interesting trait. So the fact that the Gimple is choosing now to introduce Aaron seems more like a mea culpa than anything — but I'll take it anyway, since Aaron is an awesome character.

Who is this Aaron I speak of? For those unfamiliar with Kirkman's graphic novel, the character is a resident of a place called the Alexandria Safe-Zone who, along with his partner Eric, works to recruit new members for their community. He crosses paths with Rick's group and, after some hemming and hawing, they decide to follow him to Alexandria, where they still remain in the pages of the source material as productive members of the makeshift society. Aaron has grown close to Rick in particular, with the recruiter and the leader remaining steadfast allies through good times and bad.

Fans have been anticipating Aaron's arrival for a while now, since the Alexandria Safe-Zone is the next major plot point in the comics after the prison and is, in fact, where the group has been for the past 10 volumes — almost a full half of the graphic novel's run. But how will Rick & Co. get to Alexandria (six miles outside of Washington, D.C.), since the last time we saw them they were in downton Atlanta? Half of the group was headed to D.C. when they thought Eugene was in possession of a cure, but they just turned around when he was revealed to be a fraud. So what would possibly drive them back in that direction?

Perhaps, reeling from the loss of Beth, the group decides that heading to D.C. is still the best course of action, cure or no cure. After all, if any infrastructure survived, it would likely be in the home of our nation's government. It's not like anyone in the group has a better plan right now, anyway! Alternately, perhaps the writers will simply move Alexandria farther south for the purposes of the show. There's no reason the Safe-Zone has to be in Virginia; there are 20 cities in the United States called Alexandria, two of which are in Alabama and Tennessee — states that border directly on Georgia. Staying in the south would certainly save on production costs, as they wouldn't have to move the entire shoot to a markedly different-looking location.

Wherever Alexandria is and however the group gets there, I'm just excited to meet Aaron and Eric. After all, zombies are equal-opportunity killers — they certainly don't care whether their victims are gay, straight, transgender, whatever. The Walking Dead shouldn't, either.

More like this
The 50 Most Powerful Characters In The Marvel Universe, Ranked
By Johnny Brayson and Nola Pfau
Everything To Know About The Long-Awaited ‘Community’ Movie
By Stephanie Topacio Long
'Interview With The Vampire's Lestat Is Sam Reid’s Biggest Role Yet
By Kadin Burnett
Aemond Targaryen's Fate On 'House Of The Dragon' Is Full Of Revenge In The Book
By Grace Wehniainen
Get Even More From Bustle — Sign Up For The Newsletter