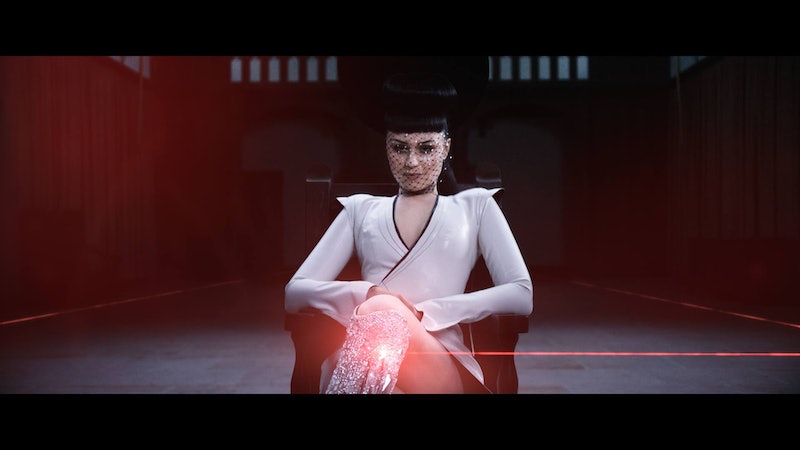 There are pop stars, and then there are pop stars, and then there's pop star Viktoria Modesta. Poised to take the world by storm with her recently-debuted video, “Prototype,” she’s becoming an important force in music and pop culture. And it’s not just for her modeling, or for her heart-pumping tunes; Modesta is an amputee. Or more accurately, she’s bionic: Her website describes her as “an independent multimedia performance artist, bionic girl, and DJ whose sole mission is to promote individualism and futuristic image through art.” Awesome? Awesome. She's definitely one to keep an eye on — you're not going to want to miss her.

According to her official bio, Modesta was born in the USSR in 1987. She suffered leg damage at birth, resulting in her spending her childhood in and out of hospitals; all the while, though, she studied music — principally piano and voice — starting at the age of six. When Modesta was 12, she and her parents moved to London, and by the age of 15, she had begun modeling. In 2007, after a lifetime of poor health and operations, the then-20-year-old made the decision to undergo a below-the-knee amputation on her left leg. Her goal was to improve her mobility and keep her healthier in the future. Since then, she has continued to model, as well as branch out further into music and DJing. She released her first EP in 2010; her latest video, “Prototype,” aired in the UK this past Sunday during The X Factor’s season finale as a part of ITV Channel 4’s ongoing “Born Risky” campaign.

“Born Risky” aims to normalize differences and offer a platform for programming and performers who might otherwise find themselves shut out of the entertainment world. Said Chris Bovil of Channel 4’s creative agency, 4Creative, to Creative Review, “Pop stars these days are painfully dull and manufactured. [Modesta] is the perfect partner for Born Risky and Channel 4 as she embodies our governmental remit of championing alternative voices and establishing new talent.” Modesta herself commented that the video helped her “express some of her more extreme ideas and continue in her fight against being categorized”; said the singer, “For a long time, pop culture closed its doors on me as an amputee and alternative artist. I think people have always found it hard to know what to think or feel about an amputee who wasn’t trying to be an Olympian.” According to the Daily Mail, she continued, “I have never felt comfortable thinking of myself as disabled, and this has inspired me to actively challenge old-fashioned views and create a platform in mainstream pop culture, with other artists, where I have always known I belonged.”

The Daily Mail describes “Prototype” as “Lady Gaga-style,” and they’re not wrong. Like Gaga’s videos tend to have, Modesta’s is futuristic in appearance, with avant-garde costumes and wacky headgear. There’s a lot of interesting stuff going on in it, though; although the music itself is also comparable to Gaga’s, I think the video as a whole reads as more complex. Although it looks like sci-fi, it’s also highly autobiographical — it's not just weird for weird's sake, which I've felt Lady Gaga has increasingly been doing over time.

Modesta also works with the Alternative Limb Project. A London-based service, it provides amputees with “unique prosthetics to blend in with the body or stand out as a… piece of art, reflecting the wearer’s imagination, personality, and interests.” Indeed, two of the limbs used in “Prototype” — one that lights up, the other a shiny metal spike — were designed by Alternative Limb Project director Sophie de Oliveira Barata.