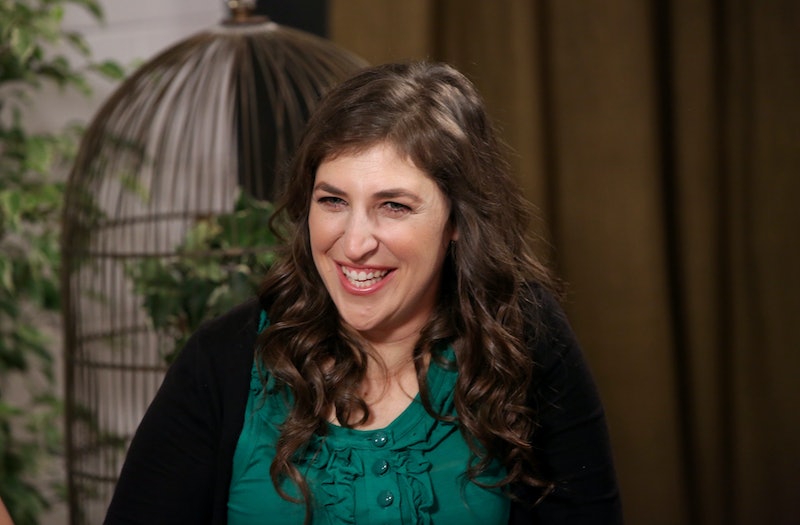 It's the holiday season — in real life, and more specifically, on social media for celebrities. Sometimes it seems like everyone is posting Christmas photos on Instagram and messages on Twitter, chock full of Christmas trees, gingerbread houses, and empty stockings waiting to be filled with toys. But Christmas isn't the only holiday that the stars are getting in the spirit of this season. There is also a group of Jewish celebrities using social media to get into the holiday spirit for Hanukkah. And they're definitely worth watching this season to get in the mood for spending time with family, indulging in some delicious latkes, and lighting the menorah.

Some post cheerful holiday greetings to fellow members of their faith, like Kat Dennings' "Happy Hanukkah" message with a star emoji, and others post more humorous messages, like Zach Braff's encouragement to "light that menorah hard." And some stars, like Mayim Bialik, go all out on social media — posting messages to Israeli fans, YouTube videos of songs, posts on her blog about explaining the difference between Christmas and Hanukkah to her kids, and even an Instagram photo of a troll doll with blue hair and a Star of David shirt. It'll be exciting to see what these stars post in the coming days.

Calling it now — The Big Bang Theory actress will be the queen of social media Hanukkah posts this year. Not only has she been mindful in wishing Israel and the East Coast a Happy Hanukkah before the holiday even started in LA, she has also posted think-pieces on how to explain the difference between Christmas and Hanukkah to children and also how to get by if you're a non-Jewish person at a Hanukkah party. She's also let her fans in on her own celebration. She's posted a photo lighting the menorah while on set for TBBT, and also posted the gem seen below.

Who could resist a troll doll in Hanukkah enthusiast attire?

The Scrubs funny man is chock full of jokes to tell this holiday season, as evidenced below by some of the tweets he's posted so far. It'll be fun to see what other laughs he'll get.

As Andy Cohen retweeted on his Twitter page, he was named an honorary shamash (or "helper candle") this year by Yahoo! to recap what makes the holiday so special. Stay tuned!