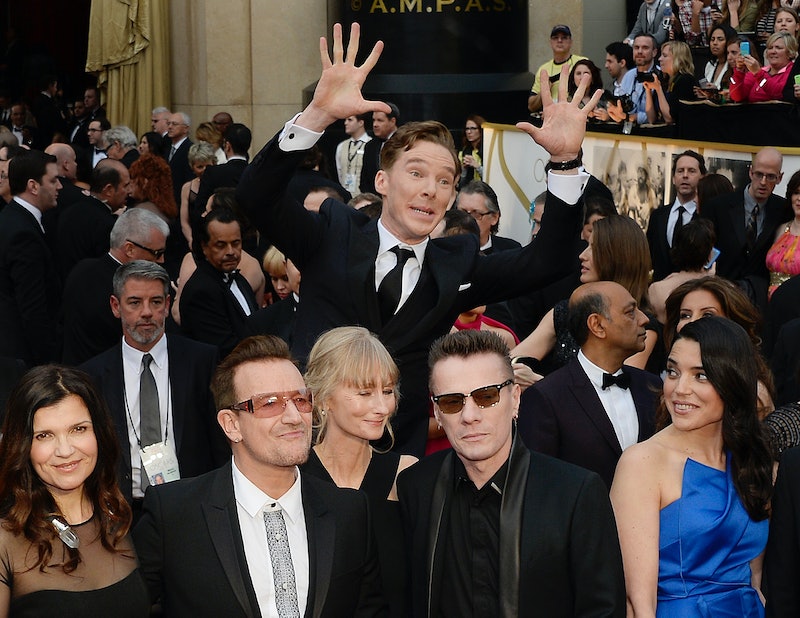 Sometimes it's hard to find two items that go well together. For example, I'd like to thank the person who discovered peanut butter and jelly sandwiches, because without them I wouldn't get to experience the delightfulness that is PB&J pretty much every day for lunch (yes, I still take pride in the fact that I eat PB&J's like a 12 year-old — don't hate). Two other things that complement one another are Benedict Cumberbatch and photobombing. Similar to his role as the title character on Sherlock and his acting in many movies like The Imitation Game, Cumberbatch is the master at photobombing.

You're probably thinking, "I already know this." First, I'm so glad that you do. Second, does it ever get old talking about Cumberbatch and his photobombing ways? No, it does not. So let's celebrate the rock star that is Cumberbatch and his photobombing talent. For those unaware, photobombing is when someone jumps in a photo and ruins it unexpectedly. Actually, it should probably officially be renamed "Cumberbatching" or "Cumberbombing." I have the utmost confidence that it will happen one day.

Anyways, back to celebrating these two great things that go together like Cumberbatch and Hiddleston being BFFs. Here are some of Cumberbatch's best photobombs, including both real and fake ones. Let me say you're welcome in advance — you're welcome!

That Time He Made U2 Look Good

This will forever be Cumberbatch's most famous photobomb. Does it really need an explanation?

When He Took Advantage of Ellen's Oscar Pictures

That Time He Looked Fine Doing It

No one wears a bow tie while photobombing like Cumberbatch.

When He Stole Michael Fassbender's Spotlight

Sorry, Michael, but Benedict is here.

That Time He Overshadowed Jane Austen

When He & His Bestie Loki Had Tons of Fun

These two have the best friendship.

That Time He Tried to Comb Watson's 'Stache

What a good friend Sherlock is to Watson — and his mustache.

When He Thought He Was the Fifth Beatle

The amazing photobombs go on forever. Thank you, Benedict. Thank you.

More like this
Chris Evans Had The Best Reaction To Seeing Ana de Armas As Marilyn Monroe
By Radhika Menon
At 14, Jurnee Smollett Was Taking Meetings With Missy Elliot & Lauryn Hill
By Chloe Foussianes
Lindsay Lohan & Jonathan Bennett Celebrated Mean Girls Day Very Differently
By Jake Viswanath
Alan Rickman's Diary Reveals Why He Considered Leaving 'Harry Potter'
By Darshita Goyal
Get Even More From Bustle — Sign Up For The Newsletter