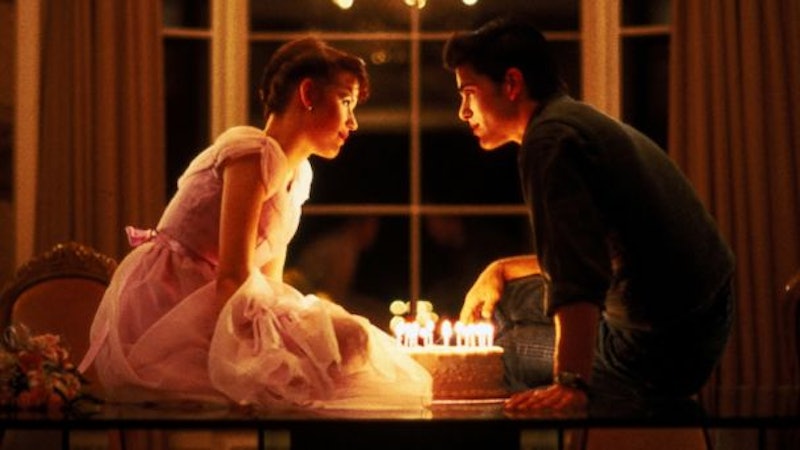 In what may be a controversial announcement, I maintain the belief Sixteen Candles is the best John Hughes film. Maybe because I've traditionally have horrific birthday stories my personal favorite being when my boyfriend broke up with me via email on my 21st. What can I say, things have gotten a little crueler in the Internet era, and there's no doubt that the film would've been very different if it was written in the age of smartphones, social media and Skrillex.

Which makes you wonder, how WOULD Samantha Baker fair if Sixteen Candles was set in 2014? In a world where embarrassing foibles are captured and shared across the world, there's no doubt Sam's birthday would go from uncomfortably bad to a full-blown nightmare. The school dance would go from a puffy-sleeved awkward-a-thin to 15-year-olds twerking in bodycon minidresses. And this is all, of course, if you could even justify the plot in a world where our Google Calendar badgers us into remembering every birthday.

Allow me to fast forward the film 30 years and fill you in on how a 2014 version of Sixteen Candles would fall flat.

The entire premise of the film is implausible enough in 1984, but there is NO WAY anyone would forget her birthday in the age of social media. Every day of my life, Facebook decides to notify me that like, the one girl who called me a witch every day in 7th grade is turning 24. Cool. So rest assured, everyone in Sam's ridiculously big family would be well-informed about her Sweet 16. Grandma Helen would write a full-length novel on a completely unrelated status to the tune of "To Our Lovely, Granddaughter, We Are So Proud Of You And Everything You Do. You Are Filling Out Beautifully. Love, Grandma Helen and Grandpa Fred."

Sam and Randy's Teenage Banter Would Be Done Entirely Through Text

The age of note-passing died sometime around my sophomore year of high school (although I have a shoebox of letters that would contest that). Likewise, nobody uses the phone to call anyone anymore, not in a world where you can order Chipotle online. So they're discussion of losing theoretical v-cards would done entirely through emojis. Sadly for Sam, Jake Ryan finds her lost phone, and emoji is a language he understands fluently. I mean, "Pointer finger, OK gesture, question mark" and "brown-haired boy, sparkly heart" is SO easy to translate.

Also Randy's Name Would Not Be Randy

*I have no idea what, I am an elderly person.

It would start small, blossoming on a handful of Instagram accounts. Then the Instagram accounts linked to Facebook spread the underoos further. Then, of course, the parody Twitter account, "Sam Baker's Underwear" would take off. Then 4chan would take care of the memes and sexist commentary. Tumblr feminists would respond with a "Justice For Sam Baker" campaign. And one day, suddenly, Emma Stone will have a nip slip or something and this whole thing would be forgotten about entirely.

This hilarious fail is a great scene in the movie, but these days no teenager with an iPhone Six would go without capitalizing on the moment 110 percent. This of course means four good selfies, and 76 unflattering ones. The golden four will be put into pic stitch and rack up Instagram likes left and right. Things would be good for our dear nerd, that is until he gets arrested for driving without a license. BE CAREFUL WHAT YOU SHARE ONLINE, KIDDIES

Like Yunioshi in Breakfast at Tiffany's, Long Duk Dong is one of those side-eye worthy, casually racist Asian stereotypes that smudge an otherwise flawless movie. At some point someone would cut that character from the script after acknowledging it would cause a media shitstorm.

Oh my God. That scene is so iconic, and I get so emotional every time I see it because I can't even fathom how Sam must feel. Like, literally, I can't fathom it. That's because unless there's a camera involved, the Romantic Grand Gestures we've been raised on DO NOT EXIST. Don't let those elaborate YouTube proposal videos fool you, they're just a different strain on the same unrealistic expectation. In this case, Jake Ryan's seemingly spontaneous Prince Charming appearance at the church will be entirely premeditated. It'll be posted on YouTube under the name "Guy Surprises Secret Crush With a Romantic Birthday Party." It'll go viral, not because of the romantic overtures, but because the titular 16 candle cake would have knocked over while they were kissing. The house sets on fire. It burns to the ground. And the last thing you see on the video is Samantha's parents scolding her for being alone in the house with a guy who's CLEARLY in his mid-thirties. High school senior, my ass.