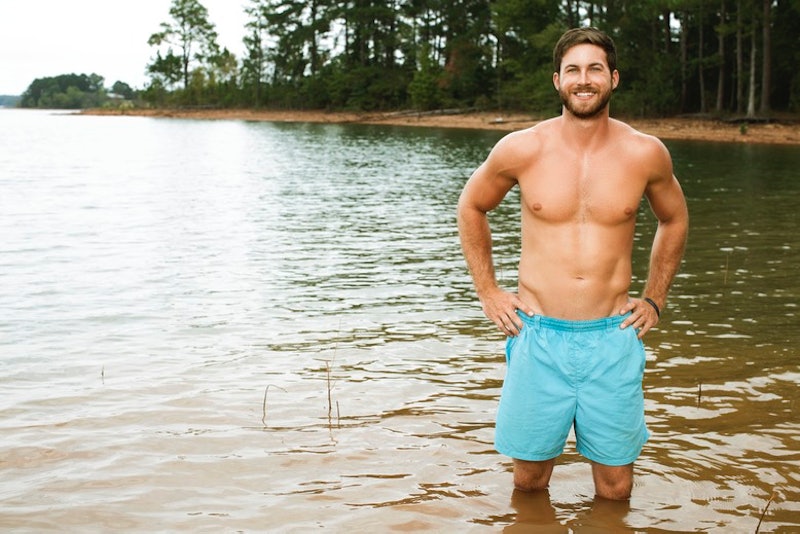 When I first heard about a show called Redneck Island, I was certain this was a new phenomenon. But to my surprise, this a show that is already on its fourth season, so it seems like the viewers are really loving it, only further proving that there certainly is something for everyone on television. The show is kind of what you think it sounds like — a "redneck" version of Survivor — where 24 people live in an undisclosed location to compete in various challenges for a chance to win $100,000. And with a nice pot of money like that, an interesting group of people is bound to come out of the woodwork. I recently took a look into some of the cast, and because I am a sucker for cute, Bradley Cooper lookalike, Riley Green caught my eye. So, who exactly is Riley Green from Redneck Island? It's nothing a little Internet research can't figure out!

I was certainly a little disheartened when the hottest dude on the cast labeled himself as a "career drinker" in his biography on CMT's page for Redneck Island, but really, what did I expect? We all know that reality producers are looking for the most drama on a television show, and pretty people that drink a lot will often deliver the goods. We've all watched The Real World/Road Rules Challenge, we know what happens. Actually, this entire bio doesn't really paint him in a good light, but Green assures that that is only a small sacrifice for the better of his career. He told The Anniston Star, his hometown paper in Alabama how felt about the bio.

The bio sort of upset my mom. I mean, she’s not a child; she had an idea about it when we went into it. Matter of fact, when we looked at the contract...the thing that stood out to both of us was "can’t portray in a false light."

OK, so the good thing is that he seems self aware, but what is this career he is talking about? Well, as also mentioned in his CMT bio, he started to sing and play guitar "just to get the attention of girls," but it seems like Green takes his music a lot more seriously than that. In fact, Green has been writing music since he was 14 years old and has toured the campus bar scene while he was studying at Jacksonville State University (where he was also a football player). Check out one of his performances in the video below.

When asked about how and why he got involved with Redneck Island, he told The Anniston:

I was playing at Florabama, and a couple guys came up and said, "We’re casting this show for CMT, we want you to be on it." I did it because I thought it could help my music, and I believe it will. If 40,000 people watch it and they mention my music, I believe it’s worth it.

I totally respect this guy's decision and it really seems like music is his greatest motivator, well, besides ladies and booze. Green has told CMT that "it's hard to have a relationship" because of his music and traveling, but that he is currently seeing one of his cast mates from the the show! Guess I'll have to start tuning in sooner than I thought because I love myself some good reality television drama. As it turns out, Green isn't half bad when it comes to his music, and he's got a self-titled EP out on iTunes and Spotify right now. I think he's got the looks, charm, talent, and throngs of adoring women to make it big beyond the swampy shores of Redneck Island.

More like this
Jason Derulo Is Launching A New Singing Show In The UK
By Maxine Harrison
18 Years After 'American' Idol, Jennifer Hudson & Simon Cowell Reunited On Her Talk Show
By Radhika Menon
Everything To Know About 'RHONJ' Season 13
By Brad Witter and Jake Viswanath
How To Stream 'Pretty Wild'
By Arya Roshanian
Get Even More From Bustle — Sign Up For The Newsletter