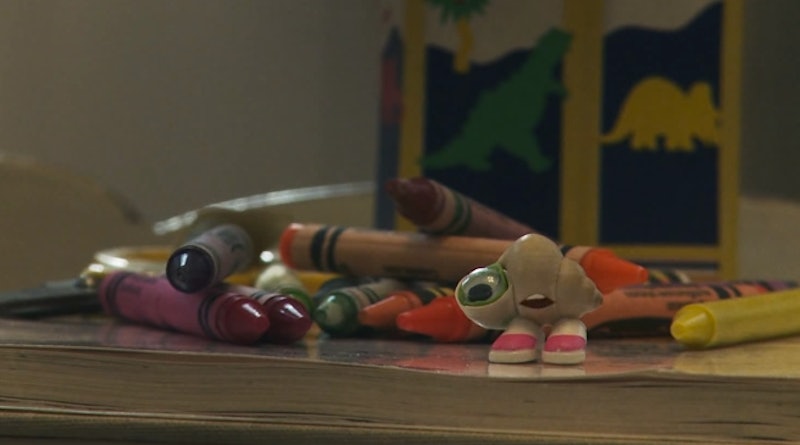 Squee's were uttered this week when hilarious treasure Jenny Slate did a cover of "Landslide" as the thimble-sized wonder Marcel the Shell. Let's never forget that when she's not starring in abortion rom-coms or classing it up as Jean-Ralphio's sister on Parks and Rec, Slate has a secret life voicing the most adorable shell on the Internet. And the two of them are having their best year yet.

The premise of Marcel's videos are simple: they detail his multiple hardships of being teeny-tiny. He has a pet scrap of lint tied to a hair named Allen. His car is a bug, which primarily directs him to puddles of syrup. His sister flew away after being used to hold down a balloon (a common problem for shells, he insists, but things have gotten better after they passed Marissa's Law). Whatever the case, though, Marcel looks at life with a ceaselessly pleasant optimism, believing that smiling is "worth it."

And when Marcel resurfaced this year, he sure had a lot to smile about. Here's all the thing that happened in the Year of the Shell.

A 'Marcel the Shell' Feature Length Film is Announced

Back in June, Slate revealed Marcel the Shell would finally get a real-life movie that would last longer than 3 minutes. More importantly, songs were promised and as we all know, Marcel has the voice of a minuscule angel. There's no way this movie could possibly fail, so long as Lifetime stays far, far away.

'Marcel the Shell with Shoes on Three' is Released

In Marcel the Shell's triumphant return, we learn that he's allergic to plants, uses deodorant between his shell and his shoes and tells it how it is about shrimps ("They're the idiots of the sea.") He also debuts a precious little song he learned at camp, which will having you crying so hard your heart will burst.

Marcel the Shell Comes out With a New Book

As a follow up to the New York Times Bestseller (I swear to God) Marcel The Shell: Things About Me, Slate and Fleischer-Camp released a second Marcel book in October. It's called Marcel the Shell: The Most Surprised I've Ever Been, and it's essentially the story of how Marcel is projected into the air and has some sort of existential experience. He also reflects on his Nana Connie, who sleeps in fancy French bread. Never has the phrase "I can't" held so much weight.

Slate went on Late Night with David Letterman to belt out this sad little ditty, Marcel-style. I have to say, Marcel's family tree seems mired in sadness.

DID SHE HAVE THIS MADE? IS IT FOR SALE? I immediately took to the Marcel the Shell section of Etsy, which, although it's small as Marcel himself, totally does exist.

And of course, Marcel the Shell Covers Fleetwood Mac's "Landslide"

As it is Marcel's been tugging at our heart strings with his original songs, but then Slate dared to cover Stevie Nicks in her teeny Marcel inflection. As expected, it's only a little snippet of the song (because Slate doesn't want Conan to pay royalties) but it is more than enough. God, Marcel can hold a note like a champion.