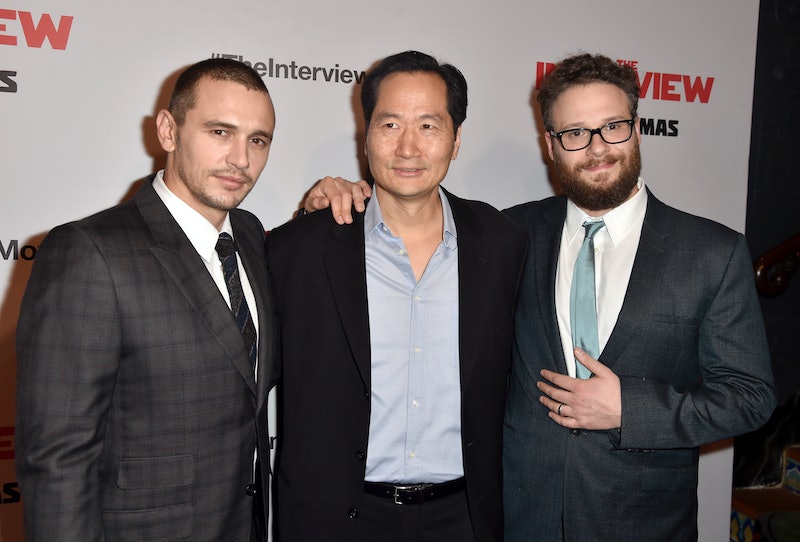 On Tuesday, the ongoing Sony hacking scandal reached new heights when they opted to cancel The Interview's New York premiere. This decision came after the hackers ominously referenced 9/11 and threatened to attack theaters that ignore their warnings by choosing to air the film. Apparently those threats were serious enough to prompt Regal Entertainment, AMC Theatres, Cinemark and several other major theaters to pull the film . As of Wednesday, the most extreme reaction yet came from Sony Pictures, who canceled The Interview altogether.

In a statement, Sony expressed disappointment at having to cancel the release of the comedic film, which stars Seth Rogen and James Franco. The controversy stems from the movie's plot, which revolves around an assassination attempt on the life of North Korean leader Kim Jong-un. As a result, hackers launched a mercilless attack on Sony, that resulted in a massive email leak of employee salaries and social security numbers, confidential emails, celebrity names and aliases, and more private information.

In response to the hackers' 9/11-like threat, the Department of Homeland released a statement claiming that, at the time, there was "no credible intelligence to indicate an active plot against movie theaters within the United States."

While the reactions on Twitter have been overwhelmingly negative, most people's opinion seems to fall into three categories:Those who support Sony's decision:

Those who are pissed and feel like this is a win for the hackers:

Those who are even more excited about seeing the movie:

More like this
A New Portrait Shows King Charles With William & Kate Before The Queen’s Funeral
By Stephanie Topacio Long
Holly Willoughby & Phillip Schofield #Queuegate Drama, Explained
By Sophie McEvoy
The Queen’s Cause Of Death May Not Be Formally Announced
By Shahed Ezaydi and Catharina Cheung
Two UK Cities Are Now In The Running To Host Eurovision 2023
By Sam Ramsden and Rachel Mantock
Get Even More From Bustle — Sign Up For The Newsletter