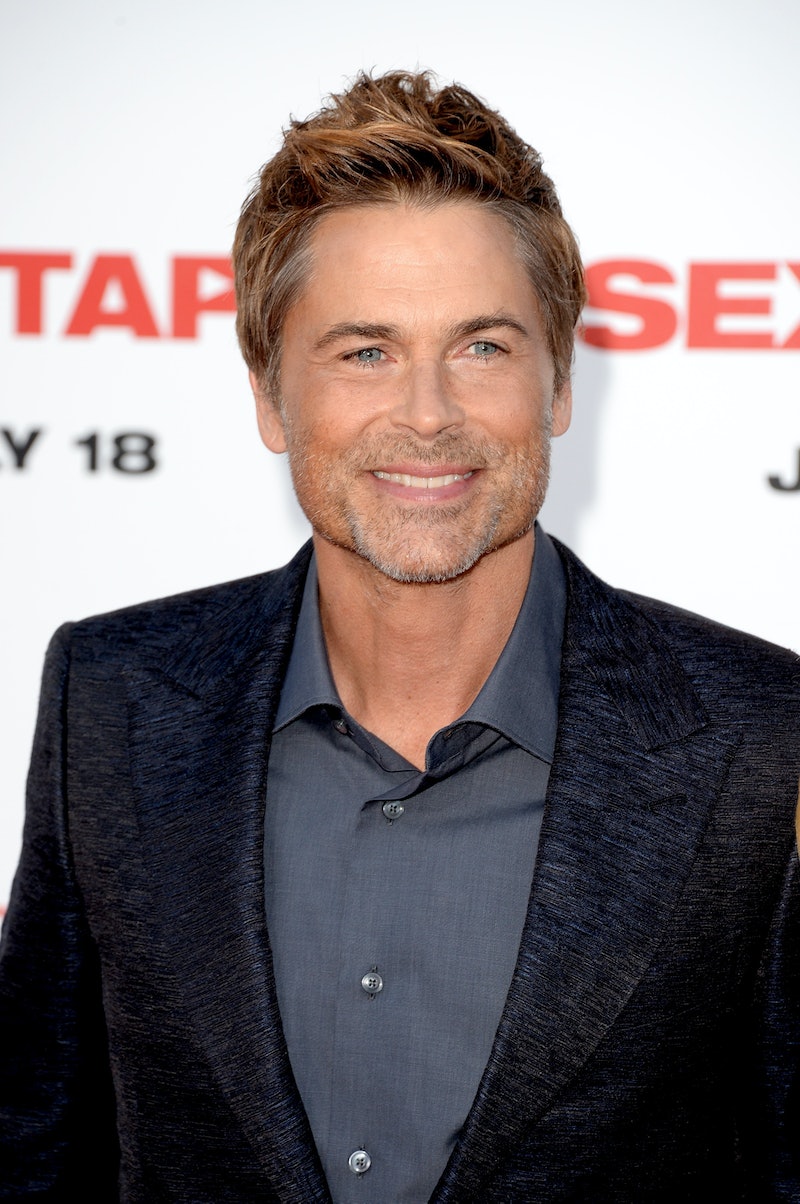 In response to the escalating situation surrounding Sony's impending theatrical release of The Interview taking a shocking turn today — that is, Sony officially announced that they were pulling The Interview entirely due to terrifying threats of a September 11-like attack from hackers that breached their systems last month — it's understandable that the stars of the film would not be happy. Though it doesn't seem that many of them have released statements on their social media about the cancellation (yet), one has: Rob Lowe. After he appeared in the film as a bald parody of himself, Rob Lowe tweeted today how shocked he was by Sony's decision to pull The Interview — and compared it to the foreign policy of Britain's Prime Minister back in the '30s, Neville Chamberlain, that is often referred to as "Nazi appeasement."

"Saw @Sethrogen at JFK," Lowe tweeted today. "Both of us have never seen or heard of anything like this. Hollywood has done Neville Chamberlain proud today."

Chamberlain's foreign policy between 1937 and 1939 is often historically referred to as "appeasement" due to its base goal being to avoid war with the then-Nazi Germany by not angering them. Considering many suspect the country of North Korea — who are angered by the film's plot dealing with the assassination of their dictator Kim Jong Un — to be behind Sony's damaging hacking and the recent threats of violence against the US, Lowe's comparison is basically insinuating that buckling to threats from hackers now will set a precedent of appeasement in the future.

Previously, some stars — including Mindy Kaling and Judd Apatow — had been encouraging moviegoers to see the film when it was supposed to be released on Dec. 25 despite the threats.

Sony's statement, which was released Wednesday, is as follows:

In light of the decision by the majority of our exhibitors not to show thefilm The Interview, we have decided not to move forward with theplanned December 25 theatrical release. We respect and understand our partners’decision and, of course, completely share their paramount interest in the safetyof employees and theater-goers.

More like this
Twitter Has So Many Thoughts About ‘Don’t Worry Darling’ After Its Release
By Stephanie Topacio Long
A New Portrait Shows King Charles With William & Kate Before The Queen’s Funeral
By Stephanie Topacio Long
Holly Willoughby & Phillip Schofield #Queuegate Drama, Explained
By Sophie McEvoy
Everything You Need To Know About ‘Black Panther: Wakanda Forever’
By Bustle Editors
Get Even More From Bustle — Sign Up For The Newsletter