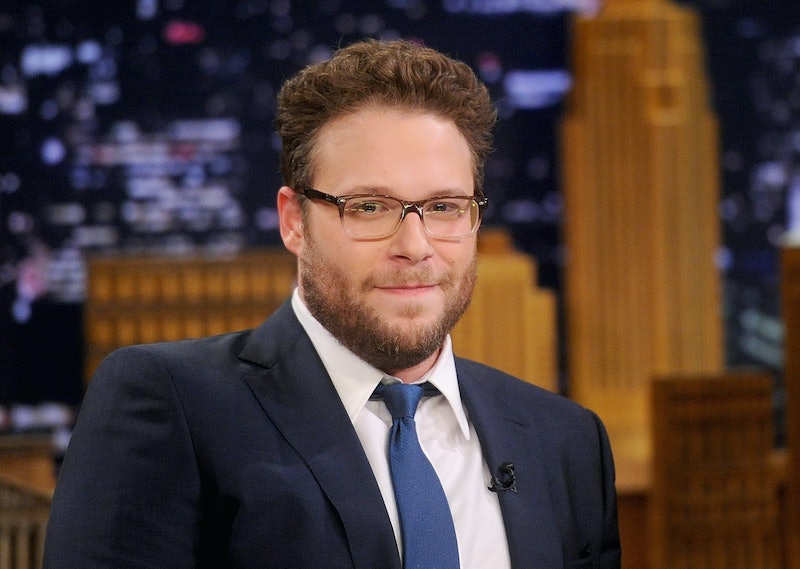 So, you heard The Interview was cancelled and your first thought was, "Yes, but what does Seth Rogen think?" I'm with ya, sister (or brother). I, too, was curious as to what the lead actors of The Interview, Seth Rogen and James Franco would think about the movie being scraped by Sony. After all, they were the reason I wanted to see it. Well, turns out Rogen doesn't have too much to say — at least not yet. TMZ caught up with the actor at the airport as he was arriving in Los Angeles Wednesday night, and while asked a ton of questions, he kept mum. (For the record, Franco has not yet commented on the news.)

In a video taken of Rogen at the airport, TMZ's reporter asks him if he's upset about the film being cancelled, if he's upset with Sony specially, and asks him what he thinks about Rob Lowe's comments that we gave in to the hackers. While Rogen seems clearly upset, it's hard to know if that's because of the film being cancelled or if it's because he's being following by a camera and a guy yelling questions at him. Literally the only time you can hear him talksin the video is when he asks for some space.

Since the actor hasn't exactly commented on the news, it's hard to know what he thinks about all of this besides the fact that he is probably upset. I mean, obviously, he spent a good deal of time working on this movie, so to have it pulled must be pretty devastating. Then again, maybe The Interview sucks and Rogen knows it and is glad it's not being released. Who knows!

Even though he doesn't say much, the video of Rogen (available at TMZ) is still worth watching because at one point he stops to sign an autograph (he's nice!) and at another a tiny adorable puppy emerges from his luggage — seriously!