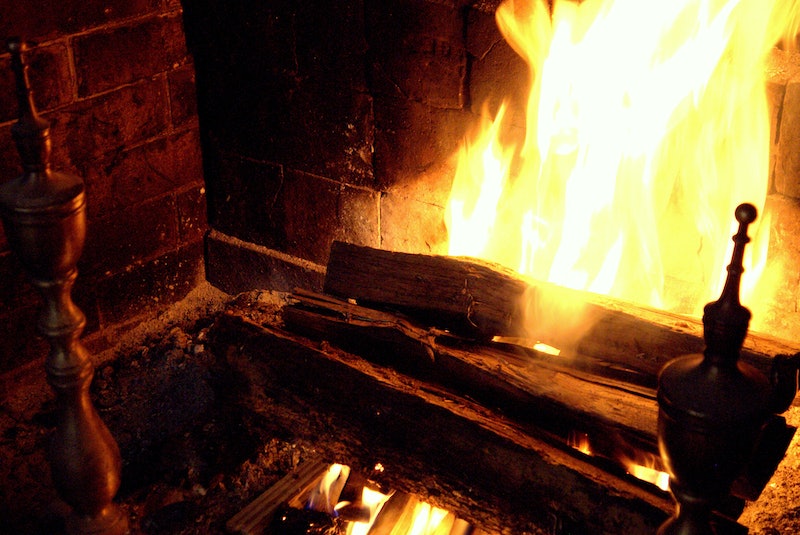 Last night, I did something completely outside my comfort zone. I took 45 minutes out of my schedule so that I could sit in complete stillness and watch the Yule Log (well, this Yule Log DVD. Who has a fireplace these days?). My (digital) crackling fire did not have Christmas music playing, just the sound of burning wood. I did not check my phone even once during that time. I didn’t switch over to old episodes of The Office (which is my standard background noise when I desire a brief period of zen), and I didn’t have any other screen in front of me other than the one I was watching. Being still for that long felt chaotic, because I started tallying up all the things I could be doing during that time instead of this.

It took about 10 minutes of internal panic before my mind settled and drifted to a place of reflection. Amazingly, even without any intoxicants in my system, my brain traveled down a path of profound truths you’d normally find uttered by a cluster of stoners stumbling around in the woods. Is this meditation, you guys? Because it was kind of awesome. Who knew a fireplace held such emotionally intellectual powers?

Gazing at the Yule Log — whether you have an actual one hanging out in your fireplace, or you're cozying up to a virtual fire like I did — has been a part of the holidays since basically forever, but up until now, I had never really given it much thought. It was mostly just a festive thing that happened in the background while we stuffed our faces with cookies and exchanged presents. But now? I think I just found my new Christmas tradition. Here’s how it all went down inside my head while watching the Yule Log, as told by GIFs. Warning — it gets pretty deep.

1. Fire is as beautiful as it is dangerous

I mean, just look at it. The dance of the flames is mesmerizing. Looking at it long enough, I'm almost inclined to reach out and touch it. Almost. I'm not an idiot. Also, it's on TV and not real, so I guess that's a good thing.

Another log could be added to this fire right now and the flames would grow, but what's the point? The logs on there now are enough to sustain a solid fire, and there's just no need to add or change anything about it. Also it's on TV, so I couldn't change it anyway. Ah, acceptance.

3. You are good enough

Just like this fire! In your natural form, your features are at their prettiest. Even when you get older and the wrinkles set it, adding any unnatural chemicals or fillers will not enhance your beauty, it will just make you look different. But whatever you decide to do with your looks, you are good enough. You are good enough to have all the things you want in life. As long as you believe it, that is all you need to win at life.

You aren't just good enough, you're way cool. It's easy to be lured into chasing what's considered "cool" or what's trending. But things given that coveted "cool" title only became cool because someone did them, said them, created them, or wore them without caring what other people thought. They are cool because of the level of confidence and swagger required to take a step outside the box and say, "This is me. This is what I like. And I do not need your approval." So whatever that is for you, as long as you lean into it without giving any f***s, it's cool.

5. ...so don't even stress because haters will always hate

Not everyone will get you. Not everyone will appreciate you. And you know what? That's OK. It's probably for the best, actually, because too much praise isn't good for anyone. If they hate, let 'em hate.

6. And it doesn't even matter what anyone thinks, because no love is as important as self-love

You cannot fully give your love to someone or something until that level of adoration is built within you. You don't even really understand what love means until you put your needs first and get to the point where you can look at yourself in the mirror and say, "You're amazing and you can do anything."

And learning to love is not an easy task. It's not even a task. It's more like a life-long climb to the peak of a mountain with intermittent sh** storms along the way. If love is the most fulfilling emotional experience a person could have, then why would the journey to it be smooth and perfect the whole way?

8. ...but jealousy and regret poison the soul

These are two pointless sensations that trigger absolutely nothing positive. They let your mind go to a dark hole of paranoia that will ultimately make you behave like someone other than yourself. Who is this insecure person? Do not let them win. Let go of jealousy and regret as soon as you possibly can, before it ruins you.

Worrying is the step before full-blown paranoia, and it has the power to waste so much of your time. I worry constantly about things that never come to pass. Then what? Then I look back at the morning spent looking at WebMD to determine if my sore throat is actually lung cancer, which WebMD can't confirm for me anyway.

10. ...and there is always someone who is having a worse day than you

When you are a generally healthy human with a job, food in the fridge, and a roof over your head, then you probably don't have any complaints that are legitimate. There is always someone who is in a worse situation than yours, and the more time we spend comparing ourselves to others who we perceive to have more than we do, the closer we get to needless depression.

Do you know how many people are suffering from a serious ailment or disease? There are probably more individuals on our planet with diseases than without. So if you got a clean bill at your last checkup, it's time to thank your lucky stars, because not everyone has their health to rely on.

I wonder how much time I spend each day looking at my phone. I'm not sure I want to know, because it's that much. I could easily put the phone down and engage with people face-to-face, or even just go outside in the fresh air and look around. The wallpaper on my phone is a grassy field on a foggy day. I could actually go outside on a foggy day and look at the grass and have a much better feeling than the one I get staring at my phone. WHAT AM I EVEN DOING WITH MY LIFE.

Man, this mediation sesh is starting to get real...

13. And humans need to slow down

People in 2014 look ahead, and occasionally they look back, but they are rarely ever present in the moment. We all need to slow down, ASAP, before our hearts explode from stress.

14. Each new day is a chance to start over