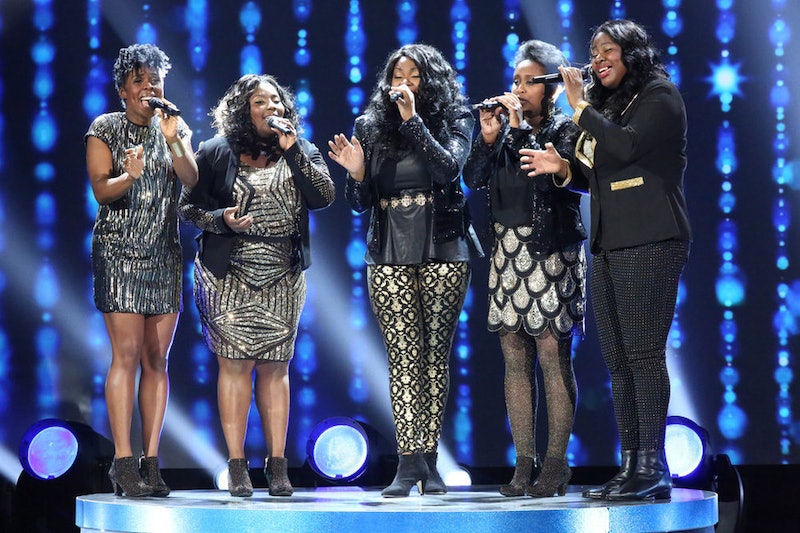 How is it that after four seasons and a few dozen a cappella groups featured on the NBC series The Sing-Off, it seems almost ridiculous that an all-female group has yet to win the series. But I guess that's why that very statistic is brought up as a joke in Pitch Perfect. The New York-based group Traces however could be the first all-female group to take home the crown in Season 5's two-hour special as their sound is as raw and powerful as any of the best female divas that have come before them. However, they do have quite the fellow powerhouse groups to beat, including a popular collegiate group and a group created with Sing-Off alums over the years.

Traces does a great job blending the gospel and hip-hop sounds together into a wonderfully rich, soulful and insanely entertaining group. Despite having such individual and beautiful voices that are not classically trained, which is surprising for most a cappella groups, Traces does a fantastic job of not overpowering each other while performing. In fact, they sound better together at times than separate. The group was able to wow judges with their rendition of Tina Turner's "River Deep, Mountain High" which showed off their vocal power and their female power, a trait that needs to be embraced to truly win in my opinion.

The group made it past the first round of competition, no surprise here, and were given the song "I'm Every Woman" by Jewel which famously was performed by two extremely memorable divas, Chaka Khan and Whitney Houston. The group did not disappoint and made the song more than just a solo show-stopper. The Sing-Off judges Shawn Stockman from Boyz II Men, Jewel and Patrick Stump from Fall Out Boy all pointed out that while the leader and main singer of Traces, Keisha, was rightfully incredible, the other performers in the group were also mind blowing, especially alto singer Tameeka who hit some of the lowest bass notes I've ever heard a woman sing outside of famous singers like Nina Simone.

But Traces does have quite the competition with collegiate group Melodores providing an almost perfect rendition of "Take Me To Church" from Hozier and Sing-Off supergroup The Exchange's second performance of "Sing" from Ed Sheeran which might have been the best rendition of that song that's come out in recent months. Even if they don't win, Traces will make quite the name for themselves even months after the series ends. They're just too good and too memorable to be forgotten. And their girl power mentality along with their talent won't allow them to step out of the spotlight. Rightfully so.

More like this
Jason Derulo Is Launching A New Singing Show In The UK
By Maxine Harrison
18 Years After 'American' Idol, Jennifer Hudson & Simon Cowell Reunited On Her Talk Show
By Radhika Menon
'Big Brother' Is Already Looking For New Houseguests To Compete In Season 25
By Brad Witter
Here's The Full List Of Zach's Confirmed & Potential 'Bachelor' Contestants
By Kadin Burnett and Grace Wehniainen
Get Even More From Bustle — Sign Up For The Newsletter