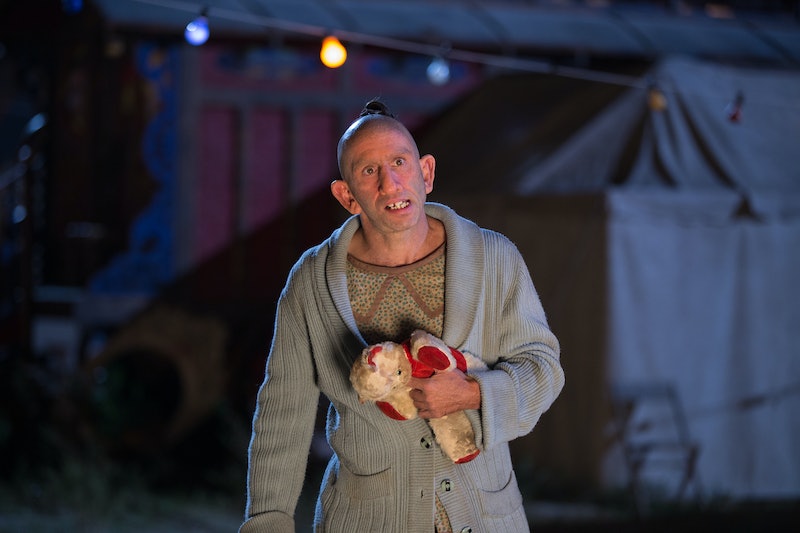 I, of course, assumed another person at the freak show would die in American Horror Story: Freak Show's episode "Orphans," but I hadn't expected the episode to start right off the bat with it. Salty — best known as the "pin head" companion of Pepper — has died, but how did Salty really die? Elsa said, "Salty died in his sleep, right next to his soulmate — a stroke, one presumes." And since we know what a terrible liar/actress Elsa is (based on her horrible performance of surprise after Ethel's death was discovered), it seems like Elsa really believes that's what happens. But us fans know Stanley's real intentions better than Elsa does and Salty's death reeks of foul play.

Salty must have been dead for a little bit since his body had already started to decay (Amazon Eve said that his body was already starting to smell) — but poor Pepper didn't want to leave him. It would make sense if Salty died of a natural death due to his complicated medical state, but this is American Horror Story, people. Does anyone ever really die of natural causes? And what really makes the entire thing the most suspicious is how Stanley handled Salty's death. He tried to convince Elsa that he should take care of the dead body. (She knows he knows how to take care of dead bodies thanks to Ethel, but isn't she just even a little suspicious of this? He's a Hollywood talent scout! Where did he acquire these skills?)

To give Elsa a little credit, she wanted to give Salty a proper burial, but finally gave into Stanley — he is the one who is going to make her famous after all (riiiiiiight). And Stanley went right to work at cutting off Salty's head and sending it to the medical oddity museum where it was displayed next to Ma Petite. Stanley could have just made the best of Salty's death (ugh, he's so gross), but knowing what levels he will go to in order to make money off of the people at the freak show, I just don't believe it.

And to make Salty's death even more tragic, flashback scenes narrated by Elsa also provided insight to how much Pepper and Salty really cared for each other. Pepper was 18 years old in an orphanage when Elsa took her on as her "first monster." Elsa knew Pepper needed a companion, so she wrote around looking for a person with her similar condition, which is how Salty arrived at the freak show. According to Elsa, they fell in love at first sight, and she officiated their wedding, which makes Salty's death even more heartbreaking — especially with regards to Pepper.

Hopefully, we'll get to the bottom of how Salty really died. And regardless of whether Stanley had anything to do with it or not — he still needs to get gone. Dandy — I'm looking at you.

More like this
‘Squid Game’ Creator Hwang Dong-Hyuk Just Dropped A Major Season 2 Tease
By Brian Anthony Hernandez and Bustle Editors
This House of the Dragon Character Will Create Another Scandal For Rhaenyra
By Kadin Burnett
Nicola Coughlan Shared A Lady Whistledown Excerpt From ‘Bridgerton’ Season 3
By Grace Wehniainen, Alyssa Lapid and Sam Ramsden
Devi Is Going To Meet A “Smoldering Bad Boy” In ‘Never Have I Ever’ Season 4
By Jack Irvin and Gabrielle Bondi
Get Even More From Bustle — Sign Up For The Newsletter