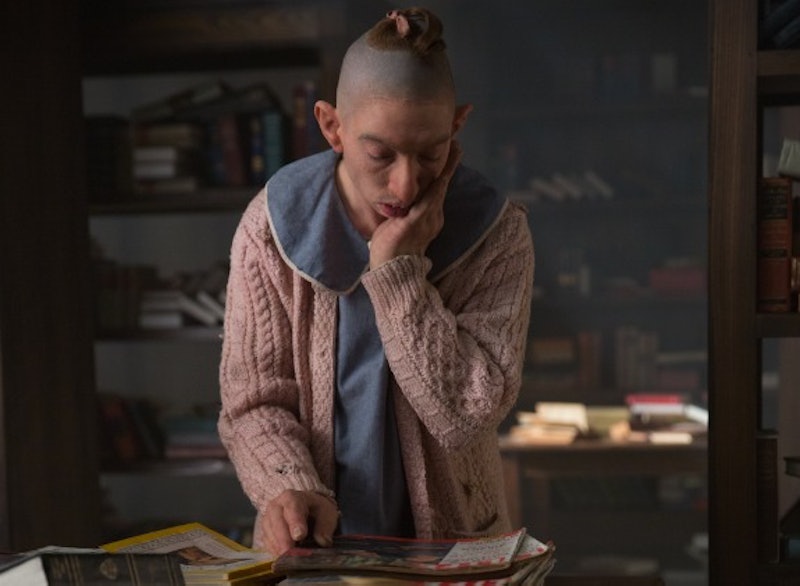 It's been a question we've all wondered about ever since Pepper first made her Asylum debut and now AHS: Freak Show has finally provided more details into Pepper's backstory. And here's a big hint: Wednesday night's episode title is very, very fitting. "Orphans" reveals that Pepper was actually an orphan when Elsa found her. Apparently her sister found her to be too much of a burden and since their mother was dead and father gone, she decided to shirk Pepper off to be somebody else's problem.

Alone and abandoned, Pepper went by relatively unnoticed at the orphanage. So much so that Elsa was able to pretty much walk right out of there with her — giving her the chance at a better life rather than rotting away in one of those dreary rooms. All Pepper ever wanted was a family, and that was something Elsa was able to provide. (Consider it one of the few kind things Ms. Mars has done all season.)

Until Elsa provided Pepper's real family to the Asylum character. And that's precisely where things went wrong. After reconnecting with her sister, Pepper was forced to care for her disabled nephew while playing housekeeper... until Pepper's sister and brother-in-law hatched a plan to kill their own child. And frame Pepper. And send Pepper to Briarcliff. (For those of you who are unfamiliar with Asylum, it's the very place where Pepper herself ends up dying, though we don't actually witness it.)

And so, she reaches the hallowed dark halls of Briarcliff, where she basks in the kindness of Sister Mary Eunice (you know, until the whole Satan thing and all) and in the knowledge that... Elsa becomes famous?! (More on that here.) I guess, in a way, Pepper's fate was always sealed. But that's just in typical Ryan Murphy fashion. Giving the most heartbreak and pain to the characters that are least deserving. (You're killing me, Murphy!)

So Elsa may have brought her into the light (the spotlight, that is) for a little while, but now that Salty is dead and Asylum is on the horizon it seems more apparent than ever that Pepper's outcome, unfortunately, has always been a bleak one. Now if you'll excuse me, I have to go ugly cry into a pillow somewhere. BRB.