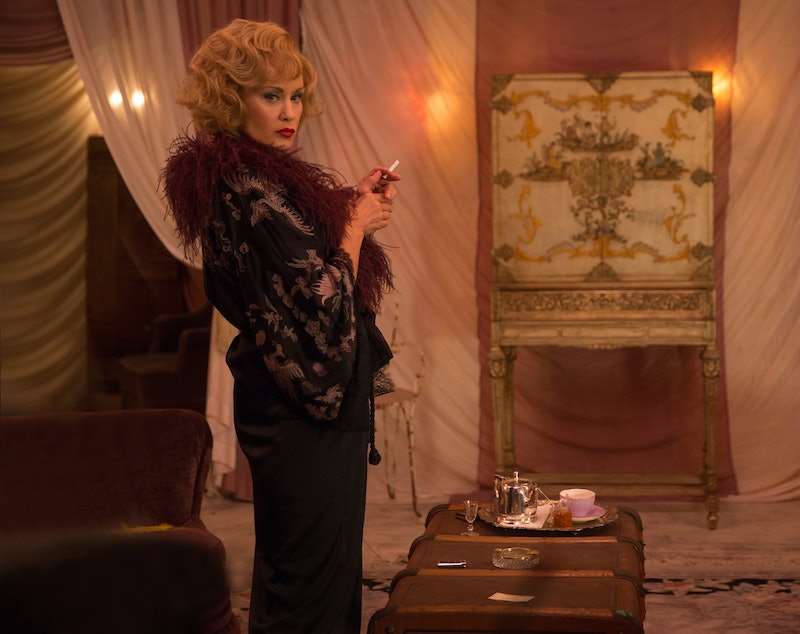 It was a night of surprises on Wednesday's American Horror Story: Freak Show episode "Orphans." Not only did we get some major details into Pepper's AHS background, but in a shocking twist fans were also given insight into Elsa Mars' future after Freak Show . And guess what? Not only will she apparently make it out of this season unscathed, but she'll finally reach her lifelong goal: Elsa becomes famous. I guess it goes to show, good things happen to… uh… well, people.

Let me explain. After Pepper gets sent to Briarcliff in 1962, as we all knew she would, Sister Mary Eunice decides to give their newest patient the responsibility of organizing all of the magazines in the library. (Was anyone else shocked to learn Briarcliff even had a library?) And whose face do we see appear on the July 6, 1958 cover of Life magazine? None other than Elsa herself, who apparently has become a major success in the television industry. Surprise! I guess Stanley was good for his word after all then?

But no matter how exactly it all comes about, this is a very telling detail Ryan Murphy has just shared with us given that we now know Elsa's eventual outcome. Not that we thought he was going to kill his leading lady off anytime soon. (One does not simply kill someone like Jessica Lange.) However, it's interesting that he opted to erase any doubt or fear that we had on the matter.

And while I'm not exactly certain Elsa was deserving of such a happy ending due to the murderous behavior we've seen from her this entire season, but when it comes to Pepper, she proved to be shockingly selfless. So to see Pepper fondly gaze upon her former boss's picture, made for a very moving moment indeed.

So congratulations on your fame, Elsa. Know that you have at least one big fan out there.