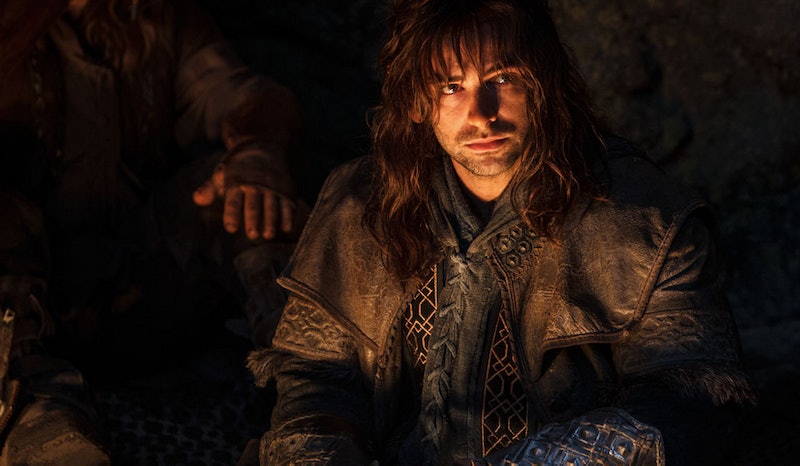 Major spoilers ahead. Fans of the original works of JRR Tolkien likely remember that Kili The Dwarf is an ill-fated companion of Thorin and Bilbo. However, with the addition of his romantic storyline with Tauriel in Peter Jackson's second Tolkien-inspired film franchise, I found myself wondering if Kili the Hot Dwarf might not die in The Hobbit movies the way he does in the books. After all, the films build up to this romantic conclusion, featuring a character who wasn't in the book. Why throw it all away when Kili dies just as he does in the book?

Unfortunately for folks like me, who've come to love not only the handsomeness of Kili actor Aiden Turner's dashing visage, but the character himself, Jackson's film stays true to the books in this sorrowful twist. Kili dies, no ifs, ands, or buts about it.

The silver lining, especially for those who were fans of the controversial Tauriel/Kili/Legolas love triangle which was fabricated for the films, is that Kili and Tauriel do get one final scene together and it is epic. When Thorin and his right hand men run up the hill to take out what they assume is the last of the orc army, they fall right into a trap. Almost instantly, the gruesome devils drop Kili's brother Fili from a high ledge, killing him immediately.

Kili takes longer, but the bastards find him. Tauriel rushes in to help rescue her could-be-maybe-she's-not-so-certain-yet love (a welcome addition to the original text, if you ask me, since Tolkien failed to include many women — especially brave ones who fight — in his novel). Unfortunately, it's not enough. She's knocked (nearly) out and the orc drives his blade straight through Kili for what seems like a full 15 minutes.

This death scene is painfully long, but fully conveys the depth of our sadness at losing Kili — a courtesy that wasn't paid as kindly to his brother. Unfortunately, Legolas swoops in to finish off the aggressor while Tauriel lies barely conscious offscreen.

And while I'm not about to complain that the movie stuck by the book when it comes to Kili's end — I'm a stickler for that sort of thing — I will say that if the writers felt the need to bring in Tauriel only to have her lose the dwarf in the end, they could have at least used it to let her have one more burst of badassery to avenge Kili's death. Orlando Bloom is cool and everything, but if I had to lose Kili again, I had hoped it would come with some sort of silver lining. Tauriel taking charge should have been that lining.

Then again, it's probably not wise to lay too many hopes in the hands of a man who turned a simple, wonderful children's book into a thinned out three-film saga.

More like this
This Episode 6 Moment Foreshadows Viserys' Fate On 'House Of The Dragon'
By Grace Wehniainen
'The Distant Echo’s Ending Mirrors 'Karen Pirie' In One Crucial Way
By Catharina Cheung
Nicola Coughlan Shared A Lady Whistledown Excerpt From ‘Bridgerton’ Season 3
By Grace Wehniainen, Alyssa Lapid and Sam Ramsden
Everything You Need To Know About 'Rings Of Power' Actor Charlie Vickers
By Darshita Goyal
Get Even More From Bustle — Sign Up For The Newsletter