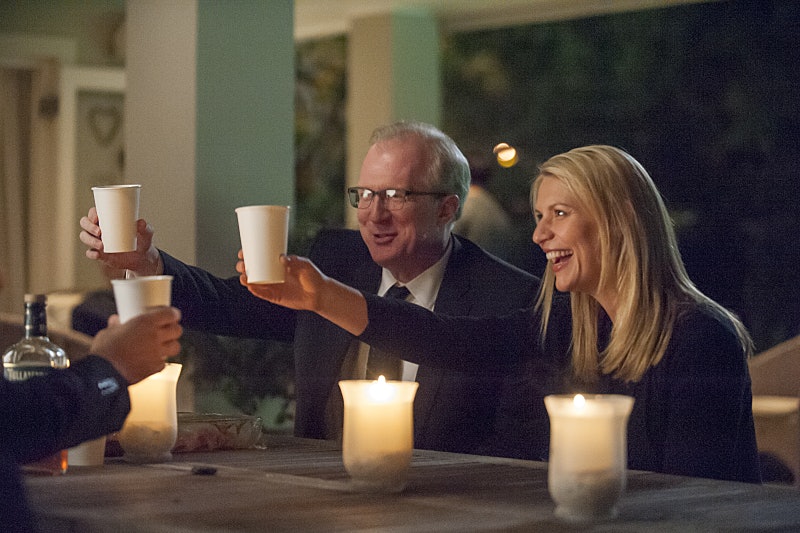 Well, thank goodness. After the kick-in-the-pants reboot/bonafide emotional rollercoaster/superlative spy thriller that was Season 4, Showtime has officially renewed Homeland for Season 5. The show is set to air 12 new episodes in 2015, huzzah! But when will Homeland Season 5 begin? There's no word on an exact premiere date yet, but given the show's history, I think we can safely guess that we're going to be reuniting with Carrie and whoever's left in the gang by late September/early October of next year.

It's going to be a long wait (that's the single biggest drawback of falling in love with a 12-episode per year cable drama, isn't it?), but I'm sure the season to come will be more than worth it. I've been a pretty die-hard fan of Homeland from out of the gate, and I've stood by it through thick (Season 1!) and thin (ahem, Season 3). That said, I think Season 4 might just have been the best yet — and if Season 5 can beat that, well, we're in for quite the ride. Keep on keepin' on with all the reviving, reinventing, and regenerating (I don't know about you, but I got a very Doctor Who-esque changing of the guards vibe from this season's fairly all-encompassing reboot), eh Homeland?

Yep, I'm officially forecasting a 99 percent chance that Season 5 is going to be as fabulous as all heck... but what else do we know? Not much, unfortunately — showrunner Alex Gansa went out of his way to point out that not much (or anything at all, really) is set in stone in a recent interview with The Hollywood Reporter. When asked about the upcoming season, he demured and said, "We have some options, and we're discussing them, but we probably won't make any decisions until March." Gah, why must you torture us so? Would it have killed him to give us a ballpark guess about what country the show will set in? Also, we need casting gossip! Will Carrie be taking on a new protege, post-Fara? Will we get to see more of the recently demoted Senator Lockhart? Will Carrie's mom (the newly-cast, ultra-fab Victoria Clarke) be coming back?

Gansa et al may be playing their cards (very) close to the chest, but I think the Homeland creative team has very handily earned our blind trust by this point. Here's to a fifth season even more epic than its fourth!