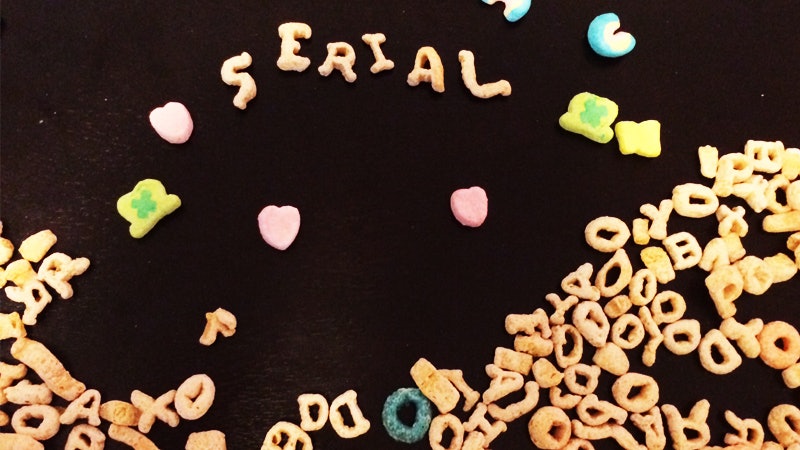 Good morning! Anyone else wake up abnormally (like 2+ hours) early for the final episode of Serial? Yeah, me too. Well here's the good news and the bad news. It's over now. IT'S OVER. #somanyfeelings. (And a requisite SPOILER ALERT for what's ahead!) But, guys, even Adnan wanted an ending. Sarah Koenig's reexamination of the 1999 murder of Hae Min Lee has been nothing short of a cultural phenomenon. I've talked about it, and Sarah's amazingly soothing voice, with every single human who would listen, and even with unsuspecting people inside coffee shops. Did podcasts just kill primetime TV? If you think so, here's a list of 12 other podcasts to help with your Serial withdrawal.

To immediately ease the pain of losing something we've all become so attached to, I'm going to kick it old school and call in some trusted friends to make us all feel better. You probably know them too. They're Alphabits, Lucky Charms, and Fruit Loops. After all, having someone tell you a story while you close your eyes and just listen is the most old school of all things.

Anyway, let's get into the whole grains and toasted marshmallows of the case (see what I did there?) by examining the final episode of Serial with cereal. I can't promise this recap will be magically delicious, but it will be a good source of your daily fiber. Here's what happened on the last episode...

Like every great episode you know how Episode 12 started. Mail Kimp, we will miss you. Mail Chimp? Meh, not so much.

We also found out there was a letter to Don in Hae's car that was never delivered. And somehow Don just found out about Jay's involvement in the case during this podcast. Like this past Saturday. His weekend definitely has mine beat. Conspiracy theorists, have at it!

The one piece of semi-solid evidence we do get is that the Nisha call is basically useless. Though AT&T contracts in 1999 stated that they don't bill for unanswered calls, there's a loophole. (Cue the murder mystery music.) "AT&T won't charge for unanswered calls, unless the call isn't terminated within a reasonable time," they explained in the podcast. Today, that means 30 seconds or longer. Does this mean it was a butt dial? We'll never know. But this might have been enough evidence to get the call thrown out in the first place.

Another new name: Ronald Lee Moore. Deirdre Enright and the Innocence Project had quite the breakthrough this past weekend. Ronald Lee Moore, now deceased, was jailed on and off for similar crimes. He was however released from jail on Jan. 1, 1999, just 13 days before Hae's murder. The Project has Adnan's blessing to go ahead with examining DNA evidence.

"I want to know," Adnan said of the DNA. "You guys had it sitting for 16 years and you never tested it."

So now we have 5+ names floating around, different theories, but mainly just lots and lots of speculation. Dana, Julie, and Sarah are convinced that both Adnan and Jay are lying. The question is, which lie is the lie that is minimizing the crime? We'll probably never know.

But Sarah did answer one question for us. If she was on the jury, what would her verdict be? "It's not enough to me to send anyone to prison for life, let alone a 17-year-old kid," Sarah Koenig stated with conviction near the end of the Episode 12.

Though the last 5 minutes left us with a ton of questions unanswered, at least we know where Sarah stands on Adnan. She doesn't know whether or not he did it, but she doesn't think there was ever enough evidence to put him in jail — for life.

Where do I stand? Well, I really just want to know why Alphabits are so devoid of random letters like N's and C's. That should keep me busy until the reality sets in that this podcast really over.

More like this
What Is 'Pretty Wild' Star Tess Taylor Up To Now?
By Morgan Leigh Davies
Where Is Armie Hammer’s Ex-Wife Elizabeth Chambers Now After 'House Of Hammer'?
By Grace Wehniainen and Radhika Menon
After The Bling Ring, Nick Prugo Was Embroiled In Another Scandal
By Arya Roshanian
What’s New On Netflix: Ana De Armas’ 'Blonde' & A Nick Kroll Special
By Arya Roshanian
Get Even More From Bustle — Sign Up For The Newsletter