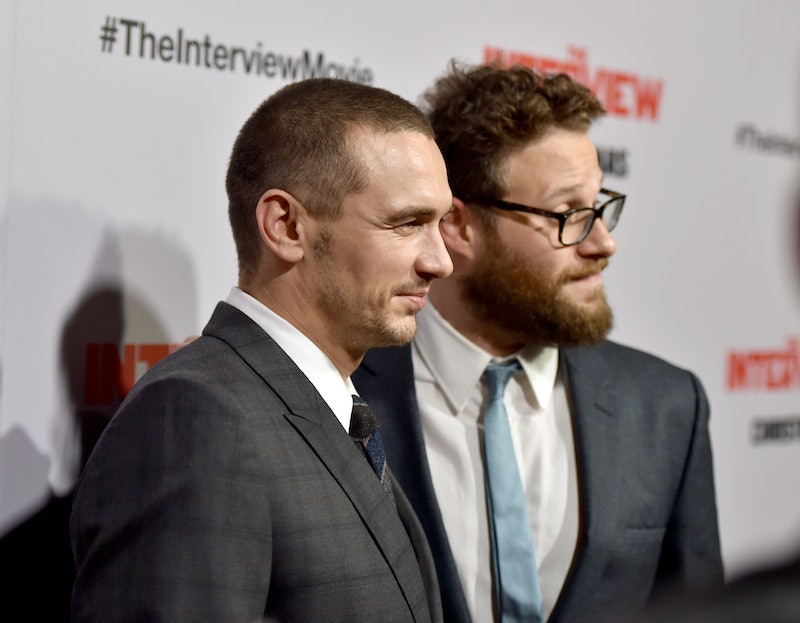 UPDATE: According to the Huffington Post, two theaters that were planning to air screenings of Team America: World Police in place of The Interview tweeted that Paramount Pictures banned public screenings of Team America. The news is unconfirmed by Paramount themselves, but the tweets indicate that all theaters — including the Texan one below — will not be receiving permission from the movie studio to screen the replacement film.

After Sony made their controversial decision to have the James Franco and Seth Rogen comedy The Interview pulled from theaters, canceling the release of the film entirely in response to threats of terrorist attacks from a mysterious group of hackers, the debate has begun to rage over whether this was a smart, moral decision or a cowardly move that resulted in a defeat for free speech and a victory for terrorism. However, not every theater is taking the cancellation lying down. One theater in Texas is showing Team America: World Police as a replacement for The Interview. The significance? Team America is also a film about assassinating the leader of North Korea — except it was released back in 2004 when that leader was Kim Jong-il.

According to The Hollywood Reporter, creative manager and programmer James Wallace of the Dallas cinema planning the event has explained, "We're just trying to make the best of an unfortunate situation." Apparently, American flags and "other patriotic items" will be given out to audiences who come to see the film. The film itself will be shown for free, one night only on December 27, and features the tagline, "Putting the 'F' back in Freedom."

For those who have never seen the R-rated action comedy that was created by the same minds behind the popular cartoon South Park, the film is summarized as focusing on "on a fictional team of political paramilitary policemen known as Team America: World Police, who attempt to save the world from a violent terrorist plot led by Kim Jong-il," according to Wikipedia. Kim Jong-il, for those who aren't aware, is the father of Kim Jong-un, the subject of the assassination plot that would have been hilariously attempted in The Interview.

Quite honestly, the Alamo Drafthouse Cinema is being as unsubtle in their message of American liberty as humanly possible, but I can't say I entirely blame them. However, the fact remains that despite being an animated film entirely starring puppets, Team America: World Police is probably ten times more offensive toward North Korea than The Interview seemed like it was going to be. That's probably why this decision has been embraced by so many Americans, the film title trending on Twitter on Thursday morning as people began to reflect.

I haven't seen The Interview, so I can't judge it against Team America, but from what I know of Team America then the Franco-Rogen comedy would have to really go hard in order to be somehow more offensive than the 2004 film. It really says something when the most memorable scene from your movie was an overly long sequence of romantically-framed puppet sex, so by comparison The Interview seems like not much of anything. Whether other theaters will follow Texas' example and show Team America for one night instead or whether this form of protest will remained confined to the Dallas/Forth Worth location of the Alamo Drafthouse Cinema still remains to be seen, but those who are curious and can't make it to Texas can find Team America on Netflix for their viewing pleasure.

More like this
A New Portrait Shows King Charles With William & Kate Before The Queen’s Funeral
By Stephanie Topacio Long
Buckingham Palace Shuts Down Rumour About King Charles III's Coronation
By Sophie McEvoy and Sam Ramsden
Holly Willoughby & Phillip Schofield #Queuegate Drama, Explained
By Sophie McEvoy
The Queen’s Cause Of Death May Not Be Formally Announced
By Shahed Ezaydi and Catharina Cheung
Get Even More From Bustle — Sign Up For The Newsletter