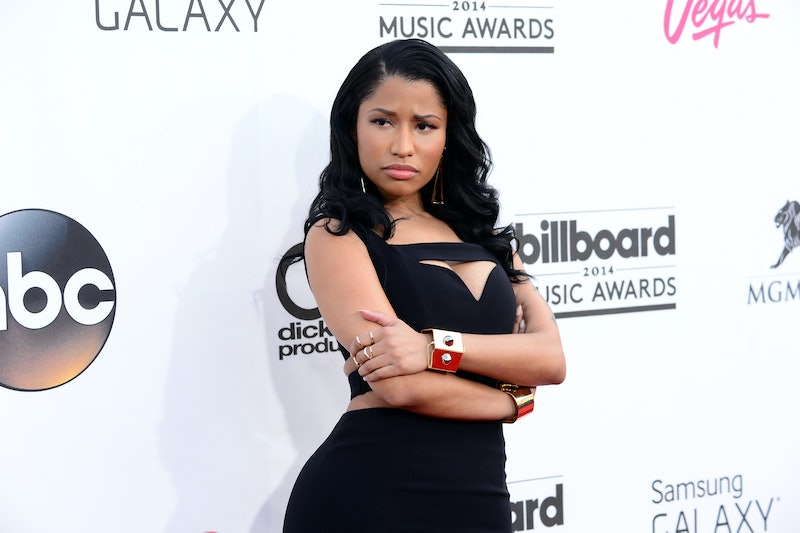 I still can't quite believe the clips that were pulled from Nicki Minaj's appearance on Watch What Happens Live on Wednesday. Literally, my mind can't quite process it no matter how many times I watch them. Sure, the "Anaconda" rapper has been asked so many times about her romantic history — or a potentially romantic future with close friend Drake — that she based her single "Only" featuring Drake and Lil Wayne on those rumors, but this just seemed excessive. Between audience questions and his own game Plead the Fifth, host Andy Cohen's interview with Minaj had a sexist flavor to it that just left a bad taste in my mouth.

I knew that things were going to go south when Cohen began to read off viewer questions and one bold viewer asked, "If you were single and Drake was single, would you want to sleep with him?" Sure, this question has been following both Minaj and Drake for the entirety of their relationship together, but the way you just saw Minaj's face fall into immediate stoicism as she refused to expand on her answer beyond, "No," just made me sad. To me, that sort of implies that Minaj was hoping her verse on "Only" — and the entire song itself — might put that rumor to bed once and for all.

Later, during her round of Plead the Fifth, Minaj was asked, based on a line from her verse in Ciara's "I'm Out," who had the biggest d*** in the music industry. The rapper seemed so surprised by the question and needed a long pause before she answered, "I've never seen anybody's penis in the industry, actually. I saw one penis for 10 years. That's all I'll say about that." However, quite possibly the worst moment of all to come from the Watch What Happens Live interview is the fact that on Thursday, after it aired, the only thing everyone seems to want to talk about is that Minaj suffered another nip slip during the appearance.

Guys, stop. Hold on. Rewind. I know this is probably exasperating and a little hypocritical coming from someone who makes a living writing about the lives, romantic or personal, of celebrities, but can we please stop asking Minaj if she's sleeping with Drake? Can we definitely make it a point not to ask Minaj how many guys she's seen naked? Can we just not? I know that these moments are hardly the point of the otherwise innocuous 21 minute interview, but they just reek of so much sexism in so short a span of time that I can't even handle it. Is anyone asking Drake how many vaginas he's seen based on his explicit lyrics? When's the last time Drake was asked if he would sleep with Minaj?

Another problematic aspect of this line of questioning is that any dedicated Minaj fan knows that the rapper had a bad split with her ex, Safaree "SB" Samuels — a split that inspired the content of many of the saddest songs off her recently released album The Pinkprint. Meanwhile, Drake has been largely single since splitting up with Rihanna and, newsflash to the world, this is not the first time that the pair have been single at the same time. There are only so many times they can tell the world that they are just friends before continually being asked about a romantic element to their relationship becomes annoying rather than funny. (I'm sure that Minaj, at least, is already past that point.)

The fact that no one is talking about the sexist slant to her Watch What Happens Live interview, despite the clear discomfort you can see in Minaj's face with each pointed question, is just further proof of exactly how insidious misogyny can be. When we don't even notice when we're being misogynistic, when we don't even notice that what we're watching has problematic elements, that's when the trouble truly starts. I am not blaming Cohen for the track the interview fell onto, but I do think that it deserves more attention than it has received. Instead of publicizing that this is, apparently, the latest in Minaj's long history of nip slips, let's publicize that Minaj's post-Pinkprint interview just had to ask about her sex life at some point.

Meanwhile, Drake gave an interview for the first time after the rumors that he was punched by P. Diddy at a night club and no one asked him about Minaj at all. (To be fair, no one asked him about getting punched by P. Diddy either.) That's a problem, and it's a problem that's deserving of more attention than it's getting. With The Pinkprint, Minaj has achieved one of the most thoughtful, poignant albums in her career, one which really showed off her broad range of talent. Let's stop asking the same old questions about her love life. She is so much more than who she is or isn't sleeping with.

Check out the full interview below.

More like this
Everything To Know About Taylor Swift’s 10th Studio Album, 'Midnights'
By Grace Wehniainen and Jake Viswanath
Is Dua Lipa Dating Trevor Noah? New Photos Show Them Kissing & Hugging
By Brian Anthony Hernandez and Martha Sorren
Wallows Want Their Own Epic “Lizzo Flute Moment”
By Jake Viswanath
Lizzo Twerks While Playing James Madison's 200-Year-Old Crystal Flute Onstage
By Radhika Menon
Get Even More From Bustle — Sign Up For The Newsletter