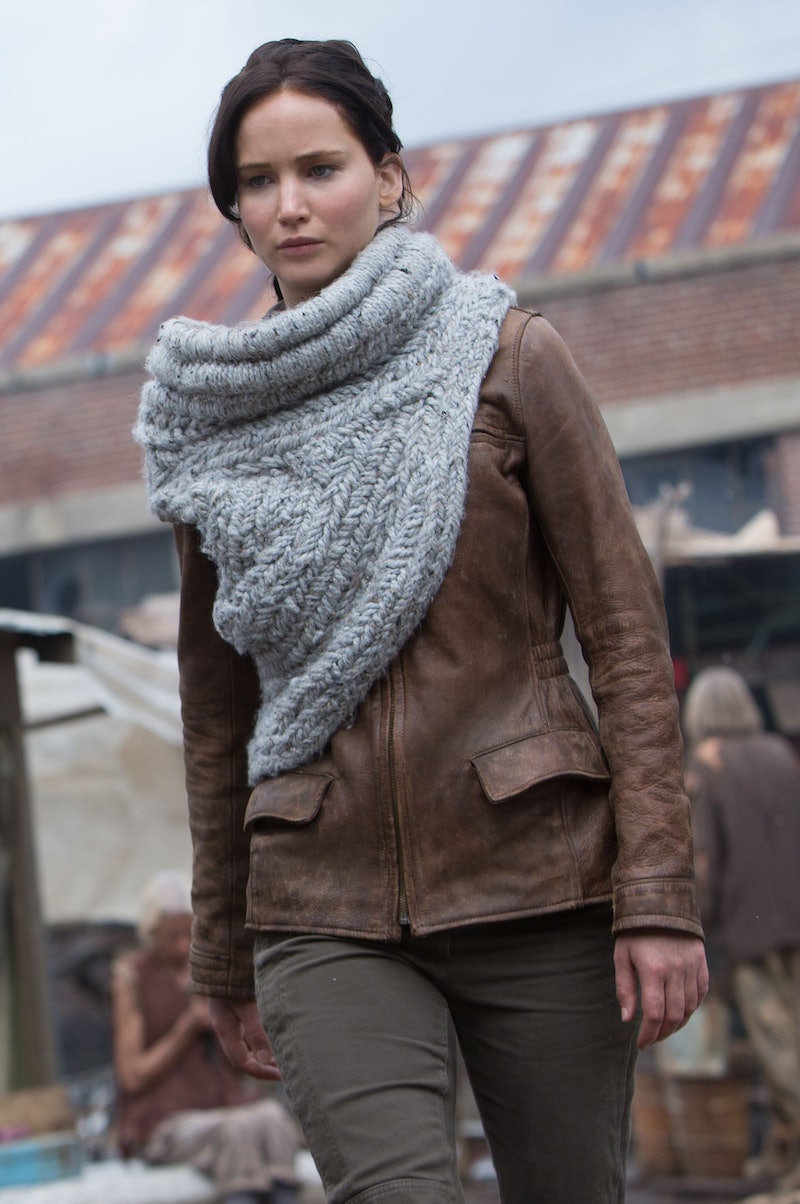 London just became home to the Katniss Everdeen wax figure and Madame Tussauds has really outdone themselves with this one. It looks so lifelike that when I first saw it I thought it was a Catching Fire promotional poster I'd somehow missed last year. But the realism of the figure isn't even the best part of the London wax museum's installation. The artists behind the statue put a lot of work into getting her to look just like Jennifer Lawrence — and she does — but she also stays true to the Katniss from the books from her facial expression to her clothes. This is a wax figure that even Katniss herself would approve of because there's no Capitol influence. The wax figure is pure Katniss, and it's wonderful.

Take, for example, the facial expression they gave her. Unlike most of their celebrity wax figures, Katniss isn't smiling. She's standing tall, strong, and stoic. She isn't known for her cheerful demeanor. (Can you blame her?) So it would have been wrong to make her more lively for the sake of the selfies fans are going to take with the statue. By keeping her face relaxed, normal, and mercifully devoid of overdone makeup, they've stayed true to the real character the novels and movies portray.

But even better than her facial expression is the outfit they chose to put her in. It's her hunting gear from Catching Fire. You know, her father's leather jacket, gray scarf, worn boots, and her homemade bow and arrows. I love that they didn't choose to put her in her tribute uniform or even one of Cinna's dresses. Those just represent her horrific days fighting for her life in the arena. It's what the Capitol wanted her to look like, not who Katniss actually is.

But frankly I'm glad they didn't even dress her in her black battle uniform from Mockingjay Part 1. Although she looks powerful in it, it still represents a really dark time in Katniss' life. If she could choose how she was remembered I don't think it would be as the Mockingjay. She never wanted that role and took it only to save Peeta's life.

No, Katniss feels most at home and most herself in her hunting gear. As she says in the first Hunger Games book, "The woods became our savior, and each day I went a bit farther into its arms." Having Katniss dressed to hunt is the best way to honor her character.

All their hard work spent producing this lifelike figure was worth it because they truly captured the heart and spirit of Katniss Everdeen. To borrow the line from The Hunger Games: "This is the first time since the morning of the reaping that I resemble myself. No fancy hair and clothes, no flaming capes. Just me. Looking like I could be headed for the woods. It calms me."

That's as close to approval as you can get in Katniss' world and Madame Tussauds should be very proud of their efforts. The statue looks real and even better, it feels like Katniss has come to life.