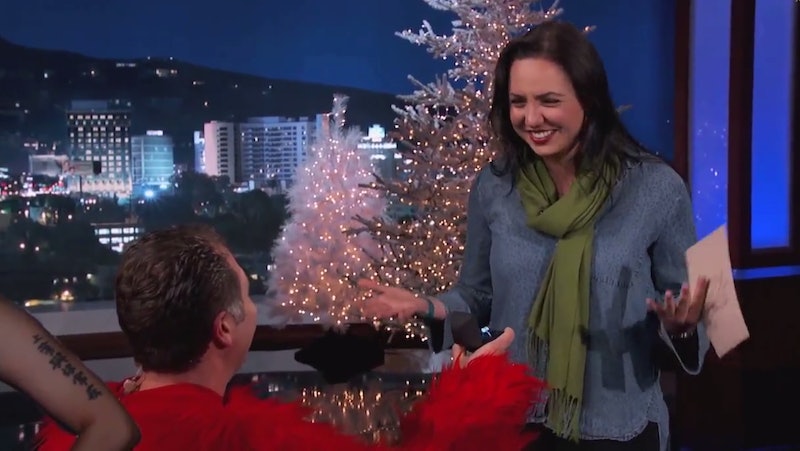 While I think it's safe to say that we're all much more used to watching Jimmy Kimmel Live! clips that are based around pranking the general public in some way — like the fake viral videos, the Lie Witness News segments, and the "I Told My Kids I Ate All Their Halloween Candy" series, the list goes on — it is quite nice to see a genuinely heartwarming clip from the late night talk show that's focused on bringing a little Christmas joy to the world. During Wednesday's episode, Jimmy Kimmel helped a man propose to his girlfriend — and yep, it was just as adorable as it sounds.

I won't spoil any of the video for you because it really as better viewed than read about, but here's the basis of the clip: Basically, Kimmel invited an audience member on stage for a Christmas-themed scavenger hunt that was introduced as just another normal, random segment involving a normal, random audience member...but, turns out, her boyfriend was in on the whole thing, because he comes out in an Elmo costume soon after. It's pretty sweet, especially with all this Christmas spirit stuff going around and all.

"Sandra was not randomly chosen," Kimmel explained to the audience during the segment. "Sandra's boyfriend David reached out to us and asked if we could help him propose to her. Sandra thinks David is home in Orange County right now, but in fact, the guy in the Elmo costume out there, that guy, that’s him! That’s the guy that’s going to propose to her."

You can check out the clip below. Congrats, guys!

More like this
After The Bling Ring, Nick Prugo Was Embroiled In Another Scandal
By Arya Roshanian
The 'Bachelor In Paradise' Schedule Shifts To 4 Hours Every Week After The Season 8 Premiere
By Brad Witter
Everything To Know About 'RHOA' Season 15
By Gretchen Smail
Everything To Remember About Lace Morris Before 'Bachelor In Paradise' Season 8
By Grace Wehniainen
Get Even More From Bustle — Sign Up For The Newsletter