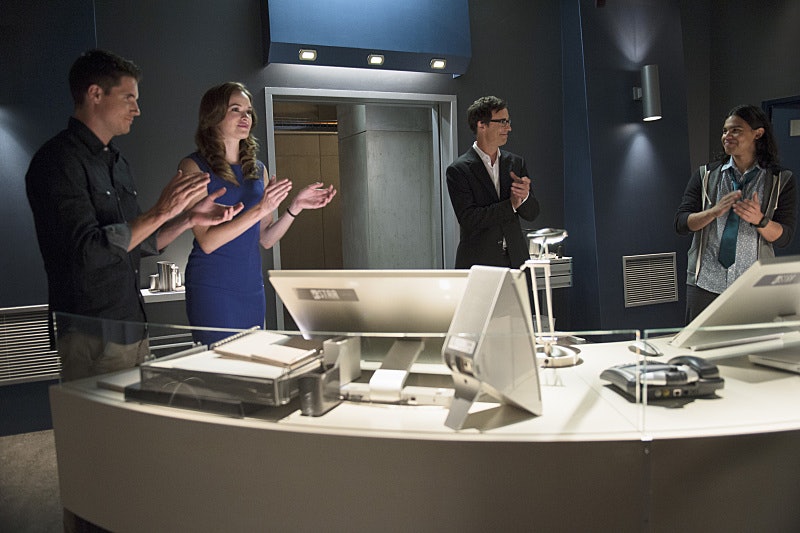 In The Flash's action-packed midseason finale, Dr. Harrison Wells was revealed to be a bad guy — probably. The mystery never seems to end with the head of S.T.A.R. Labs, which is why during my interview with Robbie Amell, who plays Ronnie Raymond, aka Firestorm, I had to ask him about what's ahead for Harrison Wells when The Flash returns. Just how evil he is remains to be seen, but the mysterious character is definitely living a double life that could endanger all of the people around him — especially Barry, Caitlin, and the rest of S.T.A.R. Labs. And now that Ronnie is officially back from the dead as metahuman Firestorm, there's a lot of questions surrounding him, particularly whether he knows anything about Wells' plans.

Amell, who can also be seen in the upcoming movie The Duff , reveals that he's just as in the dark as fans about Wells. "I don't think Ronnie knows any more than is let on about Wells' position. Ronnie worked at S.T.A.R. Labs for a long time and holds Wells in a position of respect. I don't think he suspects anything," Amell says. "I think he's in the same position as Caitlin and everyone else who is close to Wells."

But with that being said, Amell doubts that the truth about Wells will take long to come out. "I think it's kind of a ticking time bomb with Wells," he says. "You can only keep something like that secret for so long, especially surrounded by other people with super powers in the position to be looking for another bad guy or looking for answers."

No matter what happens with Wells, Amell has big plans for Firestorm: facing off against Oliver Queen — aka Amell's own cousin (and fellow CW star) Stephen Amell. "I'd love to be on Arrow, for sure, opposite my cousin," he says excitedly. When I ask who would win in their fight, he immediately announces his future triumph.

"OK, let's be honest here: one of us can fly, shoot fire out of our hands, and go nuclear, and one of us has a bow and arrow. There's no denying it: he's screwed. He's totally screwed," he argues. "He was lucky they let Flash go easy on him in the crossover episode. I'm sure Stephen will really hate this interview."