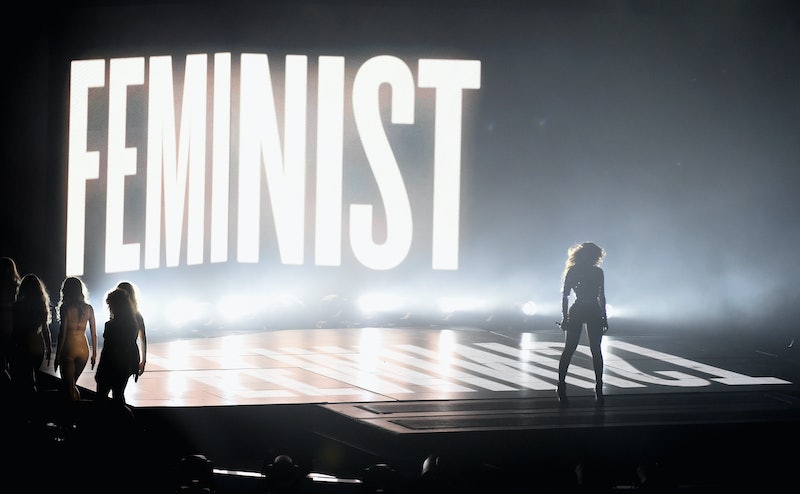 I wouldn't be so optimistic as to call 2014 the absolute best year for feminism, but the movement did at least enter the public conversation so often that TIME Magazine suggested the word feminist should be banned. That mistake aside, it seems like all our favorite celebrities have been asked at one point or another over the course of the year whether they consider themselves a feminist or not. Some of their answers were in the positive, some of their answers were in the negative, some of their responses were backed up by corresponding action, some of their responses were all they felt needed to say or do. So how did your favorite celebrity respond to the feminism question? I made a graph of their answers.

Although the graph is by no means comprehensive, many answers to the question fell somewhere on the spectrum between confirmed feminists, confirmed non-feminists, and celebrities who were saying no to a pervasive stereotype of what they believe feminism to be about. Then, there were some celebrities who identified enough as feminists to take steps to pursue feminist causes or goals. Who can forget Emma Watson's infamous U.N. speech for #HeForShe or Kristen Stewart's Twilight competition for female filmmakers? Who can forget Tom Hiddleston and Benedict Cumberbatch coming forward to support #HeForShe? Who can forget Taylor Swift and Beyoncé's near-constant attempts to more clearly define the word feminism and point out instances of sexism in society that might otherwise go unnoticed?

In the middle of the spectrum, we have celebrities like Lily Allen, Lana Del Rey, and Shailene Woodley. Allen's confusing statements about whether or not she is a feminist — plus equally confusing "feminist" hits like "Sheezus" — prove she still has a long way to go in understanding both the movement and her own place in it. Woodley is notable for being one of the most feminist-minded celebrities out there right now, and one who doesn't actually identify as a feminist. Meanwhile, Del Rey has simply stated that she's not interested in feminism at all and hasn't spoken of it since.

As we go further out into the range of non-feminists, we have celebrities like Jenny McCarthy who is actively against feminism as a political statement and actors like Robert Downey Jr., whose response to the feminism question was to call it "make believe." (That one still hurts me deeply coming from the mouth of Tony Stark, who freely admitted Pepper Potts was much more capable of running his company as CEO than he was.) Whether you agree with where your faves fell on the spectrum or not, the fact still remains that 2014 was a good year for feminism at least in terms of getting more people to talk about it, to talk about what it means, and to talk about how it fits into their lives. Here's hoping that 2015 brings even more people into the conversation.

Check out our graph below.

More like this
Beyoncé’s Special Tribute To Sister Solange Was Both Touching & Hilarious
By Stephanie Topacio Long
Everything To Know About Taylor Swift’s 10th Studio Album, 'Midnights'
By Grace Wehniainen and Jake Viswanath
There's A Taylor Swift Easter Egg In Ryan Reynolds' 'Deadpool 3' Teaser
By Marina Watts
Self Esteem's “F*cking Wizardry” Is An Anthem About Knowing Your Worth
By El Hunt
Get Even More From Bustle — Sign Up For The Newsletter