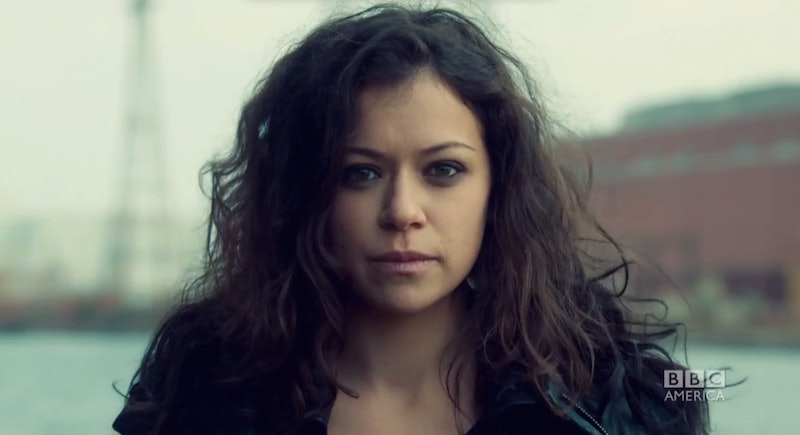 Though there's sadly still a few months to go before season 3 of Orphan Black premieres on BBC America, we're already starting to get our first glimpses of the upcoming season and what the future has in store for our favorite clone seestras, Sarah, Cosima, Alison, Helena, and Rachel: The first teaser trailer for season 3 of Orphan Black has hit the web, and it is good.

While it doesn't do much in the way of giving away important plot hints involving spoilers or anything like that, it does do a pretty good job of giving us ideas about what plots could be involved in the show's sure-to-be epic third season — which, of course, is welcome after that doozy of a season 2 finale which involved the (SPOILER ALERT!) reveal of a male set of clones created for use by the military.

So, what can we maybe possibly expect? Based on the collective explanation we're getting from all the characters in this promo, including Sarah, Cosima, Alison, and Helena, it looks like things are about to get very real in season 3:

Now, I don't know if this is just because this is a teaser promo or if it's really a hint that Orphan Black's brainiest (and my personal favorite) clone could be finding a cure for her life-threatening ailment in season 3, but, going from this clip, it certainly seems to be so — if you remember, in season 2, Cosima was basically on the edge of death. Now, however, she seems fine. Does this mean she's going to survive for sure?

The Clones Are Gearing Up For War

"This is a fight for knowledge," Cosima says as the promo begins, before the scene shifts to a wild-haired Sarah, who says, "this is a fight for war." Helena, then, bloodied and battered, says something in Ukrainian that I honestly can't translate, before Alison steps in with: "Those with power do not give it up easily." Considering season 2 ended with the clones on bad terms with the Dyad Institute, and in the collective agreement that they needed to find out where they came from, it makes sense that war would be imminent — and it looks like they're totally ready for it.

We're Going to See a Lot More Of the Male Clones

Ari Millen, who was first introduced on Orphan Black as Mark Rollins before it was revealed that his character was actually just one of many male clones designed for military use, makes a chilling appearance in the trailer — suggesting that we're going to be seeing a lot more of him in season 3. That, coupled with the first season 3 picture depicting Sarah and a male clone (Millen) sitting in a room together definitely proves it.

Hopefully, this isn't the last Orphan Black teaser we're going to be seeing for the near future — because seriously, after watching this and knowing season 3 won't premiere until April 18, 2015, I am about to have an Orphan Black-related coronary. I NEED SEASON 3 NOW.