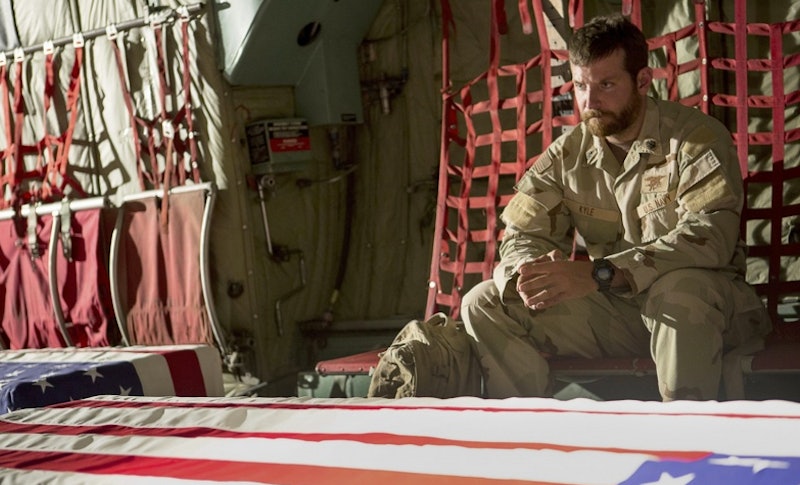 Everything we know about American Sniper at this juncture points to it being one of those kinds of movies in Bradley Cooper's career: One where he's thrown himself so thoroughly into the mix both emotionally and physically that "awards nominations" seem like a default conversation topic, snubs and all. So for better or for worse that's what's in my mind with every new clip from this movie, and the second American Sniper trailer does not disappoint on that front.

Forget that the first time this film really attracted attention was when we all collectively noticed Cooper's physical "transformation" (read: slight bulking up) in short-shorts. It's clear two trailers in that this is a Serious Movie, in which Cooper and director Clint Eastwood will delve into the mental and emotional ramifications of pulling the trigger on over a hundred people. As Bustle's own Tanya Ghahremani put it previously, "films about war are often hard to translate to screen in a raw, honest way, and many times they end up more about the action and the violence than the emotional toll that comes with serving in the military."

This newest trailer, which Warner Bros tweeted out Thursday, most definitely emphasizes the relationship between Chris Kyle's family life and the weight of his work. You can watch for yourself below. The film comes out Dec. 25.

More like this
A New Scooby-Doo Movie Confirmed Velma Is Gay & Twitter Is Pumped
By Radhika Menon
At 14, Jurnee Smollett Was Taking Meetings With Missy Elliot & Lauryn Hill
By Chloe Foussianes
Everything You Need To Know About ‘Black Panther: Wakanda Forever’
By Bustle Editors
Christian Bale Sang With Taylor Swift & His Daughter Can't Believe It
By Radhika Menon
Get Even More From Bustle — Sign Up For The Newsletter