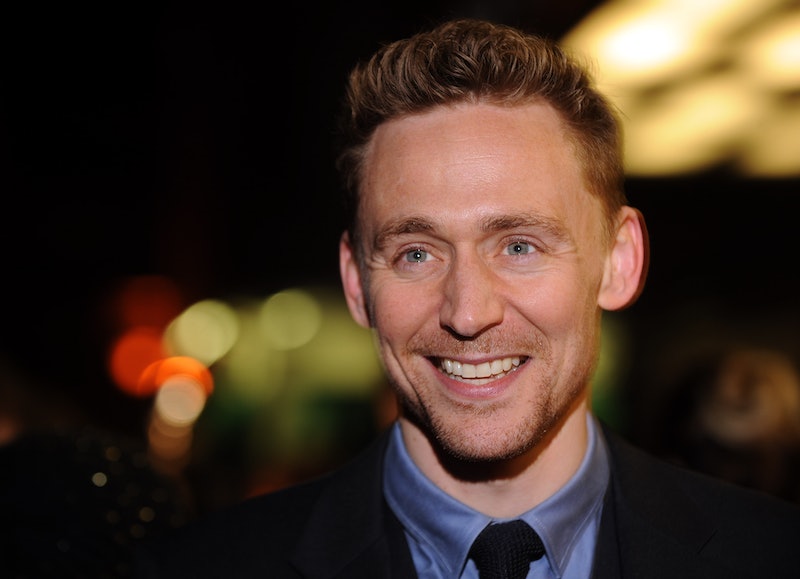 Happy New Year! OK, we're not quite there yet, but 2015 is right around the corner meaning most of us are thinking long and hard about our resolutions. Will we vow to eat healthier? Will we vow to exercise more often? Will we promise ourselves to work less and play more? Whatever we choose, New Year's resolutions are a way to push people to do something for themselves. But, as we all know, many don't follow through with their resolutions. Some might start off all gung-ho, but, eventually, life gets in the way and soon resolutions lose steam. However, that doesn't mean some don't succeed. Take Tom Hiddleston, who I am almost positive takes his New Year's resolutions seriously.

Hiddleston had an amazing 2014, so why wouldn't he want to also have a fantastic 2015? Resolutions can help with just that to make him that much more successful and famous. Well, I have a feeling he already has some resolutions lined up, but just in case here are a few of my own that I came up with. You can just call me Hiddleston's New Year's resolution assistant. It's hard to beat the actor's accomplishments of 2014, but seeing as he is one talented man, there's no doubt in my mind that he can make next year even better with one, two, or all of these resolutions.

Win So You Think You Can Dance

Hiddleston's dance moves have taken the world by storm. Can you imagine him on Fox's SYTYCD? Yeah, he'd be amazing and would win, of course.

Sorry, Thor, but Loki has one huge fan base hoping he can eventually beat the hero sporting that heavy hammer. With his long locks, mischievous smile, cunning ways, and smarts, Loki can totally do just that.

Get Everyone to Believe in Gender Equality

Hiddleston is a firm believer in gender equality, so it makes sense that he'd want to get everyone to believe in equality for all.

Star in Another Movie with Benedict Cumberbatch

Hiddleston and Cumberbatch already starred in Steve Spielberg's War Horse, but it's about time these two play the leads in a movie — together.

Thank Each of His Hiddlestoners Personally

It's no secret that Hiddleston appreciates his fans aka Hiddlestoners. I'm sure one day he'd like to thank each one personally and 2015 might be the year for that.

Host the Golden Globes or Any Awards Show

Raise your hand if you think Hiddleston would do an amazing job hosting any and all awards shows. Yep, that's what I thought. Imagine if Hiddleston co-hosted with Cumberbatch. Whew. What a show that would be!

Release His Own Album

Not only can he sing, but Hiddleston is also starring as Hank Williams in I Saw the Light. I have a feeling his own album would rock the charts, especially a Christmas one!

Win All the Awards

Hiddleston isn't just an actor because he's good looking. He acts because he can. Seriously, he's played a variety of roles (even Captain Hook in The Pirate Fairy !) proving he needs to win all of the awards, stat.

Hiddleston is known for his inspiring quotes. He can motivate anyone and everyone to follow their dreams and go after their goals. This is one book I'd read every day.