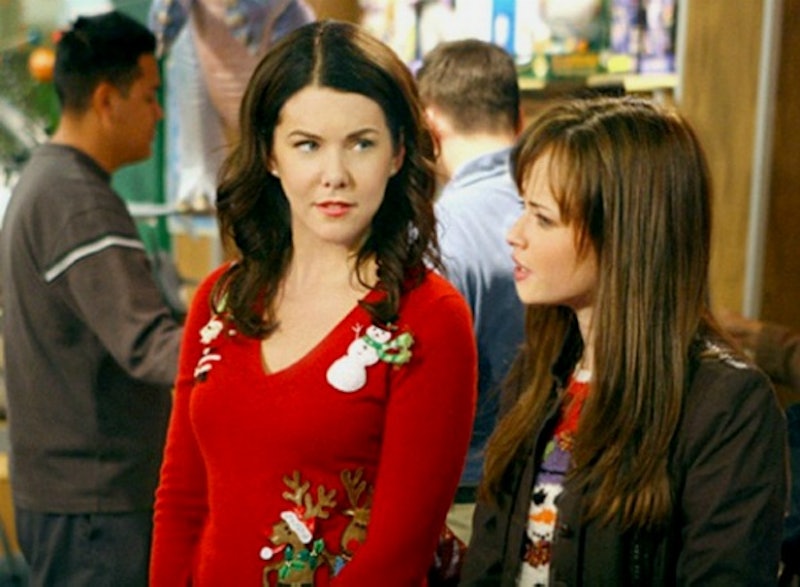 Lest we forget, 2014 was the year Gilmore Girls came back into our lives, sashaying onto Netflix and keeping on a strong nostalgia high for weeks on end. Although I personally didn't watch the show the first time around, I spent all of October and November falling in love with the inhabitants of Stars Hollow, at least until I slowly dredged through season seven. In any case, after being given the gift of Gilmore Girls, I feel as though we all deserve something beyond the soon-to-be a Gilmore Girls reunion. That is, a brand new Gilmore Girls Christmas special!

While it left us with the occasional Christmas episode in it's prime, I really feel like the holidays would be the best time to reconnect with our old friend. Slight problem, though: the series went off the air back in 2007. But armed with Christmas spirit and two cups of coffee, I'm more than happy to improvise just how the Gilmore's and their friends would be faring seven years later as they celebrate the holiday. I wouldn't call myself a hero, per se, I'm just doing my job.

Here's how I imagine a very Gilmore Girls Christmas would go down now, but approach with caution, spoilers ahead!

Lorelai decides last minute to host a 1980's themed Christmas at the Dragonfly Inn. It's kitchy! It's crazy! But it's totally almost ruined when Richard and Emily decide to host their own fancy Christmas party the same day. As Wham! plays in the background and Paul Anka chews on a fur-trimmed stocking, Lorelai flits around desperately to get the party going, fearful that her mother has ruined Christmas, as her mother seems to have ruined everything in her life ever, somehow. She does get weepy, however, when Rory gifts her a Keurig. Now she'll barely have to make an effort to have coffee in the morning.

It's a Christmas miracle.

Young Rory had dreams of being the next Christiane Amanpour, but given the state of modern journalism, she had to rebrand to something a little more... fluffy. For what it's worth, she's made the most of her love of books and pop culture with the Hellogiggles column, "Classic Literature, as Told in Emojis." She has over four thousand followers on Twitter, and she is not un-proud of that.

Now freshly 30, she's showing substantial anxiety about her current lack of a steady boyfriend at the Christmas party, having moved on to a string of long-term mistakes post-Logan. That said, her and Jess, now the writer of three wildly successful e-books, still have clandestine late-night text sessions. Stay tuned.

Luke and Lorelai have since gotten over their fractured engagement and her quick marriage to Christopher, but they still remain officially unattached. Will they? Won't they? While the duo seems endgame, it also seems like they want to keep up this on-again, off-again flirtationship way into middle-age. He does, however, swoop in like Prince Charming decked in flannel when Sookie passes out due to exhaustion, making Santa Burgers for the whole group.

Still happily married, but dragged down by the weight of three children. Sookie misses sleep desperately, but when Lorelai called saying she needed a cartel of food at 11:30 pm, well, she HAD to help. Unfortunately, it was not without a few accidents here and there. Yes, she burned her hand on the braised quail, but the doctor's said the bubbling should go down in a few weeks.

Emily spitefully threw together her famous stuffy Christmas party after Rory made an off-hand remark about Lorelai's '80s shindig at dinner. Originally it was going to be on Sunday, but how DARE Lorelai not invite her and Richard. It became a whole thing. Ultimately the elder Gilmores did show up, saving Rory the awkward task of trying to juggle two parties.

Michel is still filled with loathing for the world around him, but in his spare time runs a successful Celine Dion blog that gives him some semblance of joy. He updates it on his iPhone sporadically throughout dinner.

Paris, although still fresh from her medical training is one of the most respected (albeit callous and feared) doctors at John Hopkins Hospital. And with Doyle at her side, chattering about he sold his start-up for a cool 2 millions, it seems as if she's calmed down a bit. While she nibbles on a Michael Jackson gingerbread cookie, she makes an offhand remark to Rory that explains it: "Xanax helps."

Yeeeeah, Lane and Zach tried to work out it, they really, really did, but eventually Lane realized the hard way that getting married at 22 is wildly fucking ridiculous. Her and the twins now live in a small ranch house on Peach Street, and she's making it work, despite Zach being consistently late on his child support bills. Rory and her have a friendship that primarily exists A. on Facebook or B. during the holidays. It's harder to feign during the holidays, and when Lane asks Rory if she heard the new track she mixed on Garage Band last week, she can see through Rory's transparent "Uh, yeah, it felt very Pixies influenced." Bullshit.

Kirk eventually settled on one consistent job, opening a Starbucks across the street from Luke's Diner. Luke, subsequently, is slowly brewing a holly jolly aneurysm. Kirk and Lulu have one creepy anemic-look son named Derrick, who is constantly propped near the sugar-and-milk station, smelling like brie cheese and boasting a vacant expression. Nobody invited him, but they're not going to reject his five dollar gift cards, you know?

More like this
The Best 'Grey's Anatomy' Intern Moments, From MAGIC to Glasses
By Grace Wehniainen
24 Years Ago, 'Friends' Dropped Its Most Underrated Ross & Rachel Episode
By Grace Wehniainen
Netflix Reveals First Look At Wednesday In The 'Addams Family' Spinoff Series
By Bustle Editors
The Spice Girls Just Dropped A Brand New Music Video
By Sam Ramsden
Get Even More From Bustle — Sign Up For The Newsletter