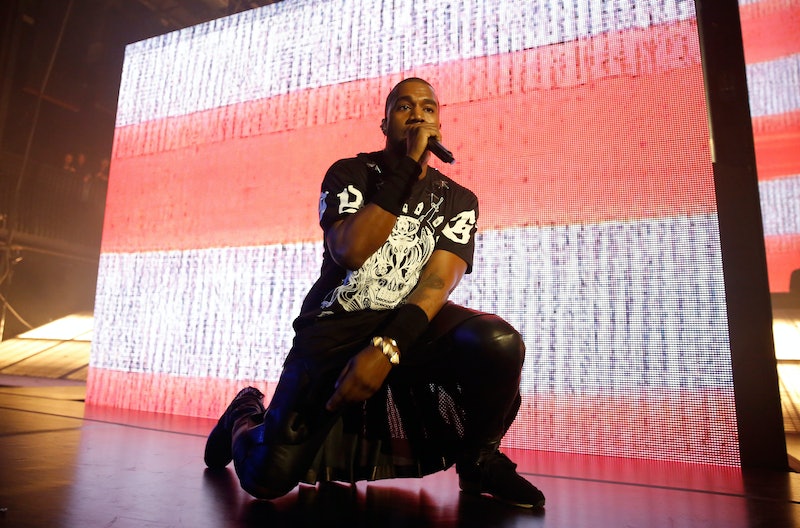 Here we are all asking how it could possibly be the end of the year already. Didn't I just file my taxes? Didn't Game of Thrones JUST end? We're all incredulous and reflective and, naturally, a little (or a lot) sad about all the things we failed to accomplish in 2014. We hold ourselves to high standards! And you know who else does? Kanye West, Yeezus himself. Kanye definitely considers himself a genius, and I don't think I would altogether disagree with that statement. He's made waves, good and bad, throughout his career, and 2014 was a big year for Kanye. He dedicated a lot of time to being a family man to wifey Kim Kardashian and best-dressed baby North West after he got married in the most liked-on-Instagram wedding of all time.

And yet, an air of melancholy stilled haunted Kanye this year. I'm referring, of course, to the snapshot from a ziplining excursion with his beloved Kim. She smiles and poses for the camera with the instructor in her helmet and gear, looking sexy somehow, as always. In the background, though, Kanye paints a different picture: he sits, slumped, dejected in his ziplining outfit, staring into the abyss, and the abyss staring back.

To Sad Kanye I say: CHIN UP, YEEZUS! A new year is upon us, and it's a chance to turn all those regrets from 2014 around and better yourself. If you're having trouble coming up with New Year's resolutions, don't fret, because I've brainstormed some ideas for you. You're Bound 2 have a good year, so don't be so sad.

Maybe the reason Yeezus was so sad in 2014 is because his choice outfit was a stark white suit. Perhaps a much bigger chunk of his budget than he anticipated went to Tide To Go pens and dry cleaning bills than he anticipated. Mix it up, 'Ye! You'd look great in jewel tones!

Get in the Game

Maybe the reason Yeezus was so sad in 2014 is because his success got eclipsed by Kim's overnight success with the Kim Kardashian: Hollywood game. It went from fan obsession to one of the most downloaded apps to her avatar being elected as the number two most influential fictional character by Time. We know that 'Ye is not usually the jealous type with his wife and supports her hustle, but he could probably hone in on the market, too, with a game of his own. Perhaps the goal could be to make the most ridiculous music videos possible. And speaking of music videos...

Maybe the reason Yeezus was so sad in 2014 is because he wasn't feelin' the creative juices flowing to make more music videos. Dawg, "Bound 2" was incredible! Gimme gimme more! Get back in front of that camera in 2015! Uh huh, honey.

Get Back in the Social Media Game

Maybe the reason Yeezus was so sad in 2014 is because he couldn't be himself on the net anymore. In 2013, after going on a "tirade" against Jimmy Kimmel for mocking him in a spoof (I was on 'Ye's team there; he had every right to be mad), Kanye deleted his Twitter account. He later activated it again, but it just... wasn't the same. I miss old school Kanye tweets, including the gem above, and my personal favorite: "I specifically ordered persian rugs with cherub imagery!!! What do I have to do to get a simple persian rug with cherub imagery uuuuuugh". These are the kind of tweets I want to see in my feed.

I Am a Blog, Hurry Up With My Damn Croissants

Maybe the reason Yeezus was so sad in 2014 is because he missed his long-defunct blog Kanye Universe City. If you're not fortunate enough to have read the Faulkner-esque stream of consciousness that was Yeezy's blog, it was a magnificent manifesto of 'Ye's personal thoughts and all the art and fashion that he loved. Personally, I will never forget when Yeezus implored in all caps: "YOOOO WHY WON’T YOU LET ME BE GREAT!!!" Come back to the blogosphere in 2015, Kanye. We miss you.

Maybe the reason Yeezus was so sad in 2014 is because he was snubbed at the Grammys. I know this one is kind of out of his control, but maybe if he puts out some positive energy in 2015 he'll win a statue at the Grammys in January. Last year he was pretty pissed about being snubbed, saying "I’m 36 years old and I have 21 Grammys — that’s the most Grammys of any 36-year-old. Out of all of those 21 Grammys, I’ve never won a Grammy against a white artist." Pretty valid point, 'Ye.

We know life is tough for a creative genius, but dang, Yeezy. Don't be so sad! You've got a beautiful wife, tons of great albums behind you, and the most badass little daughter possible. There's tons of good in your future! Be happy about it, baby!

More like this
Kanye West Apologizes To Kim K "For Any Stress I Have Caused" In Rare Interview
By Jake Viswanath
Kim Kardashian Reveals Her Response To Kanye’s Fashion Opinions
By Jake Viswanath
Confusion Reigns After Kanye Changes His Instagram Profile Pic To Kris Jenner
By Jake Viswanath
Everything To Know About Taylor Swift’s 10th Studio Album, 'Midnights'
By Grace Wehniainen and Jake Viswanath
Get Even More From Bustle — Sign Up For The Newsletter