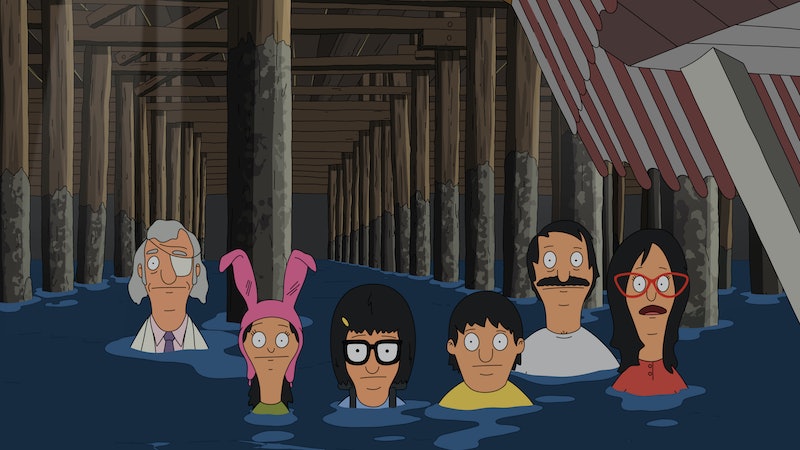 Bob's Burgers is seriously — seriously — one of the best shows on television. And when one of the best shows takes a hiatus, it can make fans panic and wonder when is Bob's Burgers back? But, there's no cause for alarm, Belcher-family lovers. Although there will be no new episodes for the rest of 2014 (including Sunday, Dec. 21), the next episode "Midday Run" will be on Jan. 4 — the first Sunday of 2015. Phew. Thank you, Bob's Burgers for only taking two weeks off — I can't imagine Linda and her can-do attitude would have it any other way.

The last episode of 2014 (the fantastically named "Tina Tailor Soldier Spy") aired on Dec. 14 and featured Tina and Louise going undercover to figure out who was the mole in the Thundergirl (their equivalent of the Girl Scouts) troop. After some covert moves, Tina was able to discover which girl in her former Thundergirl troop was giving away the top-cookie-selling secrets to their evil, competing troop. Meanwhile, Linda went blonde (thanks to her epically ridiculous hair stylist and friend Gretchen) and was too distracted by the idea of blondes-having-more-fun to worry about what her kids were up to or to adequately help out Bob in the kitchen. You know, just the standard antics of the quirky and lovable Belcher family.

Now, if you were confused as to why the Christmas episode ("Father of the Bob" — oh how the writers' puns make me so happy) aired on Dec. 7, and then was followed by the non-holiday "Tina Tailor Soldier Spy," the show's recent time slot move may have something to do with it. On Nov. 16, Bob's Burgers switched from its 7:30 p.m. Sunday time slot to 9:30 p.m. (after Family Guy). It swapped places with Mulaney — the Seinfeld-ish freshman Fox show that is not faring well. I'm just happy that Bob, Linda, and the kids are in a more prominent time slot now since it should help continue to get them the attention they so desperately deserve.

I thought Bob's Burger's Season 5 Thanksgiving episode, "Dawn of the Peck," was stronger than "Father of the Bob" (Linda had to be the hero with sidekick Teddy to save the town being overrun by crazed poultry birds. And Bob got hilariously drunk). But "Father of the Bob" has some amazing actors providing the voices (as always), with my number one homeboy and frequent Bob's Burgers collaborator, Bill Hader, providing the voice of Bob's dad. Plus, Carl Reiner, Jordan Peele, and the unmistakable Nick Offerman joined in on the yuletide fun.

If you missed the Belcher's Christmas episode, don't pout. Fox will be airing it again on Dec. 21 at 7:30 p.m. They will also be showing Season 4's Christmas special "Christmas in the Car" that same night at 9:30 p.m. If a double dose of Belchers on Sunday isn't enough, switch from Fox to Cartoon Network to get your fill (plus, you always have Hulu and Netflix to watch the show too).

Or you can always watch pre- Bob's Burgers John Roberts (who provides Linda's voice) showing how ideal he was for the show in his Youtube video "The Christmas Tree." (I've been watching it every December since it was posted in 2006. "Hey! Whadda ya mean ya ain't taking a picture by the tree?!")

So, you can still spend your holidays with the Belchers. And then just make sure to start your new year off right by catching Bob's Burgers when it returns on Sunday, Jan. 4 at 9:30 p.m.