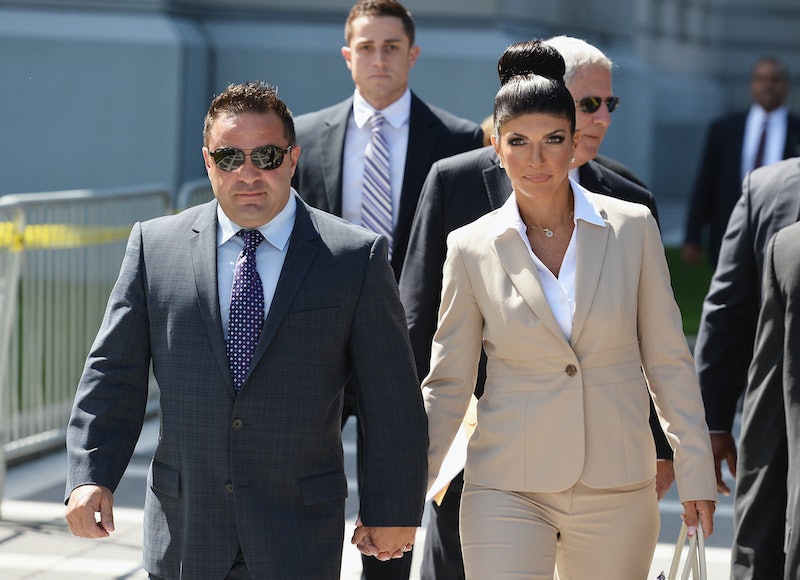 Don't believe everything read — this old phrase seems to go for a new report about the Giudice family. On Thursday, websites including Radar Online reported that Teresa and Joe Giudice's home was raided by federal agents who seized cash, plasma TV's, jewelry, and even their kids' Christmas presents. The website also said their property was seized "to satisfy the couple’s outstanding restitution after they had failed to set-up a payment plan."

Per Radar's insider, Teresa was shocked by the raid. This source said, “She had no clue they were coming. She was absolutely hysterical, and begging them not to take the girls’ Christmas presents.”

Now, further reports are disputing these claims stating that no such raid ever happened. According to NJ.com, a spokesman for the U.S. Attorney's Office, Matt Reilly, said, "[If] anyone went over there under official capacity, it would be under us." Reilly also said that his office is working with the Giudices on repayment and no such seizure has been ordered.

Radar also provided the following update, per Teresa's rep: “There is no truth to this rumor.”

Even though the rumor of the raid was untrue, there's no doubt that the Giudices are having a bleak time. For those unaware, Teresa and Joe will both soon serve prison time for fraud and tax charges. Teresa will serve 15 months, while Joe was sentenced to 41 months, in addition to $414,000 in restitution fines and a potential deportation. Still, it's good to hear that their children are not being put through any additional trauma — especially if that meant having their Christmas presents taken away.

More like this
Teresa Giudice Flipped A Table — Again —  On The 'DWTS' Season 31 Premiere
By Jake Viswanath
'RHOSLC’s Newest Cast Member Has Tried To Become A Housewife Before
By Jake Viswanath
‘RHOSLC’ Star Jen Shah’s Arrest & Legal Drama, Explained
By Brad Witter and Jake Viswanath
Bachelorette Gabby Kissed Her New Fiancé On 'Dancing With The Stars'
By Jake Viswanath
Get Even More From Bustle — Sign Up For The Newsletter