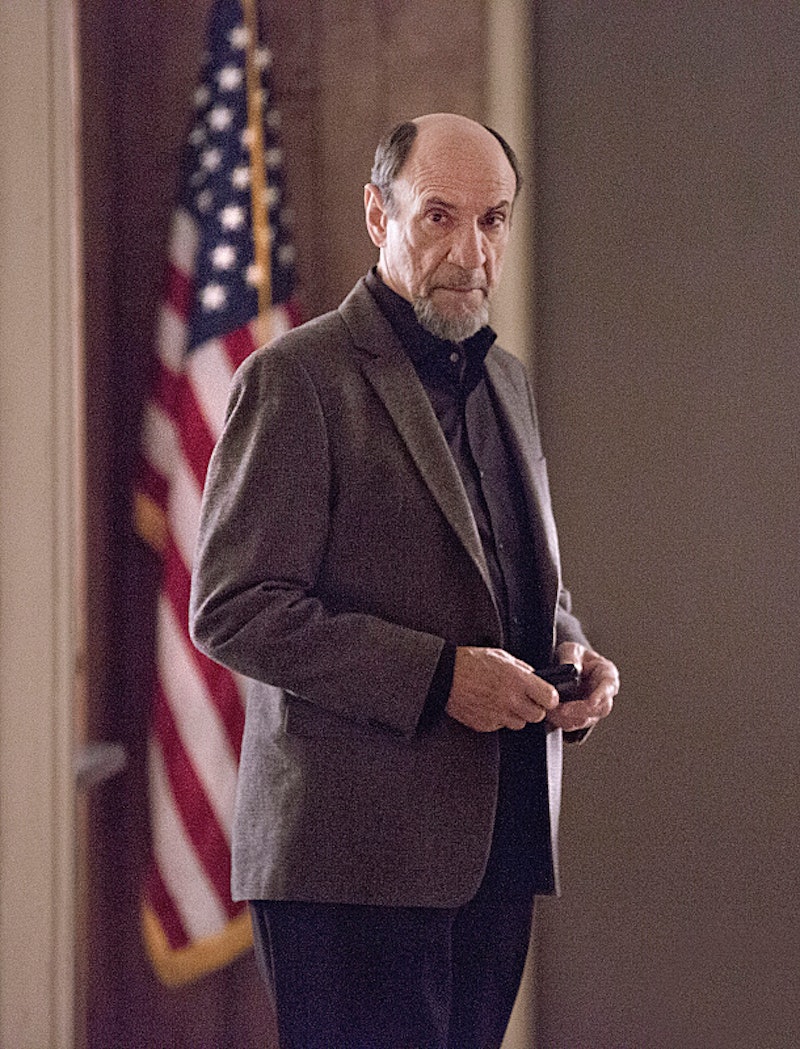 The end of Season 4 of Homeland is here — and while I don't expect to see any big deaths like Season 3's season finale (RIP Brody!), that doesn't mean we won't be seeing some serious drama, particularly with Dar Adal. So what's Dar Adal's plan here? Honestly. Dec. 14's episode of Homeland , "Krieg Nicht Lieb" showed us in the final moments that Dar was in the car with Haqqani in Pakistan. Is he some super undercover agent? Or has he really turned traitor?

I'm not ready to say Dar has turned traitor just yet. It's the end of the season, after all, and that's when Homeland's twists and turns always surprise me. (Have you noticed how much better the show gets halfway into its seasons?) Dar hasn't been very present in Season 4, so it was a shock to see him in the car. His main plot point this season was when he went to check in with Quinn on what happened during Sandy Bachman's death. So, could that mean he had something to do with Sandy's death?

And how the hell did he get to Pakistan in the first place? The promo for the Season 4 finale, "Long Time Coming," doesn't provide us too much insight.

First of all, what's been "a long time coming"?! Dar being a traitor!? The video shows that Carrie will confront Dar in her unabashedly Carrie style. Now, it's important to note that Dar was/is a head for black ops. Black operations are highly secretive, dangerous, and sometimes illegal missions (I say as if I have actual experience with such things). We were introduced to Dar's character in Season 2 when we found out that Quinn was actually working for Dar, and that Quinn's mission was not that of an analyst — but that he was there to kill Brody. So Dar could be up to anything.

Now, Dar Adal has always come across as a bit shady to me. I know he and Saul go way back, but I was super confused as to why Saul relied on him so heavily for advice in Season 3. There was just a vibe I got from him that I didn't like — plus, as many immoral decisions as Carrie, Saul, and Quinn might make, Dar seems to have even less scruples. But would he really betray his country and help Haqqani? What would be the benefit in that?

The other end of the spectrum is that Dar came up with a plan to get the U.S. out of this terrible situation. Lockhart said that they are shopping for his replacement as head of the CIA and that he's not getting any information anymore. He knew something was going down in Pakistan, but he and Carrie were both lacking the details. Could Dar be up for the replacement position?

Maybe Dar is trying to prove his worth by doing some super undercover work to stop this serious terrorist threat that Lockhart, Carrie, Saul, and Quinn have been unable to fix. He could have partnered with Aasar Khan (who I'm still betting on being good) and the non-terrorist-supporting part of the Pakistani government to get into the country. How else would Khan have known that Dar was in the car?

Let's hope that Homeland at least provides us with the answer to whether Dar is helping Haqqani or the U.S. on Dec. 21. It would be too cruel if the show made us wait until next fall to find that out. I'd have to go all Carrie Mathison on Homeland's ass if that happened.