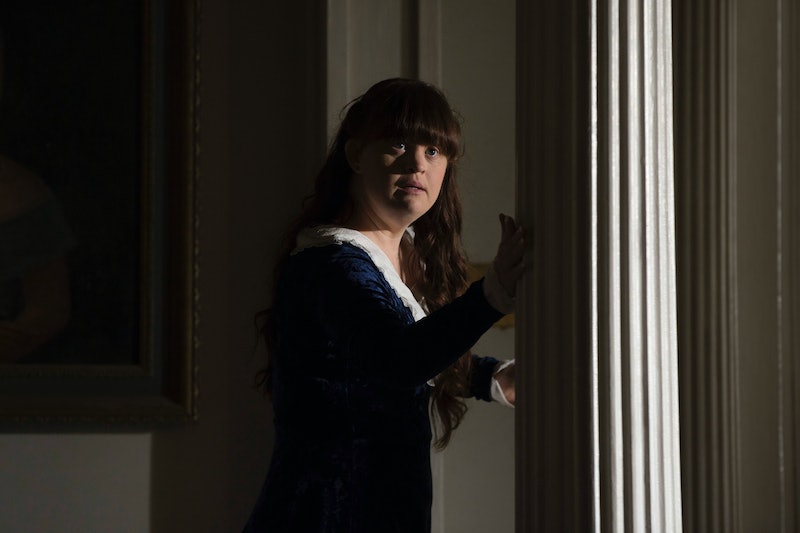 Though our American Horror Story winter hiatus has only just begun ( AHS: Freak Show won't return until January), this FX hit made sure to leave us with plenty to look forward to when Elsa & Co. return in the New Year. At the end of Wednesday night's episode "Orphans," the network unveiled a promo for "Magical Thinking," which featured both Neil Patrick Harris and AHS vet Jamie Brewer! We all knew NPH would eventually be gracing us with his presence, but Brewer proved to be a big surprise. And from the look of things, she's going to serve as part of a very creepy story arc with our soon-to-be Oscar host.

Here's the deal: since Elsa is on her way out to Hollywood, she introduces her sideshow performers to the new owner of their establishment: Chester, played by a very dapper looking NPH. And while he seems charming enough at first (even kissing Bette at one point), things eventually take a turn for the worst — as what tends to happen on a show with "horror" in the title. Though Chester may be able to give even Dandy a run for his murderous money considering he too seems to have a flare for sawing people in half… and not just for magical purposes.

See what I mean? He is legit sawing people in two and I seriously doubt that is what the audience paid for. Red sequins and a top hat will only get you so far, but when you start murdering your paying customer, you're bound to encounter one or two complains. But the insanity doesn't stop there because why would it? Chester also introduces his ventriloquist dummy, which he claims "relaxes" him. Whatever that means.

But the best part is that this puppet looks eerily similar to Brewer's Freak Show character, which I'm sure is totally a coincidence. (And by that I mean, not a coincidence at all.)

Could she be the real-life version of Chester's doll or perhaps an imaginary friend that he's dreamed up? Either way, things just got crazy interesting on AHS and I, for one, can wait to see where it all leads. Is it January 7th yet?

Check out the promo below and get pumped for all the horror that's bound to ensue:

More like this
24 Years Ago, 'Friends' Dropped Its Most Underrated Ross & Rachel Episode
By Grace Wehniainen
Watch The Thrilling Teaser Trailer Of 'Shadow And Bone' Season 2
By Gretchen Smail and Jack Irvin
Jeffrey Dahmer’s Arresting Officer John Balcerzak Got His Job Back After Being Fired
By Grace Wehniainen
Gabby Petito’s Family Responded To The New Lifetime Movie About Her Final Days
By Grace Wehniainen
Get Even More From Bustle — Sign Up For The Newsletter